The Importance of Attachment Parenting a Newborn |
AD 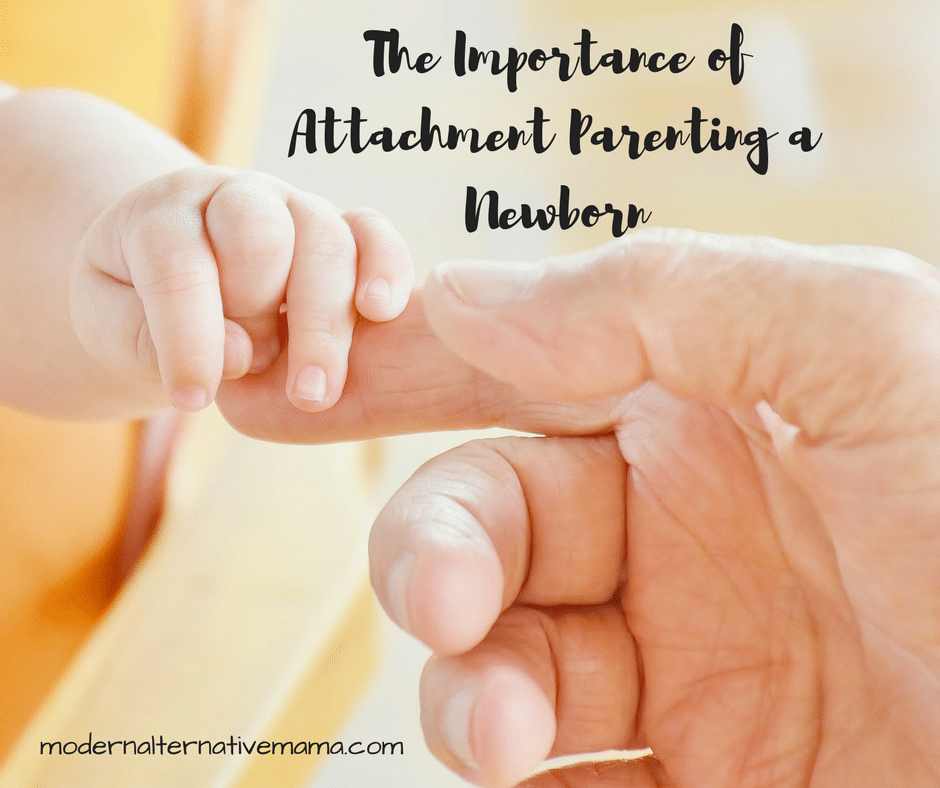 The Importance of Attachment Parenting a Newborn

Natural and crunchy living has become in vogue, and more and more parents are converting to this lifestyle.

We’ve seen that the unattached way of life that we were brought up in and which surrounds us is not doing us any favors. We see that people are more emotionally challenged than ever. We are doing something wrong, and it’s time to correct it. But, what does attachment parenting really entail and how does it benefit your newborn? Let’s look into the facts and science of this movement.

What is attachment parenting?

Attachment parents usually prioritize the time following birth. They keep the baby on the skin of the mother (or father) and allow them to find the breast. They opt out of allowing the baby go through treatments, be with the nurses, or go to the nursery.

Baby-led weaning is a common practice amongst attached parents when it comes to offering baby their first solid foods. Baby-led weaning ensures that the baby is emotionally and physically ready to part from the breast and its physical and emotional benefits. It essentially skips the mushy, prepared “baby food” stage. It is minimal work and also ensures the baby’s digestive system is prepared for the type of food consumed.

These are both foreign concepts in the United States, and many “developed” countries today. But, around the world,co-sleepingg is the norm. Science is catching up to what our instincts tell us – it’s safer for a newborn to sleep with their parents.

Co-sleeping is linked to better brain development because the baby attains better sleep knowing their parent (and food) is close. The baby can wake, feed, and go back to sleep without fully waking and crying. This also leads to more and better sleep for the parent, who does not have to get up to calm and feed a crying baby.

The Back to Sleep Campaign (now called the Safe to Sleep Campaign) by the US National Institute of Child Health and Human Development (NICHD) pushed parents into thinking that bedsharing is not only dangerous, but deadly by promoting this idea through billboards across the country. One such billboard even had an image of a baby sleeping with a knife, and compared this with the danger of bedsharing. The campaign encouraged parents to put their babies on their back to sleep, noting that this should reduce the occurrence of SIDS (even though it’s claimed the cause of SIDS isn’t known). Interestingly, there is ample evidence that sleeping on the stomach promotes neurological and physical development rather than the back. It is a cultural norm in Japan to co-sleep, and they enjoy lower SIDS rates. In fact, in many cultures, it’s seen as cruel to not sleep with the child.

A safe co-sleeping set up is required, however. Fluffy or large blankets should be avoided, and a baby should never sleep near the edge of a bed. In between parents, or one parent and a wall is safest in a bed. Co-sleeper bassinets also offer the option to co-sleep, with ample safety.

Another hallmark of attachment parenting is baby wearing. This is the act of carrying the baby in some sort of fabric around the parent as the parent goes about their day. This could be a wrap, ring sling, structured carrier, or a simple square cloth. It’s done differently all around the world – but one thing is the same – the baby stays with the parent.

This helps the child learn about how the world works and human interaction from birth. It makes it easier for the mother to breastfeed. Babies who are worn have been found to cry much less, and it facilitates a close connection between the baby and parent.

Gentle discipline is often used among attachment parenting circles, as well as alternative education. The education may be more hands on. Some examples are Montessori, nature-focused such as nature, farm or forest schools, homescooling or even unschooling.

Attachment parenting has received a lot of criticism from parents who feel like it’s too crunchy and too demanding. I cannot deny that it’s demanding – but I must say that it’s the most important work. Whatever else is consuming your thoughts and time is what is really too demanding in that it can negatively affect you and your parenting.

Attachment Parenting is important to build a healthy emotional relationship between the parent and child because that is the emotional foundation where all of the child’s emotional life will build. Every parent will find their groove and determine which lifestyle works best for themselves and their children. Attachment parenting may be a “new” parenting style in the developed world, but it has stood the test of time in “less developed” countries that are still in touch with nature and human instincts.

Do you attachment parent your newborn? What benefits have you seen?