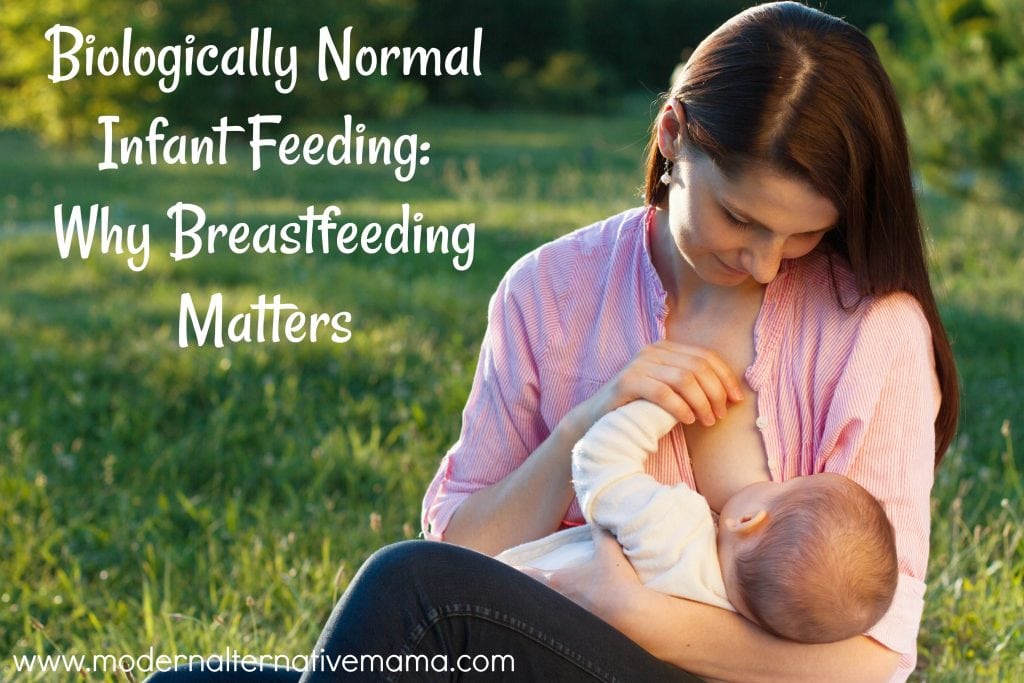 I sat down to write a post on when to start feeding babies solids the other day, and as soon as I dove into the research, I realized it was going to be a lot more complicated than that…so it’s going to be a series instead.

The thing is, we argue all the time about diet — what’s optimal at various ages.  And if we’re going to discuss when babies should start solid food (and what they should eat), then we actually have to talk about what they’re eating before their solids — what type of milk.

This discussion is going to get really thorny, really fast.  Be prepared for that.  My goal here is to share all of the research I’ve been doing, and stick to straight-up information.  We’re looking for what the biologically optimal way to feed a baby is.  There will obviously be other factors that help any mother decide how she should feed her baby (and herself), but we’re not getting into those in this post.  This is just about the facts on ideal diet.

With that said…this is not the place for debating breast vs formula or claiming it’s “mom shaming” because I’ve said something unpopular.  And, if you’re going to say I’m wrong…be ready to back it up.  “I’ve never heard that…” or “But everyone knows…” are not legitimate criticisms.

Now that you’re all nervous, let’s get started. 🙂

What’s the Biologically Optimal Way to Feed a Baby?

I could end the post right there, but…there’s so much more to say about it.

We debate breast vs formula because, at a very high level, both meet an infant’s basic needs.  They both have adequate calories, macro nutrients (carbs, fat, protein) and vitamins and minerals.  They’re both food.  An infant who is fed formula for whatever reason will not die, unless that formula happens to be contaminated or something.  (Or routinely diluted to “stretch” it further.  Don’t do this.  It can kill your baby.)

But right now, we’re not looking at “what works,” we’re looking at optimal.  And again, this is strictly in terms of nutrition, not any other factor.  This is “if anything were possible” and there were no barriers to breastfeeding.

To understand why breastfeeding is the optimal choice, we have to look at actual composition of both breastmilk and formula.  At that high level, yeah, they’re basically the same.  They feed babies.  But as soon as we start diving into the sources of each of those nutritional components, things change quickly.

The Nutritional Composition of Breast Milk

According to this study, “Mature human milk contains:

From the same source, proteins found include:

The carbohydrate is primarily lactose, and also oligosaccharides.

Although these variations exist, they are within a relatively narrow range under most circumstances.  Milk macronutrient composition is relatively similar, although not the same.  It does vary more over the course of a feeding or day than from mother to mother — in general.

Importantly, the amount of micronutrients in milk does vary greatly based on maternal diet (and other factors), especially iron, zinc, and copper.

A 2013 study also notes, “Some of the nutrients of milk originate by synthesis in the lactocyte, some are dietary in origin, and some originate from maternal stores.”

So yes…diet does matter.  We’ll get back to that in a bit.

Breast Milk: Beyond the Nutrients

This discussion wouldn’t be complete without acknowledging that breast milk is not just nutrients.  There are a lot of other components that are important to infant growth and development.

A more recent study, from 2013, says “Human milk also contains many hundreds to thousands of distinct bioactive molecules that protect against infection and inflammation and contribute to immune maturation, organ development, and healthy microbial colonization.”

A 2010 study shows that there are several different types of growth factors in milk, which provide for normal growth and development of various body tissues, including the gut.

A 2016 study shows that certain growth factors play a large role in healthy development.  In fact, they’re so important that scientists are studying to see if they could be used in the treatment of some diseases!

A 2011 study shows that milk-born proteins help develop parts of the nervous system.  (A mother’s touch and physical closeness matters a lot, too, for brain development.  (source))

Interestingly, a 2009 study says this:

“In 2002, the Ad Council conducted focus groups to develop the National Breastfeeding Awareness Campaign, targeted at reproductive-aged women who would not normally breastfeed. They found that women who were advised about the “benefits of breastfeeding” viewed lactation as a “bonus,” like a multivitamin, that was helpful but not essential for infant health. Women responded differently when the same data were presented as the “risk of not breastfeeding,” and they were far more likely to say that they would breastfeed their infants.”

Breastfeeding is far beyond just food.  It is essential to an infant’s long term growth and development in many ways.  It’s not “one of the ways to feed a baby,” it is the biologically optimal way to feed a baby.

The Nutritional Composition of Formula

Let’s take a look at the differences between breast milk and formula.  What is in formula?

What is all that stuff?

Corn syrup solids are the #1 ingredient.  This is a type of sugar, primarily dextrose, that is used to replace lactose (the main carbohydrate babies are supposed to have).  It is not metabolized the same way at all. (source)

Then there is “vegetable oils.”  Palm, soy, coconut, and sunflower.  Remember, a mother’s milk varies in its fatty acid content…so formula manufacturers add the estimated correct percentage and mostly choose cheap oils.  Coconut is the only truly beneficial one here, providing lauric acid.  Palm provides palmitic acid, which does have some benefits too.

So far, this formula has soy, corn, and dairy — three top allergens.  And, although it roughly resembles breastmilk in that it has similar proportions of carbs, protein, and fat — it’s in no way the same.  The sources are entirely different.

What’s the rest of it?  Various (synthetic) vitamins and minerals.

Note that the formula uses folic acid, and most likely cyanocobalamin, two B vitamins that can harm babies with the MTHFR mutation.  There are no commercial formulas available, not even organic, that do not use these currently.  (Read more about MTHFR and formula)

Basically, formula is food that will get a baby through and meet his/her basic needs.  It does not contain probiotics, immune factors, growth factors, or any of the other non-food components that breastmilk does.  And these are important!  Breastfeeding matters for so many reasons.

What About a Breastfeeding Mom’s Diet?

Not a lot of people want to talk about this.  It’s common for people to say “It doesn’t matter what mom eats, her breastmilk will always be perfect.”  And, on the opposite side, people have said “If mom’s diet isn’t optimal, she’s better off not breastfeeding.”

First, breastfeeding is the biological norm and always optimal, barring really unusual circumstances.  Mom’s diet absolutely has an impact on the contents of her milk, especially the micronutrients (which is why diet matters), but even if it’s less-than-optimal, it still has the growth, immune, and other important factors that you cannot get from formula.

If mom’s diet is “less than optimal,” then the obvious thing to do is try to eat healthier, not switch to formula!

So how does mom’s diet affect her milk?

In some ways, we don’t know.  No one has ever studied the impact that particular foods have on milk supply or milk quality over time, outside of a few very specific foods.  It would be difficult to do so.  It would be required for mom to keep careful track of everything she ate and sample milk multiple times a day for several weeks.  That’s just not going to happen.

But we do have evidence that different nutrients do vary in breast milk!

A 1991 study shows that breast milk varies for a lot of reasons.  Things changed more after 3 – 4 months and were fairly stable before that point.  Later, when a mother ate more protein, her milk had more fat in it.

A 2012 study showed that mothers who did not consume DHA and AA (essential fatty acids for brain development) did not have them in their milk.

A 2016 study shows that levels of zinc, copper, and especially iron are closely related to maternal diet.  They noted that women who drank alcohol in pregnancy had lower levels of these nutrients (again, especially iron).  Women who are anemic or tend to be low on iron may want to skip alcohol while pregnant and nursing.

A 2002 study shows that vitamin C levels in milk are “highly correlated” with amounts in the maternal diet.

Many have said that vitamin D is “naturally low” in breast milk, and therefore, supplementation is required.  A 2012 study proves that’s not true.  Vitamin D transfers just fine, if mom isn’t deficient.  If she is, her milk will be, too.  Mothers need about 4000 IU per day or regular sun exposure.  Babies need a small amount of sun exposure, too, especially after 6 months.  A 2014 study confirms this, but uses a daily supplement level of 5000 IU.

(Read more about the importance of magnesium to baby’s health.)

Essentially, many — most — nutrients are affected by a mother’s diet.

Basically, breastfeeding is incredibly to normal infant development — and so is mother’s diet.  A mother should be eating as much nutrient-dense real food as possible, with minimal processed foods.

In particular, mothers need to make sure they are getting enough:

These are highly variable in mother’s milk and incredibly important to infant development.

In the next post, we’ll be addressing when to start solid foods!

Did you know all these reasons why breastfeeding matters?