Why I Hope My Newborn Sleeps Through the Night |
AD 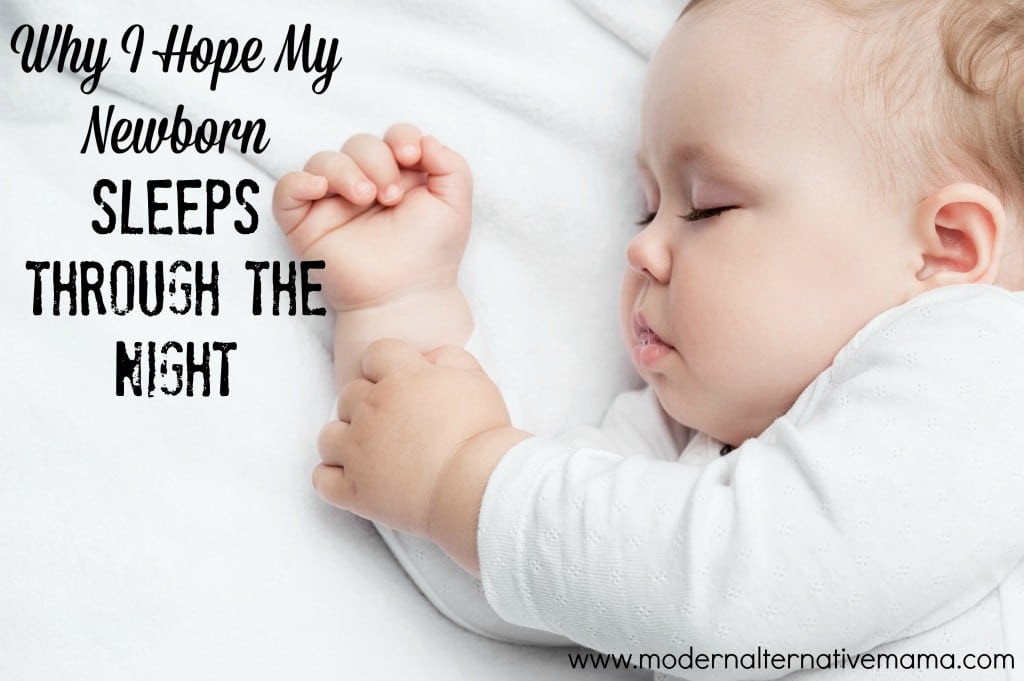 Why I Hope My Newborn Sleeps Through the Night

Yes, I hope my newborn sleeps through the night.  From birth.  So that, you know, I won’t be sleep deprived and stuff.  I have to get up and take care of four other kids in the morning, after all.

What in the world are you saying?!  Babies are not biologically ready or able to sleep through the night from birth.  That could be dangerous!  They need to wake up often and eat, and they sleep more lightly than we do so that they can grow and develop rapidly.  What is going on here?

Hold up a minute.  Let me explain.

Changing Our Definition of “Sleeping Through the Night”

When my oldest was born, I was so tired.

See, the first few nights she wouldn’t sleep unless held or rocked, but she wouldn’t let me lie down with her.  So I sat up most of the night until I was practically falling over in bed, trying to cuddle her so she would sleep.  Then I put the baby swing next to the bed so I could get some sleep, but I was still sleeping with one eye open, just in case she woke and fell out (she didn’t, of course).

After we solved those problems, she had her days and nights mixed up and was a pretty wakeful baby anyway (I remember being amazed at the amount of time she could be awake and calm in those early weeks!).  Sometimes she would be awake for hours in the middle of the night.  I quietly rocked her and she wasn’t fussy, just awake.

I was lucky enough to have other adults there to help, and hold her so that I could catch a few hours of sleep.  But it wasn’t a fun beginning.

My boys?  Well, they mostly slept through the night from birth.

(I definitely don’t mean 12 hours straight, in a crib, in another room.  No way!  They didn’t actually sleep in their own rooms until they were between 13 and 18 months.)

Here’s what I mean: my boys slept with me from birth.  They curled their tiny little bodies in the crook of my arm, right next to my breast.  They slept peacefully, half-waking to nurse when they needed to.  I didn’t have to get up to do anything for them.  I barely woke up to help them latch on.  And they didn’t have random wakeful periods in the middle of the night.  They “slept through the night” in the sense that they slept, nursing when needed, without wakefulness, while I slept.

Why Newborns Should “Sleep Through the Night”

I think it helped that my boys were born at home.  There were no weird hospital routines or bright hospital lights in the middle of the night that disrupted their sleep patterns.  They were steeped in the rhythms and routines of the home from their very first day.

Yes, sometimes they stayed up later than I’d have liked.  Some nights they wouldn’t fall asleep until between 11:30 and 1 AM (and we were typically wanting to head to bed around 10:30).  But once they did fall asleep, I knew I’d have a good 8 – 10 hours where they would mostly just sleep, except for nursing as needed.

No, I have no idea how often they nursed.  I didn’t wake enough to look at a clock.  Just “as needed,” which was probably every couple hours.

I think newborns need this sort of gentle stability from the beginning.  I think it helps to have a general family routine and incorporate the baby into it — while making plenty of allowance for the newborn’s needs, too (like I said, I often stayed up later than I wanted to until baby was sleepy).  I think it helps to have lights off at night, and quiet, so that it’s distinctly different from daytime sleep.

For naps, babies were often laid on the bed “alone” (you know, with me sitting next to them but not holding them) and there was a TV on, people talking, etc.  Or they were upright in a carrier or resting at an angle on my chest….  We did not do these things at night.  We snuggled in bed, in the quiet and the dark.

I do believe that this helped them keep their days and nights straight from the beginning.  It’s not a way to completely prevent that, but I do think it helped.

Why I Hope This Baby is the Same

From day 1, we took our later-born babies through the bedtime routine with the older kids.  We visited each bedroom, kissed them good night, and tucked them in.  We’ll do the same thing this time.

When it’s bedtime for the adults, baby will come with us and snuggle in bed.  We’ll co-sleep, and we’ll nurse on demand through the night.

This gives our family the best shot at staying “in routine” and me the best chance at not being a sleep-deprived mess.  It also gives us the best chance at guiding baby towards independent sleep…very slowly…over a period of many months.  We don’t let our babies CIO, but we do help them (gently) learn to fall asleep on their own.  This baby will almost certainly transition to sharing a bed with a sibling when it is time to move out of our bed.

This also helps me, mentally.  I’ve finally gotten all my children to *really* sleep through the night (10 straight hours, in their own rooms, without needing me) in the last few months — remember my youngest is 2 years old.  I’ve been enjoying being able to consistently sleep for the first time in 7 years.  I don’t want to give that up.  When I think about quietly co-sleeping and nursing without needing to get up, I know I can handle it.  If I had to get out of bed to tend to a baby several times a night, I might lose my mind.

(In case you’re wondering, we will make a small “bed” next to ours — which is on the floor, not a frame — so that I can set baby down if either of us needs our own space for a little while.  And when baby is older we’ll have a pack’n’play again.  Some of my babies slept better in my arms when they were older, and some slept better when they had their own space.)

That’s how sleep works at our house.  I can’t say that it will or should work the same at your house.  But I thought I’d share my story, as an experienced mama.

Does your newborn “sleep through the night?”