5 Reasons You Should Cosleep With Your Newborn |
AD 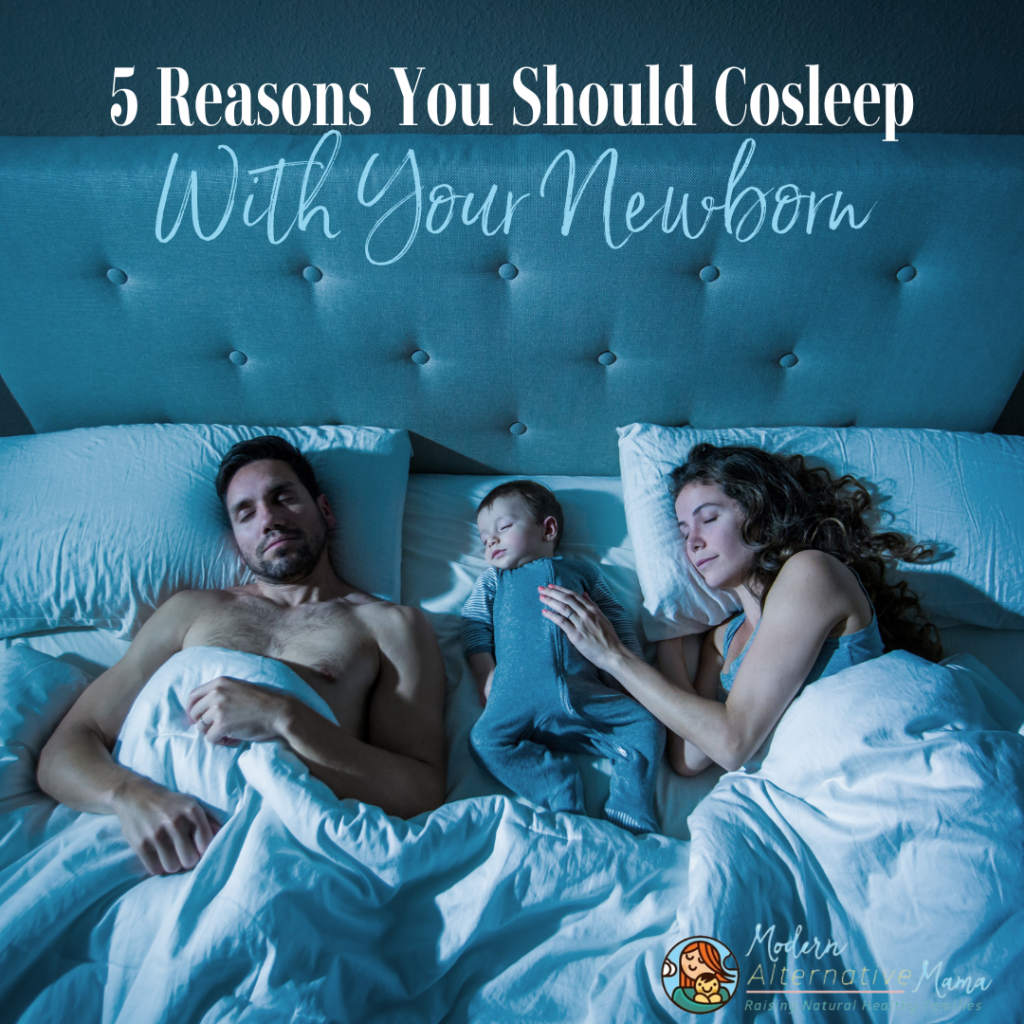 5 Reasons You Should Cosleep With Your Newborn

I never planned on bed sharing with my son. I heard all the warnings and quite frankly they scared me. Bed sharing is only portrayed as dangerous, and some see it as interfering with a baby learning to fall asleep on their own. It wasn’t until a couple weeks after I returned to work, right around the 4-month sleep regression, that I just couldn’t take the night time struggle anymore. I would spend at least an hour and half each night trying to ease my baby to sleep only to put him down in his crib and he would scream. Once he did fall asleep, he was up an hour later and the cycle continued. One night I just brought him to bed with me. He nursed, smiled, and rolled over and went to sleep. No struggle at all. He slept uninterrupted for hours until he was hungry and due to eat again.

What was more shocking was how I felt. It just felt right. I did not realize how strong my biological need was to be close to him. I no longer tossed and turned looking at the baby monitor when a whimper or grimace was made. He slept better, and I slept better. It wasn’t until I started talking to other moms about my taboo practice of bed sharing, that I realized it wasn’t so taboo after all.

Even if bed sharing may not be the right fit for your family, cosleeping has been shown to have numerous benefits for you and your newborn. While bed sharing by definition is sharing the same sleeping surface with your baby, co-sleeping is where your baby sleeps on a different sleeping surface but within the same room. Preferably within sensory range of the caregiver such as in a bassinet, cosleeper, or crib.

Here are five benefits of cosleeping.

Did you know that newborns can have 15-20 second apneic episodes while sleeping? If your baby is within close proximity, the carbon dioxide which is exhaled from you stimulates your baby’s breathing while cosleeping. So having your baby close by keeps baby from having extended periods of not breathing! A wonderful reason as to why you should cosleep with your newborn.

If your baby is within close proximity, you can soothe them easier and quicker. You get to learn your baby’s hunger cues sooner and can hopefully feed baby before fully waking, and thus have them fall asleep faster after eating. Your baby will also begin to relax when they realize that a caregiver is close by to answer their needs. Separation can lead to undue stress on a baby. The presence of another person in the room significantly improves baby’s heart rate and blood pressure.

When your baby is sleeping close to you, you are able to answer his or her needs more quickly.  You get to enjoy the special and tender moments of your baby sleeping nearby. And when baby wakes, you are the first person the baby sees and this becomes your first positive experience of the day. Sleeping close to infants enhances the ability for infants to socially and psychologically “attach” which contributes to a healthy emotional development in baby.

Cosleeping was the best thing for my breastfeeding relationship with my son. I had him in a bassinet beside my bed the first three months before attempting to transition him to a crib in another room (before eventually ending up in my bed). The ease of just picking him up and nursing when he was hungry without physically getting up and going into another room was a game-changer.

Also, studies by Dr. Helen Ball have shown that co-sleeping helps the breastfeeding relationship. Infants who co-sleep tend to feed or at least suckle for twice the amount of time as non-cosleeping infants. Nipple stimulation is necessary for the production of prolactin, which is the hormone that allows for milk secretion. Therefore, if there is reduced suckling this can lead to a decreased milk production and subsequent supply issues for mom.

In our society, a baby being able to self-soothe is seen by some as a sign of independence or autonomy which will theoretically lead to a lifelong sense of self-confidence. But the idea that a baby becoming too dependent based on the notion that cosleeping will spoil your baby and create bad habits is silly. All children will inevitably learn to put themselves to sleep. I don’t foresee having to go to college with my son and lay next to him to help him fall asleep at night.

A child being more independent than his peers is likely based off a multitude of factors, and not solely dependent on a baby’s sleeping arrangements. But interestingly enough, one of the first systematic studies of independence from Keller and Goldberg (2004) found an interesting link to independence and to the sleep environment of a child. “They found that according to their mothers a toddler’s ability to be alone and to solve problems while alone was based on their routine sleeping arrangements from birth. Routine solitary sleepers (not bed sharing toddlers) were the toddlers less able to be alone and less able to solve problems presented to them, while alone.” Which is the opposite of what everyone assumes. Some food for thought for all the naysayers that say you’re creating a clingy “Velcro” baby. Having an inter-dependent baby who has all his basic needs which is merely to be close to his parents is important for a healthy development, and will not create a child who is spoiled or has bad habits!

Mother and infant cosleeping is not some new trend. It is one of the oldest and most successful sleeping arrangements in evolutionary terms. Having your baby sleep away from you is the new trend! Cosleeping does not mean your infant has to share the same bed as you, a simple bassinet by the bed will do.

The one thing I learned after reading almost every baby sleep book under the sun, wondering why my baby would not sleep through the night in his crib like all the other babies, is that only the parents know what works best for their child. Not someone who has found the magic formula for a peaceful nights sleep. Trusting your own mommy instinct and figuring out what works best for you and your family will help everyone sleep a little better.

Do you cosleep with your baby?