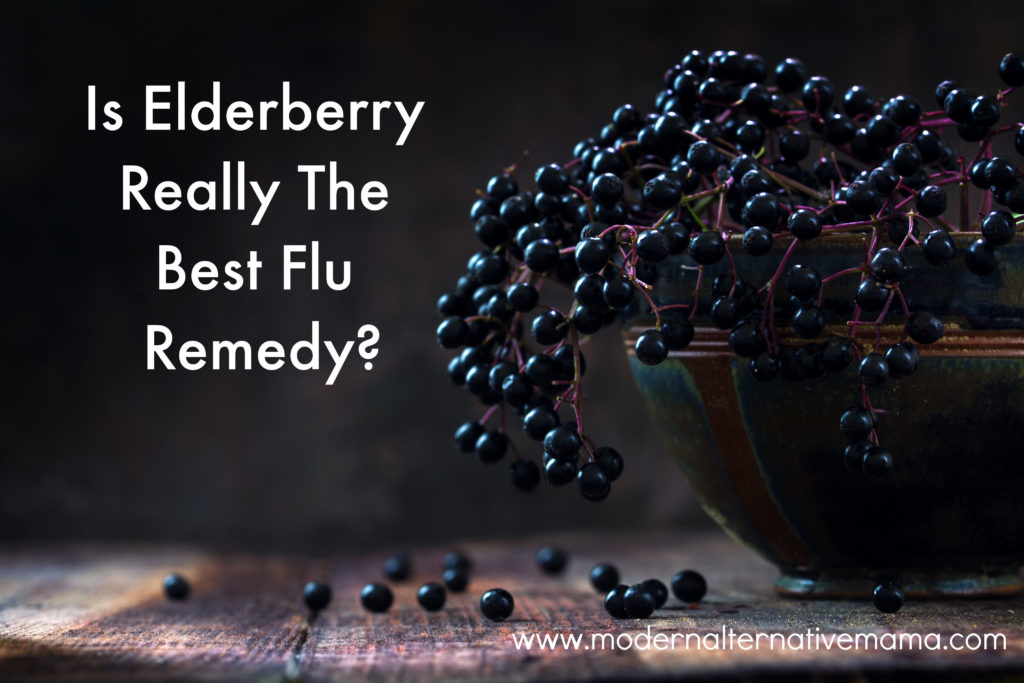 Right now, there is a lot of hype about how bad the flu season is — as there is every year (they do this on purpose, by the way, even when they know the season is average, just to push flu shots). But let’s suppose that this is a really bad flu season, like everyone’s saying.  There are two general camps right now:

If you’ve been around for any length of time, then you know I don’t think the flu shot is a good idea.  Elderberry has been hailed as a completely safe, natural, effective alternative remedy.  But…is it?

Some natural remedies can be unsafe for certain people.  Alfalfa, for example, because it is high in vitamin K, can cause problems in people who have blood clotting disorders and even increase the likelihood of stroke or autoimmune conditions!  It must be used with caution in vulnerable populations, despite that it is beneficial to many.  (Yes, it’s in my herbal multivitamin…and for the average woman or especially pregnant women who are at risk of hemorrhage, it is a good idea.  For anyone who has lupus, autoimmune, or blood clots, it is not.)

Elderberry has been hailed as safe because, well, it’s a food.  We eat elderberry in pies!  Surely it can’t be dangerous if it is consumed this way?

However, I’ve run across new evidence that elderberry’s effects are truly potent…and may not necessarily beneficial to all people, in all cases.

**2019: Even more new evidence has come out, and my understanding of elderberry has shifted, so if you’ve read this before, keep reading to see what else I’ve learned!**

(You can buy a DIY elderberry syrup kit here.) How Elderberry Works During Flu

As it turns out, from my early research, elderberry is very potent.  But, it’s doesn’t work along the same line as Western principles.  While, when I first wrote this post (in 2013), I thought that elderberry’s potent effects were enough to warn certain people away from it, I now have a better understanding of its total effects on the body.

First, let’s look at what happens when it’s used during illness.

Elderberry does have a strong effect on flu:

Sambucol was shown to be effective in vitro against 10 strains of influenza virus. In a double-blind, placebo-controlled, randomized study, Sambucol reduced the duration of flu symptoms to 3-4 days.

Other studies confirm this:

A significant improvement of the symptoms, including fever, was seen in 93.3% of the cases in the SAM-treated group within 2 days, whereas in the control group 91.7% of the patients showed an improvement within 6 days (p < 0.001). A complete cure was achieved within 2 to 3 days in nearly 90% of the SAM-treated group and within at least 6 days in the placebo group (p < 0.001).

This study also shows that elderberry is effective in preventing viral infections like flu.

This study better explains how it works:

We conclude from this study that, in addition to its antiviral properties, Sambucol Elderberry Extract and its formulations activate the healthy immune system by increasing inflammatory cytokine production.

Another study shows the same thing:

The Sambucol preparations increased the production of five cytokines (1.3-6.2 fold) compared to the control.

Previously, I misunderstood elderberry’s actions, and thought that elderberry would continue to boost cytokine production any time it was taken — even if the person wasn’t sick.  But newer research shows that isn’t actually true, which mitigates a lot of the concerns surrounding it.

High cytokine product can lead to a so-called “cytokine storm,” where the body massively overproduces these pro-inflammatory cytokines and the body essentially attacks and kills itself.  That’s usually how young, healthy people die of the flu.  One reason is that both ibuprofen and acetaminophen have been known to lead to a “rebound” inflammation effect after they are taken (source) — and many people use these to treat the flu.

Basically, trying to “fight” the body doesn’t work out well for anyone (at a minimum, can prolong symptoms).  But supporting it with elderberry actually works extremely well, and is much safer.

(You can buy a DIY elderberry syrup kit here.) How Elderberry Behaves When You’re Not Sick

First, we need to understand an important principle.  Herbs, in general, do not work at all like Western medicine.

In Western medicine, drugs are a single chemical that have just one single action.  They always do that one action, whether or not your body needs it.  And, they’re usually designed to interrupt your body’s function to try to “correct” a problem (which is why they cause so many side effects).

But herbs are different. They don’t just have one action, because they are a combination of many different chemicals.  These chemicals work with your body, to support it, and can actually work in opposing ways — depending on what your body needs at that time.  It’s why they usually don’t have side effects, and are much safer!

Elderberry contains anthocyanins, quercetin, citric acid, tannins, and lots more!  Each of these has its own actions, which is why elderberry can do so many different things in the body.

This study shows that elderberries and elder flowers regulate the immune system.

This study shows that elderberries and astragalus root upregulate the immune system when you’re sick, but otherwise do not.

This study shows that the flavanoids in elderberry inhibit an excessive immune response.

But that’s not all.  Elderberries also help to protect liver and heart health (source), and even have some anti-cancer properties (source)!

Elderberry has also been shown to have anti-bacterial properties, including against a couple of strains of strep bacteria (including Streptococcus pyogenes, which is responsible for many strep throat infections).  That study also notes that elderberry may be useful in preventing complications of viral illnesses, like bacterial pneumonia, and because its protection is “non-specific,” infections would not become resistant to it as they do to antibiotics.

(This this elderberry tincture if you’re not a DIY-type!  It’s my formula, and we use it often.)

Mixing lemon juice and elderberry appears to increase the shelf life as well as preserve vitamin C, another important nutrient in fighting off respiratory infections.

The bottom line of all of this?  Elderberry has many amazing properties and appears safe in all studied populations.  I would recommend, personally:

This is a bit of reversal of what I thought 6 years ago, but after reading more studies and having more experience with elderberry, I think differently about it now.  Previously, I recommended only using elderberry during symptoms and for a short time.  Now, I have seen so many people find it beneficial for daily use and avoid illness that I can’t help but update my recommendations.

Based on all of this research, I will post a new elderberry syrup recipe next week that incorporates the best combination of natural remedies.  This syrup may also be used for certain bacterial infections and I recommend using cod liver oil in moderate doses along with it.

If you are not much of a DIY person, or are tired of making syrup only to waste half of it, then Elderberry Elixir may be a good fit for you.  This is a tincture I formulated.  It’s shelf-stable, very concentrated, and more cost-effective than syrups.  It’s also free of allergens, preservatives, colors, flavors, and added sugars. Ginger may be helpful with respiratory infections, and has been shown to have anti-inflammatory effects, including inhibiting the TNF-alpha cytokine. (Ginger is found in our Elderberry Elixir for this reason.)  Fresh ginger (but not dried) was also shown to be beneficial in preventing/helping RSV.

Very early research shows that pomegranate juice may be effective against flu, stomach flu (norovirus), and other infections.  Pomegranate, actually, has also been shown to possibly prevent and even cure cancer of the breast, prostate, and colon.

Cod liver oil is especially beneficial.  It contains vitamins A and D, which have benefits in immune function.  It may also protect against or slow the development of heart disease.  It has anti-inflammatory properties as well.  It may decrease the risk of respiratory illness (more evidence).  It also affects the fat-soluble vitamin content of breastmilk.  It may play a protective role against cancer death, and help rheumatoid arthritis.  It may reduce the risk of type I diabetes (other vitamin D supplements didn’t show the same effect), also reduces risk when pregnant women take it (other vitamin D and multivitamin supplements didn’t show the same effect).  It’s beneficial for eye health and may decrease the risk of glaucoma and associated blindness.

Elderberry has a long, long history of use as both food and “medicine,” and is beneficial to health in many ways, above and beyond flu treatment.  It’s a worthwhile herb to include in your diet regularly.  Including other herbs, like ginger or mullein, is a good idea, too!

Yes, I had way too much fun doing all that research.  It took many years of experience and many hours of reading to do it all, but I feel like I’ve learned so much (you can read all the studies I did by clicking the links throughout the text).  I hope to bring you all more posts in the next few weeks based on all I have learned from writing this one!

(Want to make elderberry syrup?  Try this DIY kit!  Or, if you’re not a DIY person, try Elderberry Elixir.)

Do you use elderberry?  Why or why not?