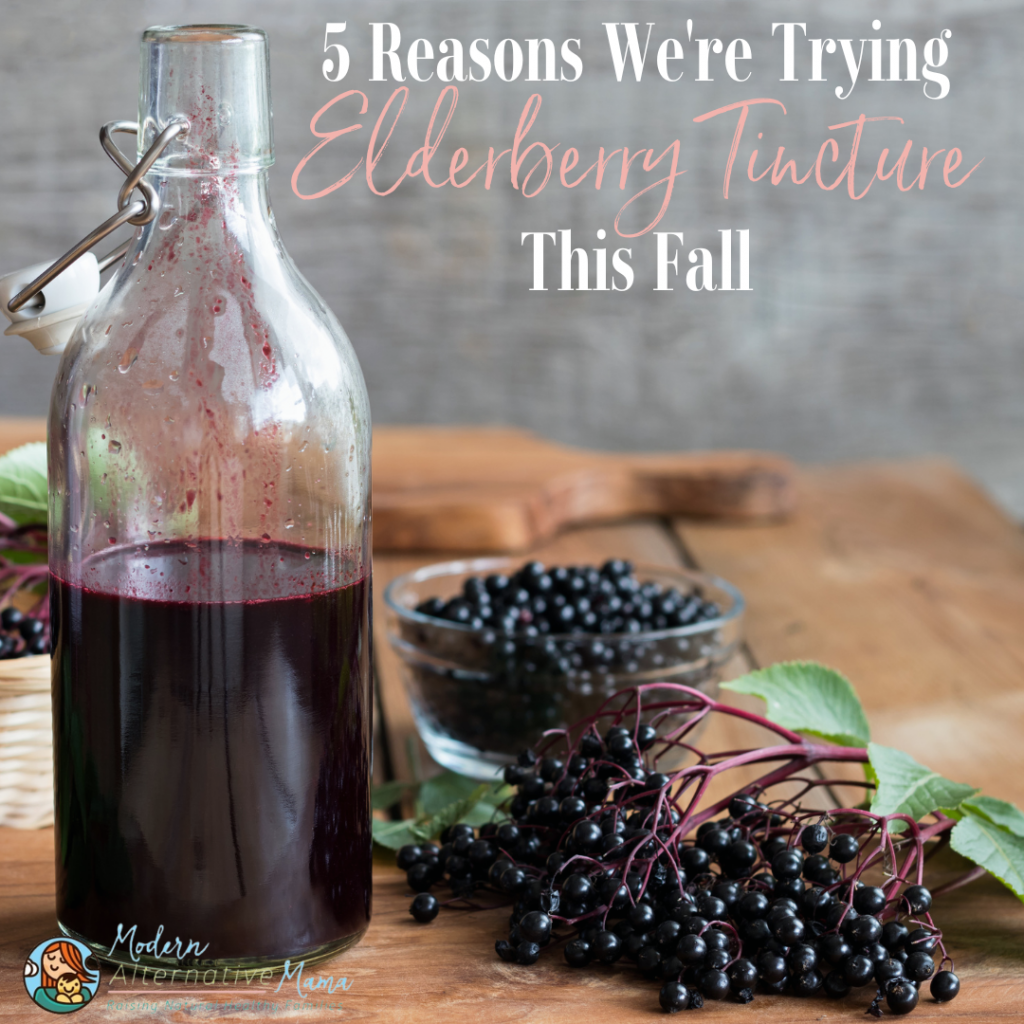 We’ve been a little obsessed with elderberry syrup for…well, a long time.  The first time I ever posted on it was probably sometime back in 2011, although I shared a few posts about elderberry syrup between 2009 and 2013…I can’t even find them all now!

It was kind of a fun time.  My “heyday,” if you will, in discovering what natural living and herbal remedies were really all about.  Elderberry obviously was a big part of that, because everyone who’s anyone in the natural world uses them!

These days, I’d have to say, are a little different.  I’ve made and tweaked all kinds of things using elderberries — from syrups to tinctures to pies — for several years.  It’s not new to me anymore.  In fact, I’ve done so much self-study and have had so much experience in using herbs that I’d claim the title of “herbalist” now.

That’s why, if you’re as eager to get to fall as I am, and ready to break out the elderberry syrup, hold on!  I want to tell you why we’re changing it up this year.

It’s not that I don’t love elderberry syrup.  Obviously, I do.  But let’s just say…we’re busy.  (You too?)  I mean, I have 5-soon-to-be-6 kids, we’re homeschooling (and have found ourselves leading yet another coop…), and we run our own full-time business.  So…you know.

I need to simplify things for my family right now.  I need natural remedies that work, and that are easy.  I do not have time to mix a bunch of versions of different things and keep making them as needed.  I won’t even remember, probably.

By the way, if you’re newer to the whole using-elderberries idea, you might want to check out Ultimate Elderberry Syrup Recipe.

But! Syrup is not your only option.  And it’s not what we’re going for this year.  Instead, we are going for an elderberry tincture…for a whole lot of reasons.

What even is a tincture?

Well, I’m glad you asked.  A tincture is a combination of different herbs that are steeped in either vegetable glycerin or alcohol and water.  All of the herb’s wonderful properties are concentrated in the liquid.  The mixture is strained, the herbs are discarded, and the liquid is kept and used.  I love tinctures!

Until recently, I hadn’t used elderberry in this form, but I have to say — I’m a fan.  And this is why.

Some people like elderberry syrup…and some don’t.  With the syrup, most people are taking anywhere from 1/2 tsp. to 1 tbsp. per day (and sometimes every few hours, if they have a cold starting).  That’s 2 – 15 ml.

With the tincture, you only need very tiny doses.  We’re talking 0.1 – 1 ml.  If you’re not a fan, it’s easy to hide that tiny amount in juice or really…anything.  No big deal.

This is a pretty big deal!  Elderberry syrup has to be refrigerated, and usually only lasts about a month.  That’s okay if you make a small batch and take it daily, but you’re still making it at least monthly.  Plus, lots of people find they don’t finish a batch before it goes bad, and end up having to throw some out.

Not so with a tincture!  A glycerin version will last at least 6 months, and an alcohol version, at least a year (and likely, a lot longer).  That means you don’t have to keep making it…and nothing gets wasted.  That’s super awesome.  (Plus, if you accidentally leave the syrup out, you have to throw it away.  If you leave this out?  Who cares!)

Those first two points?  You use less and you waste less…that makes the whole thing more cost-effective.  Who doesn’t want to save money?

Because you don’t need much and it doesn’t need refrigerated, it travels easily.  All you need is a small bottle.  It can even go on planes.  This is a huge benefit when it comes to the holidays!  Stress + sugar usually means you could use a boost. 🙂

Have you ever read the label on a store-bought elderberry syrup?  They’re full of refined sugar.  I have never understood how loading up on the sugar when you’re trying to improve your health is a good thing!  I mean…is there even a net benefit at that point?

Homemade syrups are obviously better, because they usually use raw honey and have a lower total sugar content.  I’m not knocking raw honey…I think it’s awesome.

Still, some people can’t do sugar for some reason, or prefer not to.  In that case, a tincture is perfect, because there is no sugar added!  (And even the glycerin or alcohol isn’t going to matter because it’s such a tiny dose.)

But Does It Work?

We had occasion to test out our new elderberry tincture this summer when some of us came down with a cold.

One kid had a cold for a week or so…and it wasn’t really bothering him, until one night he woke up saying his ear hurt.  Among other things, I gave him some elderberry tincture, and by the next day, he was finally getting better.

Another kid got it right away, and his cold was a shorter duration than the kids I didn’t give it to.

I took it myself…and found I felt significantly better the day after!  I continued to take it for a few more days until my cold was gone.  (Being pregnant, congestion was driving me insane and made me feel pregnancy-nauseous and I could not deal with it.)

It worked at least as well as the syrup did…and it was a heck of a lot easier!  I’m pretty stoked.

Where to Get Elderberry Tincture?

You can make it yourself.  It’s not that hard.  Grab elderberries and other stuff (cinnamon and cloves are common — whole, not powdered) and put it in a jar, about 1/4 full.  Then fill up with 100 proof vodka, or half vegetable glycerin and half filtered water.  It’s pretty forgiving.

There are lots of recipes out there if you’re looking for exact proportions, too.  But really tinctures are quite simple.  They sit for 6 weeks, then get strained.  Keep in a dark brown bottle (preferably) in a cabinet.

If you’re not interested in DIY at this time, or don’t want to buy elderberries or other herbs in bulk (because that can initially be kind of pricey), I do have a solution. 🙂

Are you thinking about trying an elderberry tincture this fall?