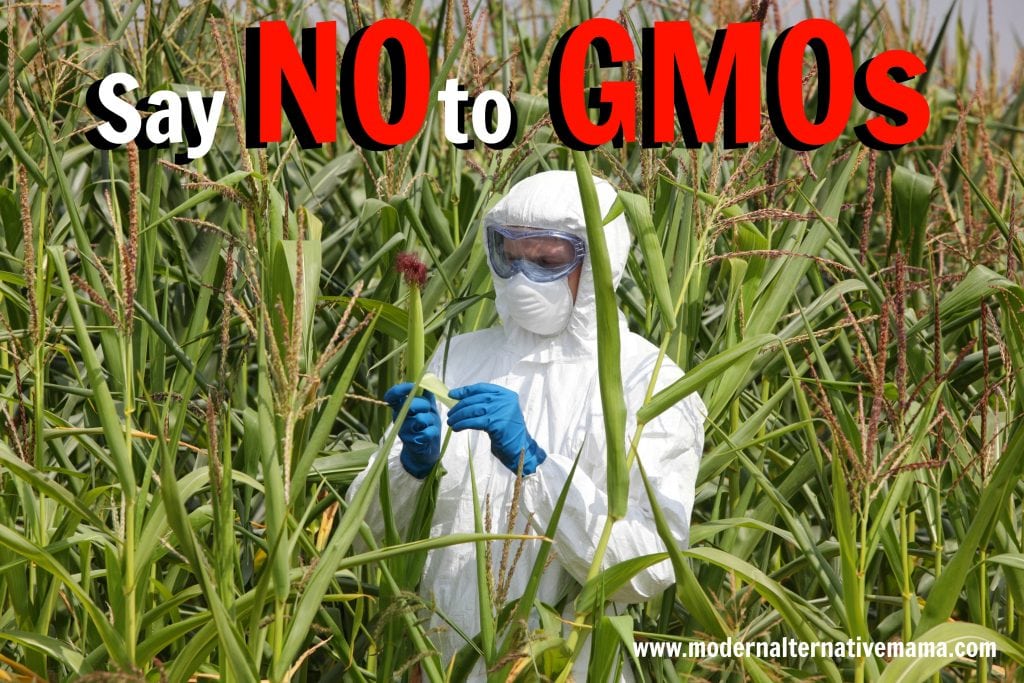 Say NO to GMOs!

GMOs. What are they? Are they good for you? Bad for you? Does anyone really know? Here’s what we found out and what you can do if you want to avoid them.

Genetically Modified Organisms….Say WHAT?!  Whenever I mention or post an article about GMOs, it’s inevitable that I’ll have some friends who will have no idea what I’m talking about.

And I don’t blame them for not knowing. I was just like them three years ago. Whereas I thought my husband and I ate a relatively healthy diet, I had no idea we were consuming food that had been genetically modified every day.

I discovered GMOs soon after my first child was born. A friend had started researching and eliminating certain foods—including GMOs—from her son’s diet because he was having severe health issues. She read ingredient labels meticulously.

“You can’t trust a package label just because it says ‘all-natural,’” she told me.

So I started doing some research myself. And what I found was alarming.

So what are GMOs anyway?

According to the Institute for Responsible Technology (link http://responsibletechnology.org/gmo-basics/faqs), a GMO is created when genes from one species are inserted into another species to bring about a new species with desired traits. The result is food that looks the same (i.e. GMO corn looks like non-GMO corn) and perhaps even tastes the same, but, in reality, is very different.

An example that the Institute of Responsible Technology (IRT) named was the insertion of arctic fish genes into tomatoes and strawberries to make them more tolerant to frost. Frost-free foods are cheaper to grow…and cheaper to buy, but are they good for us when they’ve been engineered through a species that is nothing like them?

Really, no one knows the exact effects that GMO foods have on the human body because there haven’t been any long-term studies on human consumption of them versus human consumption of purely organic foods. However, IRT claims: “Various feeding studies in animals have resulted in potentially pre-cancerous cell growth, damaged immune systems, smaller brains, livers, and testicles, partial atrophy or increased density of the liver, odd shaped cell nuclei and other unexplained anomalies, false pregnancies and higher death rates.”

So, I can just easily avoid GMO food, right?

Not so much. Unless you eat a 100% unprocessed, organic diet with food grown by farmers you personally know, you probably consume GMOs every day—or at least every week.

That’s right. GMO crops are in EVERYTHING, and although laws require GMO labeling in Europe, there are no such regulations in the United States.

So what can we do?

It’s not impossible to avoid GMOs, and the best defense is to know what are the main GMO crops. These are the foods I avoid or *try* (on my family’s tight budget!) to buy organic (and I warn you: you will find these in almost every packaged, processed item!):

If you simply cannot avoid some of these ingredients for whatever reason, try to at least protect the most vulnerable in your family from GMOs. Children are the most susceptible to GMOs.

One of the most helpful resources I’ve found available on GMOs is the non-GMO shopping guide (link: http://www.nongmoshoppingguide.com/). You can download the guide to your computer or even purchase a pocket guide or an app for your iPhone.

Erin Odom is a stay-at-home wife and mom of two girls and a freelance writer for the 7-paper Carolina Weekly newspaper group in Charlotte, North Carolina. She writes mostly human interest and faith stories, as well as a bi-monthly mom column for the Mooresville Weekly. Erin is also a contributing writer for Lake Norman Mommies. She loves Jesus, traveling, mission work, speaking Spanish and researching how to live a healthier lifestyle. She has just started blogging at www.thehumbledhomemaker.blogspot.com.