You’re About To Be a CodeTalker: The New GMO Labeling Law |
AD 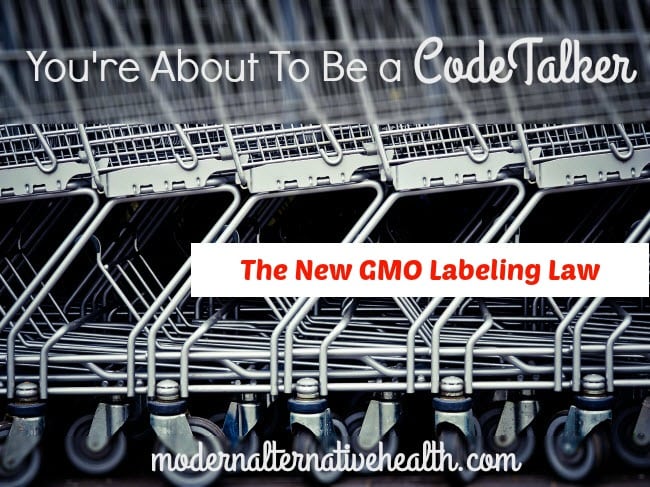 You’re About To Be a CodeTalker: The New GMO Labeling Law

Consumers have been increasingly demanding the labeling of any foods with genetically modified ingredients in recent years, as nations across the world ban or clearly label such foods. Over 38 countries in the world have outright banned the sale of GMO foods, and numerous others have voted to clearly label all GMO-containing products. In July, Vermont’s labeling law, which would require clear labeling on the package, went into effect. Many legislators have felt the burn from this minor victory, and rushed to implement a national law to overtake the state law.

You’re About To Be a CodeTalker: The New GMO Labeling Law

Basically, the attitude is “they’re going to pass something, we might as well make it something we can live with.” Large corporations complain that packaging changes are too expensive (which they do all the time and in fact have GMO lingo on their European products), or that it would suggest to the consumer that the product is not as healthy, which of course could never be true {sarcasm}.

It’s up to the producer which type of label they use. The law allows a scanned code (like QR code) which would lead the user to food information including if there are any GMO’s. For smaller companies, a phone number or web site would suffice. There may be some sort of symbol for produce, as their labels are rather small and would not accommodate a code.

The USDA was given two years to determine what exactly the Rules of this law will be. If you have ever followed the legislative process, you know that agencies will push the boundaries of the law in administrative rules. These administrative rules will govern how the labels will be used.

Some groups have concerns that highly processed products may not fall under the law because the end product has negligible or no detectable GMO’s even though they were used in processing. Further questions surround and bio-engineered products, like gene-altered salmon, which may also fall out of the labeling category in the law.

The question of discrimination has also been raised. What if you don’t have a smart phone? Or even a computer? (Or, why the heck can’t you just be transparent!?) Rev. Jesse Jackson actually wrote a letter to Obama asking how the millions of Americans without a smartphone, many of whom are low income, will access this information. That’s a very good question. I also question how we are supposed to have the time to look up every food’s code, website, or call their listed number. It’s clear that transparency or even ease is not the goal here. Printing the five words “This Product Contains GMO Ingredients” seems to me to be less printing than an entirely new QR code.

I don’t know about you, but I don’t have time to check out every product’s website at the grocery store. It’s a blessing to get out of there with all children intact and tearless. Whether you believe the limited, industry-funded stories, I mean studies, that say that GMO’s are totally safe, or the long term studies which clearly show a decline in health and increase in cancerous tumor rates in mice, you should be able to know clearly what’s in your food. Period.

GMO’s are not the only issue with genetically modified foods. These foods are also sprayed heavily, multiple times a growing season, with hazardous pesticides. These pesticides, including particles of heavy metals, are still found on your food when you pick it up at the supermarket. (You can avoid pesticides by buying organic).

If they are so proud of the stuff, why not label it?

What Can I Do?

Laws are going to keep changing, and it may be some time before the laws are in the consumer’s favor. Fortunately, you can arm yourself with resources and knowledge to ensure that your family does not consume the cancer-causing foods.

Educate yourself. Laws are always going to change, different products will be labeled differently, and your grocery store may move (or you may move) or make changes. Know how to pick out the healthy foods without having to scan a label.

Buy organic. The USDA organic seal does not allow any use of GMO’s, so you know there are no modified ingredients in that product.

Seek out nonGMO project Verified label. This label is expensive to achieve, especially for small companies, but some are still seeking this status.

Check the labels. For produce, anything commercially grown has a 4-digit PLU, while organic has a 5-digit PLU which begins with “8.” Papaya, sugar beets, and squash are the most common GMO produce. In processed foods, anything with corn, soy, wheat or corn and soy oils is likely from genetically modified foods.

Know your farmer. Many local farmers are selling their organic produce. If you can’t find one, asking around your local crunchy mama’s social media group, or check out the farmer’s markets in your area. Farmers may be interested in letting you buy from bulk straight from the farm (or even barter). When you know your farmer, you can trust what you are getting.

Grow your own. Even if you live in an urban area, you can grow indoors in pots or a garden bed with artificial lighting, or turn your yard into a garden. Herbs can be grown in small pots throughout your home. Every little bit counts!

Speak up. Sign a petition to tell the white house that this labeling law is not enough for Americans to know what’s in their food

It’s tough to say what exactly our food labels will look like before the USDA determines their rules. After the long battle between corporate greed and frustrated Americans the last few years, it’s clear to see who will be the winner. The labels will likely just get sneakier and sneakier, and we just need to be more and more prepared, knowledgeable and building up our better food supply alternatives.

What do you think about the new GMO labeling law? How do you avoid GMOs?