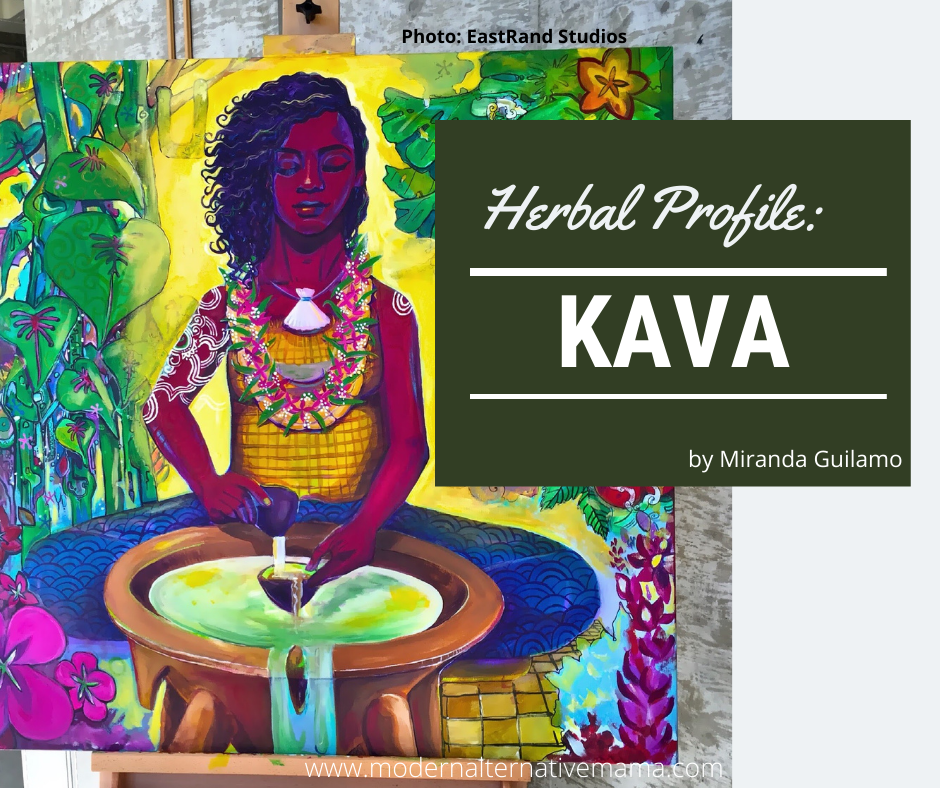 Did you know Kava root has shown to be as effective as some antidepressant and antianxiety medications?

We all have periods in life that produce more stress and anxiety than we would like. If you were on the island of Maewo, your family might just offer you a Kava drink. Keep reading to learn more about this interesting root with not only centuries of tradition, but also plenty of clinical studies.

Kava-Kava, also known as Kava or Piper methysticum, is a tropical shrub from the pepper family originating from the South Sea Islands. It can grow up to 33 feet tall and is grown in Australia and Hawaii as well. Since as far back as 1616, documentation has been found about the Kava ceremonial drink used by Pacific Islanders; the root is chewed or ground up, then mixed with water or coconut water and then filtered into a separate bowl. This turns into a muddy light brown drink.

Alise Eastgate is a collaborative visual artist who has painted at events throughout the Fiji Islands. Her husband and artistic partner, Jack is from Fiji. Alise told me, “I learned about kava from Jack who grew up mixing and drinking it in Fiji. There, it’s common to have a mix after work and at any social gatherings, and music is often a part of it with people playing guitars and ukuleles and singing around the kava bowl. Now we have a mix at home on the weekends and often play some music too.” There are many clinical trials on Kava, especially with respect to anxiety. Kavalactones are the main ingredient found in the root and studies show they boost the brain’s GABA neurotransmitters, which calm the brain.

The first long-term study was done in 1997. Kava significantly diminished the patients’ perceived anxiety compared to a placebo. Also, the study showed no withdrawal side effects or dependency.

In an 8-week controlled trial at Ludwig-Maximilians University in Germany, Kava was as effective as the antianxiety drug Buspirone and antidepressant drug Opipramol in treating patients suffering from Generalized Anxiety Disorder.

The main benefits shown in different clinical studies are:

I asked Alise Eastgate if there are any medicinal benefits that Kava is known for in Fiji. She said, “Yes, it’s well known as a stress reliever and muscle relaxant.” Concern has been raised over the safety of Kava. There were a few rare cases where it was connected to liver toxicity, although the true cause is still unknown. Several countries have even banned Kava. In 2014, Germany reversed the ban because the cause of the toxicity was unclear. The court declared that the German Federal Institute of Drugs and Medical Devices “had not conclusively proven the causal relationship between kava preparations and the alleged liver damage.” Many speculate that the liver toxicity may have been due to prolonged use, incorrect dosage, or contamination of the harvest.

Kava is not usually recommended for a use of more than two to three months. It has been shown to interact with several drugs, medications, and alcohol.

Do not use kava if…

As with all herbs and supplements, please talk with your doctor or an herbal professional about possible side effects and dosing. How to Source KAVA

You can buy it in various forms: capsules, tea, powder or liquid tincture. You will want to ensure the following:

If you are not a fan of the Kava taste, then the capsule form may be the most convenient. Most research suggests to not take it long-term.

There are “kava bars” in various parts of the country. You can try some fun recipes from Mountain Rose Herbs with Kava root powder. Lastly, you can follow Alise’s lead, she encourages “anyone curious to have a bilo (bowl)!”

What is your personal experience with Kava?

Miranda
The daughter of Cuban immigrants. Her Latinx roots drive her work ethic and passion for raising her children to be bilingual. So fortunate to have traveled and lived in more places than most. She opts for the route of education and enlightenment versus blissful ignorance.
AD