The Truth About Coconut Oil |
AD 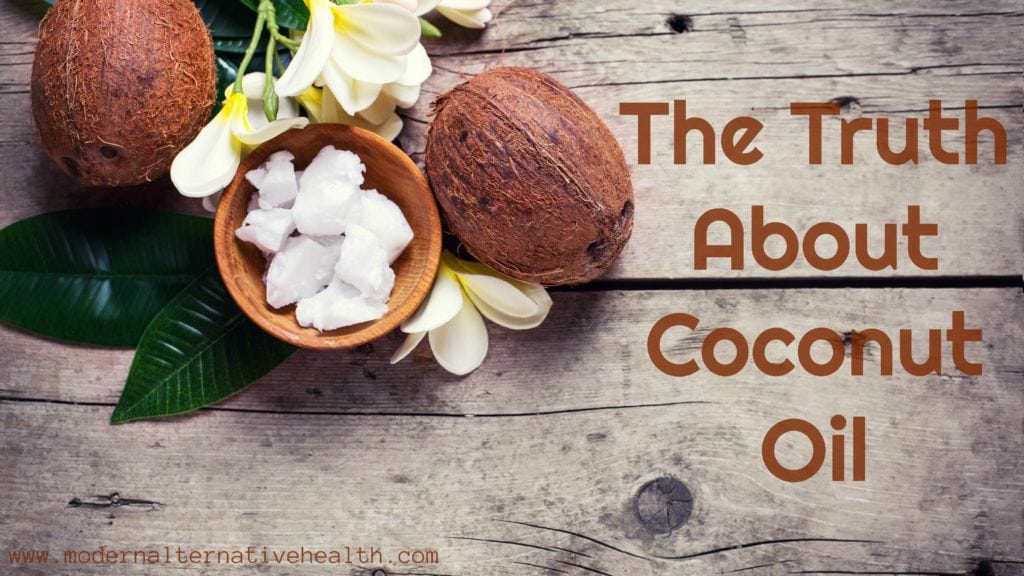 The Truth About Coconut Oil

The internet’s all in a tizzy over the latest mainstream media article on coconut oil — which claims it’s not, and never was, healthy.

All of the mainstream people are saying — “See, I told you so!” while all of the more alternative people are either outright denying it or saying “Wait…could it be true?”

The Truth About Coconut Oil

Coconut oil has had a lot of attention over the last several years, with both “regular” people and experts touting it as a healthy choice…or even a miracle food.

There’s a lot of conflicting evidence on coconut oil out there.  And, bottom line…it seems to vary by how you look at the data.  Some people are looking at data “holistically” (mostly population-level data of traditional diets), and some are looking at it in an “isolated” way (lab studies that directly compare coconut oil vs. another oil, with no other dietary differences).

In general, what they find is this:

The “holistic” crowd can point to many large populations of people who consume a lot of coconut products as part of their traditional diet, and who have very low rates of heart disease and other modern issues.  They use this as evidence that the coconut itself is protective against these diseases.

The “isolated” crowd can point to a handful of studies (at least 21, in this review) where coconut oil, when directly compared to another oil, appeared to increase the risk of heart disease.  They use this as evidence that coconut oil is dangerous and should not be consumed.

So who is right?

In some ways, both.

The truth is, coconut oil is not a miracle food.  If you are eating an unhealthy diet, adding in a spoonful of coconut oil everyday won’t fix things.  In fact, it could possibly make things worse, if you believe the isolated studies.

But, coconut oil, as part of a healthy diet of unprocessed foods, is healthy and will not cause issues.

Coconut oil does not need to be raised to the status of some holy, beyond-reproach food.  It has its uses, and in the context of a healthy diet, is perfectly safe to consume.

What About Overall Diet?

There were vastly different diet types in the population-level studies vs. the isolated studies, which likely had way more to do with the outcome than which oil type they were using.

In the population-level studies, people were generally eating a lot of starchy veggies (along the lines of sweet potatoes) and a lot of fish, in addition to large amounts of coconut products.  Diets varied a bit, but these were the major components.  Diets were generally quite limited in scope.  It’s also important to note that these groups of people ate whole coconut products, and not generally coconut oil in isolation.  Coconuts come with milk, water, cream, and flesh — not just oil.

In the isolated studies, people were eating a more Western-type diet, higher in processed foods, especially refined grains and sugar.  Coconut oil could not overcome these negative impacts.

What can we take from this?

Diets high in whole coconut products, fresh veggies, and seafood are generally healthy.  Diets that are high in refined grains and sugar, are not.

This does mean that the way that we use coconut oil in the Western world sometimes is potentially unsafe.  Some people swap it for butter in baked goods (which research says is slightly better).  But, choosing to use refined coconut oil, white flour, and sugar to bake and hoping to reap the benefits of coconut oil is just not going to happen.  Not really — at least not in terms of heart disease reduction.

Overall, this highlights how important our diet is as a whole, and that no single food is individually a miracle.  We also cannot expect to eat 90% junk good, and incorporate the latest “super food” and expect to see miraculous health changes.  What we eat most of the time is what matters.

Coconut oil is also not necessarily ideal for topical use, at least not in all situations.  It’s naturally antibacterial and anti-fungal, so it is excellent if you are dealing with cradle cap, cuts or scrapes, or certain types of rashes.  It also has a slight natural SPF, so some people use it as a natural sunscreen.

However, coconut oil is also a rather “dry” oil, not a moisturizing oil.  If you are looking for something moisturizing, apricot oil is going to be a better choice.  Coconut oil can be drying to skin and hair.

Does Coconut Oil Have Other Benefits?

So, coconut is a healthy food, in its whole form, and in the context of an otherwise healthy, unprocessed diet.  All of the isolated studies have focused on heart disease risk.  But what about other potential benefits of coconut oil?

There are actually a whole bunch of studies.  (Click the links below to see the studies.)

Obviously, yes, coconut oil has other health benefits.  And, other studies show that coconut oil is healthier (even in terms of heart disease and diabetes risk) than some polyunsaturated oils — the opposite of what this new “review” purported to find!

Coconut oil has clear health benefits, so avoiding consumption entirely because of a few silly news articles is ridiculous.  Just keep in mind it’s not a panacea; it’s one part of a healthy diet.

Views on Health are Important

The truth is, we will never find the “truth” about a single optimal diet for humans, because there isn’t one.  Every human has a different body chemistry, and what’s right for one person won’t work for another.

Modern science generally ignores this, and assumes that by studying large enough groups of people and isolating each ingredient, we can definitively answer whether or not that food is healthy.  But we can’t really do that because people vary so much, and because we don’t eat single foods in isolation.  Every food we eat counts towards making healthy or unhealthy choices, and it’s our diet as a whole that really matters.

The holistic and traditional view of things aims to look at our diet as a whole, acknowledging that you cannot isolate a single ingredient and see its effects on the body — because that’s just not a real-world scenario.  What we consume with that single food matters.  It can change how our bodies metabolize foods.

While Western medicine has its place, it is terrible with nutrition.  All of the Western advice on diet has been terrible, and continues to be terrible, as people who generally follow a Western diet have high rates of cancer, obesity, heart disease, diabetes, and other serious health issues.  In short, I wouldn’t consider Western advice on diet very strongly.  Well, probably not at all.

Make of all this what you will, but never listen to the media.  They tend to blow things out of proportion, and report preliminary or minor findings as major news.  Always look more closely instead of just believing what you read.

How do you feel about coconut oil?