Natural Living is Going to Kill You! |
AD 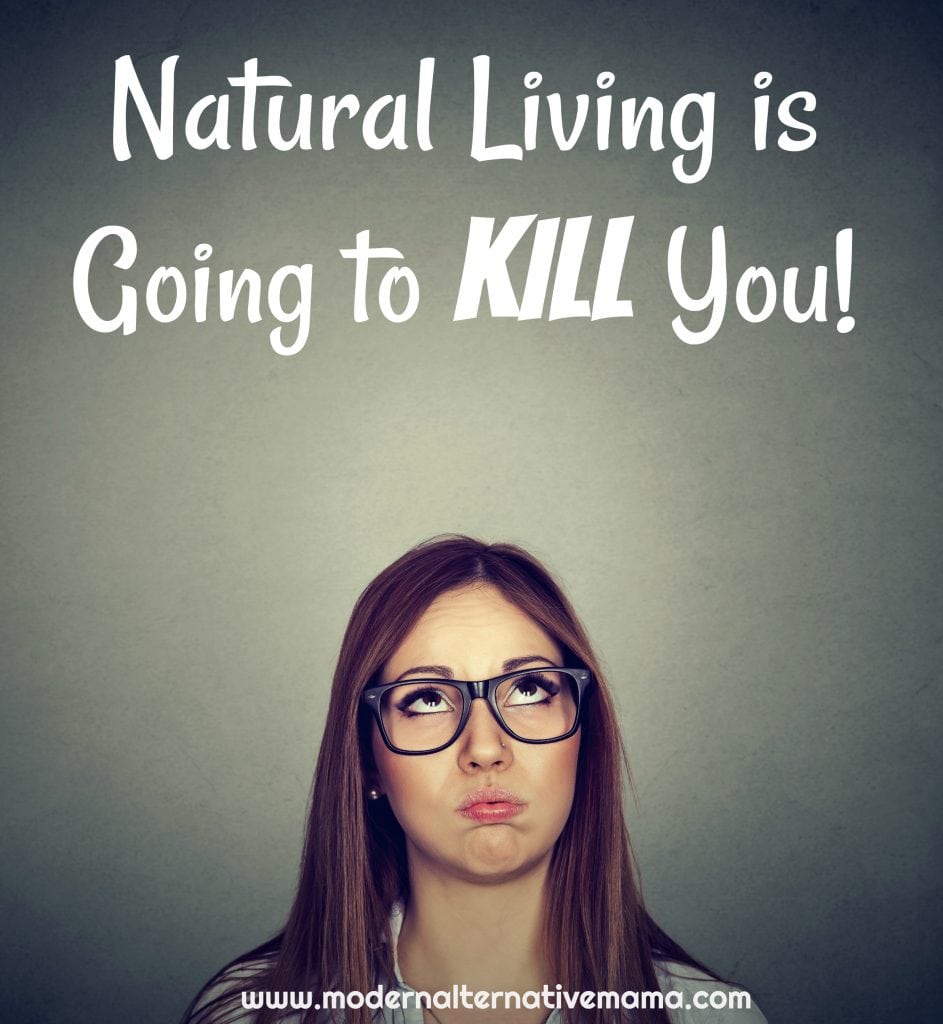 Natural Living is Going to Kill You!

…at least, if the media is to be believed.

There has been a rash of news articles lately, claiming that various aspects of natural living are dangerous or harmful to health.  Nearly everything has been implicated, it seems!

Coconut oil will kill you (nope).  Garlic is bad.  Home birth is dangerous.  Refusing the vitamin K shot is deadly (it isn’t).  It goes on and on….

Basically, the mainstream would have us believe that there’s no evidence that making more “natural” choices is safe, and plenty of evidence that it’s dangerous.  After all, we’re all just making these choices because it’s a fad, because we brainlessly follow equal-brainless celebrities, or because we want to be ‘hip’ or ‘different.’

It’s not because, you know, we actually think about what we do, look at the available evidence, and make a conscious choice.  Of course not.

It’s pretty sad when the mainstream has to go so far as to paint us all as irresponsible and uninformed — while typically providing no evidence of their own to support their positions!  They parade “doctors” (some of whom don’t practice and don’t know what they’re talking about) and pretty faces around to tell us what we should and shouldn’t believe, and just expect us to take their word for it.

Sorry, but that doesn’t fly with me, and it shouldn’t with you, either.  I expect facts when someone wants me to change my mind.  Not mindless “trust-me-I’m-a-doctor” drivel.

And that’s why I landed here.  Because you know what?  There actually is a lot of evidence in support of natural living! Natural Living is Going to Kill You!

…except, actually, it won’t.

The scientific evidence is, in many cases, overwhelmingly in favor of making more natural choices.  I’ve summarized some key issues below.

Let’s just remember, this is evidence that’s just in support of natural living.  It doesn’t even take into account all of the dangers of mainstream choices!  (You can read more about that here, and here.)

And you don’t have to take my word for it.  I’ve linked to all the studies so you can see for yourself!

A large meta-analysis found that overall, planned home birth was as safe for babies as planned hospital birth, and that the overall “experience” was better.  (Despite this evidence, OBs in the US still consider it “professional ethics” to warn women against home birth and take a very paternalistic view of the matter.)

A 2010 study theorizes higher contamination of a water birth vs. traditional birth, but the actual data shows no increase in infection rates in water-born infants.  It also notes significant benefits in pain reduction, use of forceps, and more.  A 2014 study came to the same conclusion.  So does a 2016 study.  And a 2007 study.  So, over the years…many studies have shown that water birth is safe!

There was also a small study showing that plastic-lined disposables were associated with a higher scrotal temperature in boys (which could affect sperm production/fertility later in life — current evidence doesn’t prove or disprove this fully).

A very old study showed that microbial growth wasn’t different between cloth and disposable diapers, even under optimal conditions.

A 2002 study recommends exclusive breastfeeding for at least 6 months, and notes these babies had a lower risk of gastrointestinal illnesses.  A 2009 study notes that while the risk of allergies may be slightly lower with an earlier introduction of solid food, when looking at the whole health picture, exclusive breastfeeding for 6 months is still the best recommendation.

Another study of notes that children who are exclusively breastfed for at least 6 weeks (which is not long!) had longer telomeres in the preschool years than their formula-fed counterparts.  Why does that matter?  Telomeres are a part of DNA replication, and as parts “break off” and do not replicate correctly, it causes aging — and eventually, death.

Yet another study shows modest IQ boosts to babies who are exclusively breastfed for at least 6 months.

Plus, one study shows that breastfeeding appears to positively influence gut health and immunological development.  (Another study on gut development while breastfeeding.)

The media recently claimed that breastfeeding past age 2 increases the risk of dental cavities.  While one study says it’s true, the authors note that there are NO studies that compare breast vs. bottle vs. neither past 12 months of age; no studies control for other aspects of diet; and no studies look at overall oral hygiene differences.  So basically, it’s a worthless study because there are too many variables not accounted for.

Where to even start here?

Of course, the mainstream claims that all vaccines are safe and effective, the end, and anyone who questions them is an anti-science nut job.  (It’s so great!  I love it when people stoop to mocking a position instead of calmly presenting evidence.  It honestly means they don’t have a real point.)

This is wrong, naturally.  There are mountains of evidence to suggest that, at the very least, we ought to be more cautious about vaccines than we are.  That’s not so weird, is it?  We’re injecting 6 – 8 vaccines at once into very tiny babies, some of which contain ingredients that are known neurotoxins.  Of course we should want to ask more questions, and be more careful.  As new scientific evidence comes out, we should be reviewing it to see if our current approach still makes sense, or if it needs revision.  This isn’t happening right now, and it’s time it did.

There’s a serious concern over unacceptably high level of human DNA contamination in the MMR vaccine, which has been potentially linked to ASD (study).

Quite a few of the allergies that we’ve seen skyrocketing over the last 20 years may be related to vaccines.  Allergenic foods, like peanut oil, egg protein, gelatin, and more are found as ingredients in some vaccines (article).

This is seriously just the tip of the iceberg…but I think it’s clear that more study and more caution is warranted here!  Only someone who didn’t care about children’s health could easily dismiss this without a second thought.

This is another one the media likes to pretend isn’t really a “thing.”  It’s all the same, right?  As long as you eat food, it doesn’t matter what it is, where it comes from, how processed it is….

Except, of course, that’s not actually true.

Another article looks at the potential long-term risks of pesticide consumption, and notes that organic food is superior when it comes to traditionally heavily-sprayed crops.

A very recent study reviews current evidence, and concludes that there isn’t enough to prove that organic food is or isn’t better for human health!  It notes that there are more studies supporting the benefits of organic food than the “risks,” however.

Basically…we don’t have longitudinal studies to prove anything, but the early evidence shows that organic foods have higher nutrient and antioxidant content and lower pesticide residue.  This definitely leans towards choosing organic when possible, especially in heavily-sprayed crops.

Maybe Natural Living is *Saving* You

It’s true.  Maybe, just maybe, smart people have looked at all this evidence — and more! — and have concluded (as smart, informed people tend to do) that there’s something to all this ‘natural living’ business.

It’s not that you have to do it because someone else is doing it (you shouldn’t).  You don’t have to get into the latest, greatest superfood to fix all your problems (it won’t).  It’s not that you truly think you’re better than others because you do things the ‘hard’ way (at least, I don’t).

Actually, it’s about looking at all the available information and deciding — you know what? this makes sense!  Then doing better with what you have, when you can.

Nobody’s perfect.  And it doesn’t make you a better person to make natural choices.  But it just might make you healthier, so that while you’re here (because yes, we’ll all die someday), you can enjoy life a little more.

Do you feel like everyone wants you to believe natural living is going to kill you?