The Life of an Entrepreneur Family |
AD 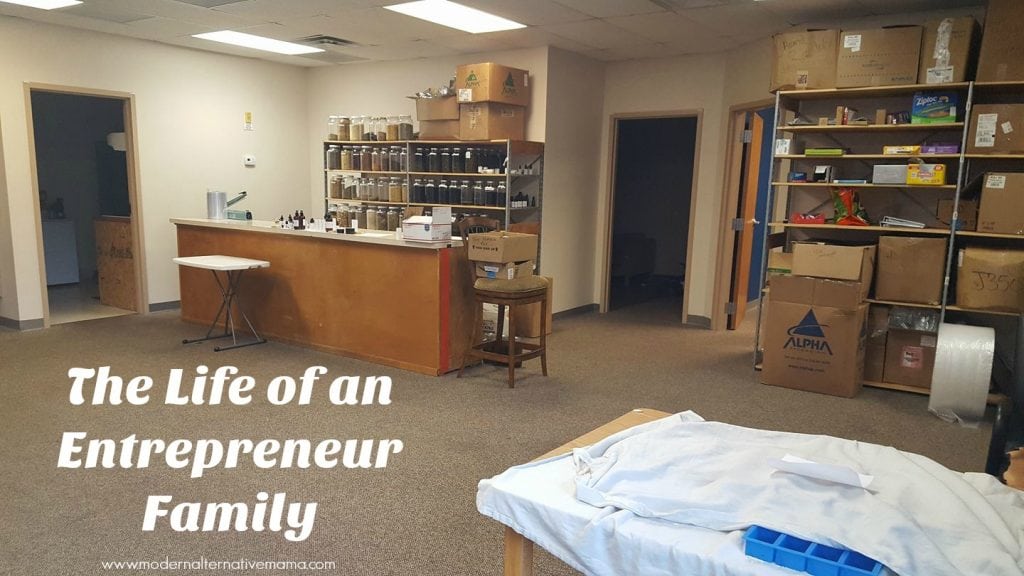 The Life of an Entrepreneur Family

It’s been about a year and a half since I announced our family’s next move — when we became (or, at that point, were about to become) a full-time entrepreneur family.  (See that post here.)

At that point in time, there is no way I could have predicted where we would be by now!

Since I really haven’t given you an update since then, today — at long last — it’s finally coming!

Ben quit his job on November 20, 2015.  Technically, he had “vacation time” saved up through the end of the year, so we had a month or so to figure out “what’s next” and enjoy the holidays a little bit before diving in.  After 10 years in the corporate world, he needed a few weeks to actually relax and recover!  Not to mention that the specific job he left had him on call a lot, and there were weeks he’d get called at 2 AM and have to deal with some crisis, and still go in at 7 AM for his normal day.

Those early months…we really had no clue what we were doing.  We spent a lot of time on “family” stuff, like going to the YMCA most days and doing homeschool stuff with the kids.  We had plans to hire a design firm to redo one of our websites/businesses, Tradishen.  It was supposed to be our primary source of income.  (Tradishen offers real food meal plans in Classic Clean, Vegetarian, and Paleo.)

That didn’t happen until sometime in spring, 2016.  In late December 2015, Ben decided we should revive what had been our “coop buys” group back in 2014, but run it through an actual website and do it all formally.  I agreed…with some hesitation.

One weekend in December, Ben and his buddy, Casey (a professional graphic designer), sat down and hammered out a website.  Earthley.  We put up a couple of group buys and tried to tell everyone about it.

Things went reasonably well with Earthley, although we struggled a bit.  I wanted to pour my efforts mostly into the blogs.  We had to do something about Tradishen, because it was, at the time, our primary source of income.  Ben liked doing Earthley.  Both of us felt like we were being pulled in too many directions and weren’t doing anything well.  And…the income wasn’t really coming in.  We weren’t making anywhere close to enough to live on.  In fact…we would not take any income from the business for all of 2016, although we didn’t know it yet.  Good thing we had savings!

By spring 2016, we were starting to feel the pressure.  We had to fix it up and do something about it.  And we had to get it going properly so we could grow it and start pulling an income from the business.

We contracted with a local design firm and began the process.  As with many things, it took longer and cost more than we had anticipated it would.  We had hoped to launch by mid-summer, but launch didn’t happen until November and happened very quietly.  At that point, the site was functional, but still wasn’t really done.  It was very frustrating because we were still dividing our efforts in many directions.

In August, we went on a short family vacation.  On the way home, we were brainstorming “what next” with Earthley.  It was still a coop/deals site, but my heart wasn’t in that.  I wanted — had always wanted — to make and sell my own products.  We’d looked into it many times, but had hesitated over fears of FDA regulations and other such things.

But I came up with an idea that I thought might be a compromise.  We’d make and sell elderberry syrup kits!  We wouldn’t be preparing it exactly, we’d just be making it easier.  So, we decided to go ahead and launch this as a unique type of coop buy in September.  We hoped to sell 50 kits, but Ben didn’t think we’d pull it off.  Earthley was just too small. It was not a recognizable brand item, and…well, we just had no idea.

In the end, when the buy ended, it surpassed our wildest dreams.  We sold over 200 kits!  We had finally found a market that we wanted to be in, and that people apparently wanted!

The plan, at this point, was still to push both Earthley and Tradishen to be successful.  In October, we released our second product on Earthley, and our first handmade, ready-to-use item: Good Night Lotion.  It wasn’t an instant success, but it sold.

November was crunch time.  In November, we planned to take advantage of holiday sales and offer a bunch of deals on Earthley.  About half would be deals for our handmade products — we would launch 6 or 8 new products this month.  The other half would be for companies we had worked with in the past.  At the end of the month, our final deal would be for Tradishen membership.  This was supposed to be our mini-launch and really jumpstart the growth of the platform.

But that didn’t happen.

Earthley’s handmade products began to grow…and grow.  But Tradishen didn’t.  We were in a hard place — we’d spent {way too much money} on redoing Tradishen, and it appeared we had no way to make that back.  Earthley was still running everything as “deals” but that no longer made a whole lot of sense.

In December, we launched several more Earthley products, with a plan to keep running both handmade items and deals moving forward.  But that quickly didn’t make sense, as Earthley’s sales began to grow, while sales of other companies’ products as deals dropped.

By the end of December, we still had not taken any income from the business, our savings was basically gone, and we had to make some hard choices.

We had a few people working for us part-time and from home, and we cut everyone’s hours.  One person chose to leave our team at that point.  Another wanted to start coming into the office and working on-site, which had never been our plan, but we went with it.  All we had was a table in the middle of our semi-finished garage.  We made all the product ourselves in our kitchen.  At the time, we only had about 10 different products, and we only made small batches every couple of weeks.

What happened next…was kind of insane.

Tradishen dropped to basically nothing.  It had been like pulling teeth all along to get any attention on it.  In fact, at one point towards the end of 2016, I offered a giveaway for Tradishen memberships, and for Earthley gift codes, and the Tradishen giveaway got about 5 entries, while the Earthley giveaway got over 100.  It was pretty clear to me what my followers actually wanted….

So in January, we made the goal to aggressively grow Earthley.

We launched two huge promotions, offering free trial items to our lists.  We launched a bunch of new items.  Then we advertised on Facebook and told everyone we knew, and we aggressively grew a Facebook group we had.  It went from about 3000 to 5000 in January (it stands at over 17,000 now).

Two weeks into the month, we bumped everyone’s hours back up — way back up.  By the end of the month, we had tripled sales from December!

This was amazing, but left us in a tight spot.  We were starting to outgrow our little home office, but didn’t have the money to rent a space yet.

We hired two more people in February to help us make the products.  We launched more products and did more promos, and continued to see growth.

Then March hit.  March was stressful all around.  We had some personal issues as a family to deal with. Most everyone in the office got sick at some point. Plus we dealt with some nosy people who poked into the business and seemed to want us to get shut down.  We made the decision that we had to move to a professional facility, no matter what.

At the beginning of April, we finally moved!  We rented an office about 10 minutes from our home, which was four times the size of the tiny garage we’d been in.  It did take us a couple of weeks to get everything completely moved, set up, and running smoothly again.  Mid-April, we hired another person to help with customer service and shipping.

Our little team had grown to 7 people!  And that brings us to today.

The Life of an Entrepreneur Family

It’s been a completely wild and unpredictable ride.  There’s no way I could have foreseen any of this.  It was never our plan to grow Earthley the way we did, or to change the focus.  Yet, it feels like a natural extension of what I’ve been doing on the blogs for 7.5 years now.  Earthley is the practical side of what I share here.  I give information and advice…and then provide a place to buy clean, affordable products.

I love making things.  I love creating recipes and remedies.  It’s always been one of my favorite things to blog about, and I’ve always had people say to me, “I love this idea, but I’m not a DIY person.  Do you sell this?”  In the past, I had to say no.  Now, I get to say yes!

They do like coming to the office, though, and the older kids like to occasionally help with simple jobs, like wrapping soap or adding labels.  Most all the kids who come to the office — our employees’ kids come sometimes too — enjoy helping from time to time.

Every week we’re still figuring it out.  No one sets our schedule for us, which is nice, but we have to carve out enough time to work, as well as enough time for our family.  Some weeks, one of those things gets more attention than the other.  There are weeks it feels like we barely touch the business outside of keeping it going.  And there are weeks it feels like we’re in the office all the time, our house is a disaster, and our kids are asking when (or if) we’re going to be done.

It’s kind of crazy, really.  Although we wouldn’t trade it.

Yes, we’re still homeschooling our kids through all this.  In another post, I’ll detail what that looks like for us now.  We’ve really let go of all labels at this point, because really, who cares?  Everyone’s a bit different and so is what works for them.

Here are some pictures from our life recently! Our office, right after we moved in!  Everything’s still in boxes and shelves are just starting to go up. Starting to organize our materials! Several orders on our counter, waiting to be packed and shipped! Our new labels!  And one of our newer products. Team building!  About once a month, we go out for Mexican food and have a great time.

And when I’m not in the office…. Playing with my boys on the trampoline in our yard! This kid is getting SO big already. …and some days, we just hang out at home and relax.

That’s a little slice of our lives right now!

What aspects of our entrepreneurial adventure do you want to know more about?