Why Does Public Breastfeeding Make People So Angry? |
AD 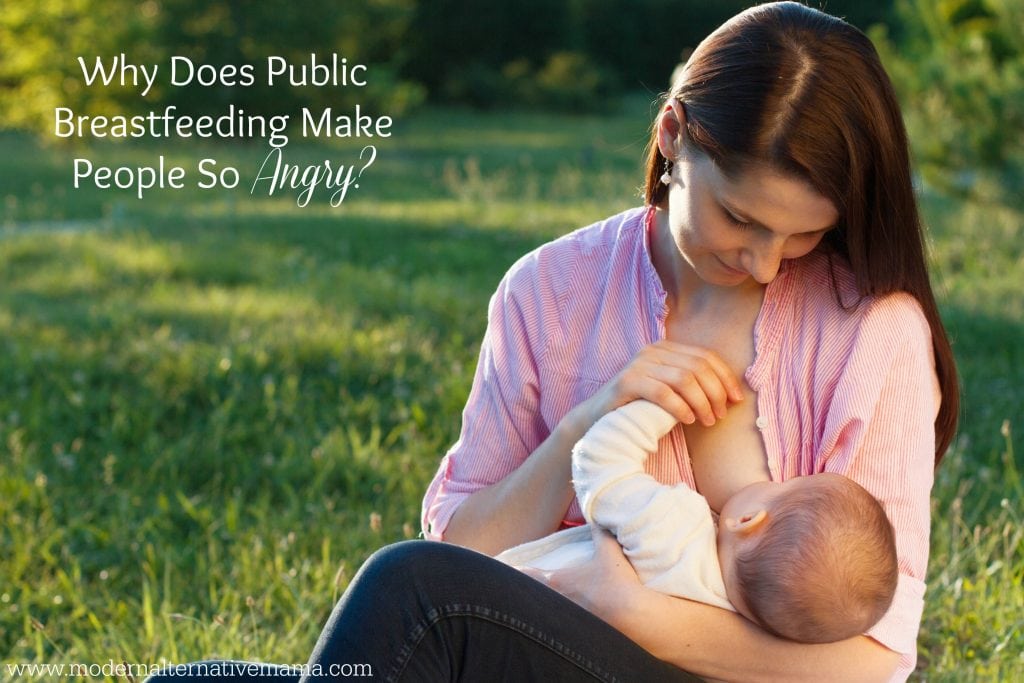 Why Does Public Breastfeeding Make People So Angry?

It’s kind of odd that we’re in the middle of 2016 and still having this conversation, but we are.

This week, two things happened — one small and one big.  The big one was the video of the woman getting chewed out by a man at Target for breastfeeding her baby.  She videotaped it on her phone, so everyone could see.  Luckily, people came to her rescue and told the man to stop, but still.  Harassment is not legal, not cool, and really upsetting.

The small thing was that someone commented on a very tongue-in-cheek post I wrote about public breastfeeding at the beginning of the year.  The person identified themselves as “Annoyed” and stated that “Just because you have a baby and you are breastfeeding DOES NOT mean the world revolves around YOU and your baby.”

That’s so odd.  I mean, it really is, honestly, an odd point of view.

So, we have to talk about it.  Again.

Why Does Public Breastfeeding Make People So Angry?

Let’s start with that comment I got because I think it represents a view that many people hold.

For some reason, a lot of people feel like public breastfeeding is about them and their rights.  That they shouldn’t have to see it or talk about it.  It makes them uncomfortable, so it’s rude for others to “do that” in front of them.  It’s not “decent.”

I am really tired of that.

Breastfeeding is a baby eating.  A person’s basic rights to eat, drink, and otherwise have their physical needs met, trumps anyone else’s right to “not be uncomfortable.”  In fact, no one has the ‘right’ to not be uncomfortable, ever!

We cannot say “Mom should have planned her outings around baby’s feedings” because babies can get hungry anytime, anywhere — most breastfeeding babies are not on a schedule. They can get hungry 10 minutes later or four hours later, and it’s sometimes unpredictable, especially in the early weeks.

We cannot say “Mom should have pumped for her baby,” because many moms do not have pumps. Or maybe they do not respond well to pumps, or choose not to go through the hassle of pumping, storing, cleaning, and everything else that is involved.

We cannot say “Mom should just give baby formula while out” because formula is less optimal for baby’s health and gut development. Plus, many babies will refuse it if they’re used to breastfeeding (or will refuse the bottle regardless of what’s in it), and what to feed a baby should be up to the mom, not the general public!

Let’s just get clear on peoples’ rights when it comes to breastfeeding.

The baby, as a tiny, immature human, does not have a concept of “wants,” but only of “needs.”  When baby gets hungry or requires comfort, it is a need.  Breastfeeding may be how they satisfy hunger or receive comfort.

If breastfeeding is how the baby’s needs are met, then the baby has the right to expect to breastfeed whenever s/he needs to.  This is a most basic thing.

The mom has the right to meet her baby’s needs whenever and wherever she is.  That is what the law says, and that is what common sense demands.

Some people (including the commenter I quoted) compare breastfeeding to defecating in public or having sex.  Breastfeeding is not elimination, and it is not obscene or sexual.  It is a baby eating.  Period.

The mother has a right to meet her baby’s needs, no matter what.  Regardless of who is around, whether or not she is covering, what she is wearing, or if she is being “modest.”

Believe it or not, the breastfeeding mother is not doing it “at” anyone, she is not doing it for attention, she does not want people to look at her or call attention to what she is doing.  She does not think that she is the center of the world, nor that her baby is. She is simply trying to meet her baby’s most basic need: hunger.

If you are not the mother or the baby, you have no say and no rights.

But no one has a right to make these decisions for someone else.  Ever.

And it’s super weird to say that a mom and baby think they are the “center of the universe” just because a baby wants to eat and a mother is feeding it…while demanding that an innocent baby not eat so that you, a full-grown adult, feel more comfortable.  That is the truly selfish part.

Of course, I often run across people who demand that others do things for their comfort while calling that person selfish for wanting to make a decision that’s right for them….  So odd.  (Really, it’s much more selfish to demand that people do things for you than it is for people to demand the right to make their own decisions!)

I understand that some people honestly didn’t grow up around breastfeeding, or grew up where it was only done in private, and still hold these views today.

It really is okay to feel that way — as long as this opinion isn’t placed on others.

It’s hard to have grown up one way, and change.

I remember when I had my first baby, and I had to feed her.  I was in my own home and had her under a big blanket. My father was in the room and acted really uncomfortable like he wasn’t sure where to look or what to do.  He didn’t say anything, though.  He was not used to breastfeeding (he hadn’t been around it in 20 years, and I’d never done it before, at that time).  It was a bit awkward.

By the time my third baby came along, my dad didn’t care anymore.  He just ignored what was happening and kept talking to me.  It became normal — it was really just a baby eating, nothing more.

Most of the people who feel odd about breastfeeding are likely in this boat.  They have not been around it enough for it to feel normal.  They feel uncomfortable about it.

I invite those people to learn more about breastfeeding.  Learn why people do it.  Learn to overlook how people feed their babies, as there are many ways to do it (and which way a mom chooses is between her and baby, it’s not up for discussion with others).  Examine why you feel so weird about it.

It’s okay to ask questions.  It’s okay to need some time to adjust.  Also, it’s okay to look away or walk away if you need to.  Just remember that your reaction is your business; it’s not on others to make you feel more comfortable.

Why do you think public breastfeeding makes people so angry?