CDC is “Scarier than I Initially Thought:” What is Scarier than the CDC’s Latest Zika Hysteria |
AD 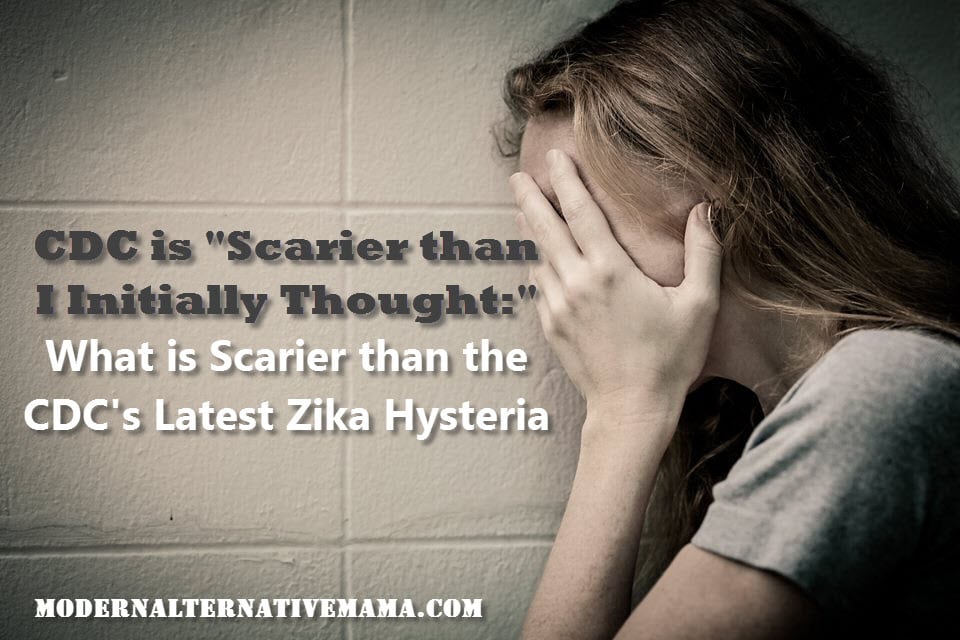 CDC is “Scarier than I Initially Thought:” What is Scarier than the CDC’s Latest Zika Hysteria

The CDC recently shared with media outlets that zika is scarier than they initially thought, but is that facts or fear-mongering?

If you own a radio, television, computer, or phone, you were probably alerted recently that the zika virus is “even scarier than the CDC thought.”

Even though there have not been many confirmed cases in the U.S., there’s ample evidence that no harm is actually caused by this virus and it is harmless in most persons (like all viruses), they are raising the red flag that we need genetically modified everything – from vaccines to mosquitoes, to save us.

I recently traveled to Central America, where I actually had met some folks who had been diagnosed with Zika. The general consensus is that it was no more than a normal, seasonal (warm season) flu virus with a rash. And it was definitely not causing microencephaly, or anything more than a cough. They also offered up a tidbit on its cause: pesticides.

Given that the zika virus is not serious in most persons and that no evidence has linked it to microencephaly, it is not so scary.

In Brazil, less than 5% of children diagnosed with microencephaly actually have mothers who had the zika virus. How is that confirmation?

We’ve seen such neurological issues in children that were the victims of Agent Orange and other pesticides, which Brazil has allowed. The pesticidal neurological conditions and “paralyzing nerve” issues are nothing new, in fact, they sound a lot like the pesticide-induced polio “outbreak.”

Brazil also permitted testing of the tDap vaccine on its pregnant mothers less than a year ago. And then, their babies are being born with health conditions? Nope, I see no correlation here.

Interestingly, the CDC also noted that mosquitoes which contained the virus could be reaching as far north as New York and San Francisco. What they didn’t add, is that genetically modified mosquitoes have been released in recent years in the U.S., particularly in the areas of zika concern. But don’t worry, the FDA “thinks” they are safe.

So basically, everyone panic.

What is Scarier than the CDC’s Latest Zika Hysteria

Let me tell you what I am scared of.

Since 1986, vaccine manufacturers have been completely immune (see what I did there?) to liability of their product. Your child can be killed by a vaccine today, and it can be confirmed negligence on the part of the manufacturer, and there’s not a thing you can do about it.

The CDC refuses to even study a correlation of vaccines and autism. They will not allow their scientists to even look into it for over a decade.Now, that’s science at its best.

Zero studies have been done on the safety of the current U.S. vaccine schedule. Yet, every pediatrician is recommending it for all children in the country. How is that for scary?

Two whistleblowers from the CDC have come out and said that they were forced to destroy data showing a clear link that vaccines cause autism. The government refuses to subpoena them, even though they have asked to be.

All media on this serious issue is being censored so that the general public cannot view it. But, even DeNiro thinks you should see Trace Amounts and Vaxxed, because he “is concerned, and wants to know the truth…”

I will not be canceling any trips south and I won’t be lining up for another vaccine. I definitely am not scared of zika, or any other virus hysteria put forth to promote more vaccines.

After careful research, the CDC is much scarier than I thought.

Are You Scared of the Zika Virus? Or, the CDC?