How I Taught My Baby to Sleep Well From Birth |
AD 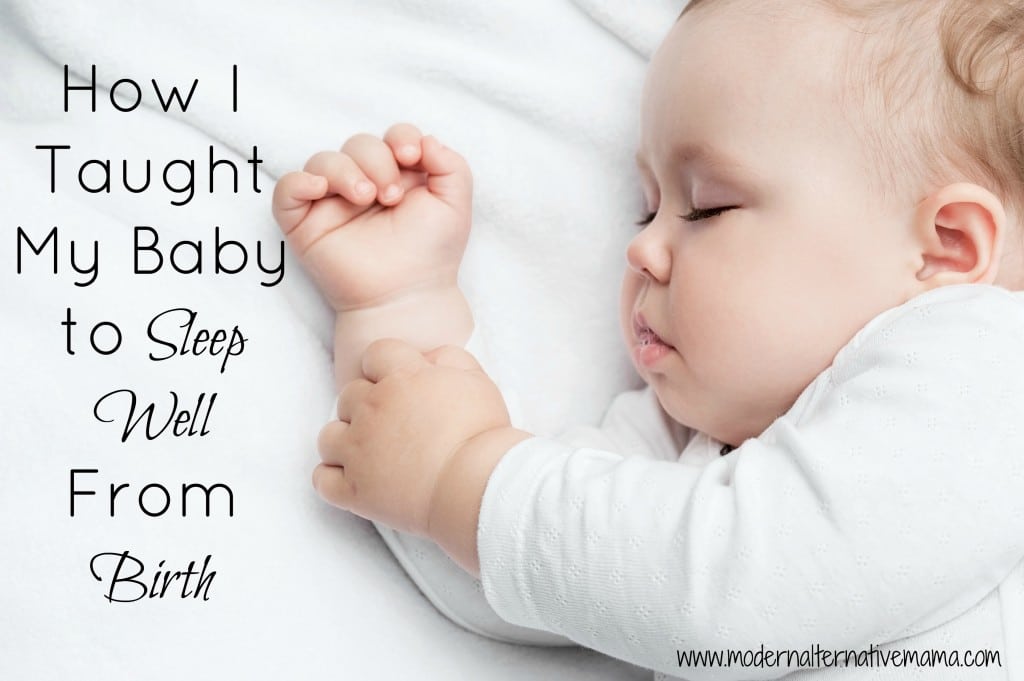 How I Taught My Baby to Sleep Well From Birth

I’m a mama of 5.  So, you might say, I’m experienced.  What “experienced” means is, “already made a bunch of mistakes.”

That’s very true.  I made a whole bunch of mistakes with my first four babies that I was determined not to repeat with my fifth.  I had a theory, before he was born, on why my older kids hadn’t slept well when they were small — and how I could make it be different with him.

He’s 8 months old now and sleeps very well.  He goes to bed most nights between 8 and 9 and sleeps for a few hours (while I enjoy time alone with my husband), and then wakes to nurse every 2 – 3 hours through the night.  But he never cries, he’s not fitful, he sleeps quietly and I don’t wake up tired.  He wakes for the day around 7:30.

He’s a consistent sleeper, a quiet sleeper, and not one to stay up until all hours.  The choices I made from birth helped to shape this.  Want to know how I did it?

How I Taught My Baby to Sleep Well From Birth

I came up with a plan, based on all the mistakes I made with my other babies.  And, it really worked.  My baby did and does sleep well (minus little precocious “9-month sleep regression” which I’ll discuss in another post).

From the day he was born — and it’s still true now — daytime and nighttime sleep were different.  During the day, he fell asleep anywhere.  Most of his naps were on someone’s lap, and in the middle of the living room, or wherever we happened to be sitting.  There was light.  People were running around.  The TV was on.  If we were out and about, he was sleeping in our carrier against me.  We took no special precautions to encourage daytime sleep, except to hold him and help him fall asleep when he was tired.

But at night, the lights went off.  There was no talking, no noise.  Sometimes he falls asleep when I’m nursing him and watching TV, but he’s transferred to his bed.  Other times he falls asleep while I nurse him while lying in my bed, and then I transfer him to his own bed.  We expect it to be dark and quiet for him.  Once I go to bed, he usually joins me in bed, but it’s still dark and quiet.  Definitely different.

#2: Have a Quiet Place for Baby to Sleep

I mentioned that sometimes my baby falls asleep while I watch TV — but then he’s transferred.  It’s rare that we keep him in a room with any noise or light.  It only happens if he’s taken a late nap and is just beginning to settle when I’m almost ready for bed.

With my other boys, I made the mistake of trying to watch TV and relax with my husband in our bed, while the baby was asleep in his bed next to us.  It didn’t bode well for quality sleep early on, and as they got older and were easily distracted by the TV, it only got worse.  They were hard to settle and woke often.  We deliberately did not do this with our current baby (we watch TV downstairs; he has a quiet and dark place upstairs to sleep) and he’s been a much better sleeper.

We always made sure to change him before bed, into warm, soft clothes.  Some of my babies really did not like the feel of fleece pajamas, so we never used them.  He does not like to be cold, and will not sleep independently at all if he is cold.  (Too bad, because I like my bedroom on the cool side, and I usually don’t get that now.)  We started using disposable diapers at night because my other babies would wake frequently to be changed, even if they weren’t hungry.  He usually does not need to be changed at night, so no one has to get out of bed.

As they get older, they have other things that they prefer — such as specific pajamas, a special blanket, their teeth may hurt as they’re getting new, etc.

#4: Respond to Their Hungry Cues Quickly

We co-sleep, so within a week or so of birth, he was able to indicate that he wanted to nurse by quietly turning his whole body towards me and nuzzling.  He does not make any noise.  I only need to half-wake to help him latch on, and we both keep sleeping!

If he is in his own bed, as soon as I hear him begin to fuss, and I know he’s not going to re-settle, I scoop him up and settle him next to me to nurse.  I don’t wait until he is really crying.  (But if he’s shifting around and not yet fussing, I will wait to see if he’ll re-settle.)

#5: Feed Them Often During the Day

This is something I’ve gotten lazier about as he’s gotten older, simply because he’s very “busy” and willing to play quite a bit longer!

But, one mistake I made with my older babies in the very early weeks was to sleep in during the morning when my husband could watch them.  They would go 3 – 4 hours without eating, mostly sleeping, and then I would nurse them frequently throughout the day…and night.  They were only capable of doing one longer stretch a day, and they were doing that stretch in the morning (from around 7 or 8 until 10 or 11).  This shifted their whole day back so that they were “waking up” around 11, nursing throughout the day, and were not “ready for bed” until 11 – 12 at night, or later.  Then they nursed frequently all night, only to be ready for a long sleep mid-morning again.

I did not make that mistake this time!  I insisted that if my husband were watching the baby while I slept, that he bring the baby to me as soon as he was hungry, and not try to hold him off with a pacifier or rocking to sleep.  I was pretty tired for a week or so while he was settling in, but he quickly started to do his longest his stretch from about 10 PM – 2 AM.  After a few more weeks he was going to bed for the night around 8:30 – 9, and sleeping for 2 – 4 hours before waking to nurse the first time.  This tip was really huge in encouraging him to sleep well.

#6: Settle Them to Sleep in Lots of Ways

I usually nurse my babies to sleep.  But not always.  In the early weeks, sometimes Caleb would only fall asleep if I put him up over my shoulder and patted his back — I quickly figured out that was a favorite for him.  (If I take him out of the car asleep and lay him in my arms, he’ll wake.  If I put him over my shoulder, he’ll usually keep sleeping.)  I rocked him, patted him, and others snuggled him too.  In the early weeks, he’d take a pacifier, but he was never a fan and quit taking it at all by the time he was a few months old.

He will fall asleep now if my husband snuggles him, or if my daughter does.  He often naps on my daughter’s lap mid-day.  He’ll fall asleep in the baby swing easily at church — we don’t have one this time.  He’s pretty flexible on when/where/how he’ll fall asleep because we’ve always used different ways!

Before naps, I just make sure they’re not hungry.  My baby usually nurses before naps, or even all the way through naps!

Before night, though, feed them a lot.  Nurse them every 30 – 45 minutes (or at least offer).  Most babies “cluster feed” in the evening hours, which means nursing very frequently.  Sometimes it feels like non-stop!  This usually means they are trying to get enough so they can sleep in longer stretches.  Encourage this, and even try to do it on purpose!

Once baby is old enough for solids (at least 8 – 9 months, eating regularly, not just little tastes), offer plain yogurt or avocado in the evening hours to help fill the tummy…then nurse, nurse, nurse!

Does my baby sleep all night without waking up, in his own bed?  Absolutely not, not even at 8 months.  He still nurses quite a bit throughout the night.  (Partially my fault, partially the age.  He’s so busy during the day that he’ll go longer stretches without eating, and then make up for it at night.  I could encourage it to stop by offering to nurse more often in the day, or taking him to a quiet room so he wouldn’t get so distracted, but I usually don’t.)

What I’m looking for in “good sleep” is:

Basically, he needs to sleep at night and not get twitchy and fussy and keep me up.  As long as that happens, then no matter how often he nurses, I’ll still get enough sleep.  I’ve found this baby the easiest of all of mine — in part because he is an easy baby, but in part, because I know what I’m doing.  He’s actually a very light sleeper — if someone opens the door to check on us and then closes it with a click, he’ll wake up.  He’s been that way since birth.  And yet, he’s generally a good sleeper!

We had a little bit of trouble for a few weeks around 7 months, when he was doing a little of the “9 month sleep regression” (yes, it was early!  but for the same reasons as it usually happens around 9 months), but I’ll share in another post how I solved that!  We’re back to a good routine and peaceful nights again.

Have you taught your baby to sleep well from birth?  What worked for you?