Psychiatric Medications for Children: Is Your Child a Guinea Pig? |
AD 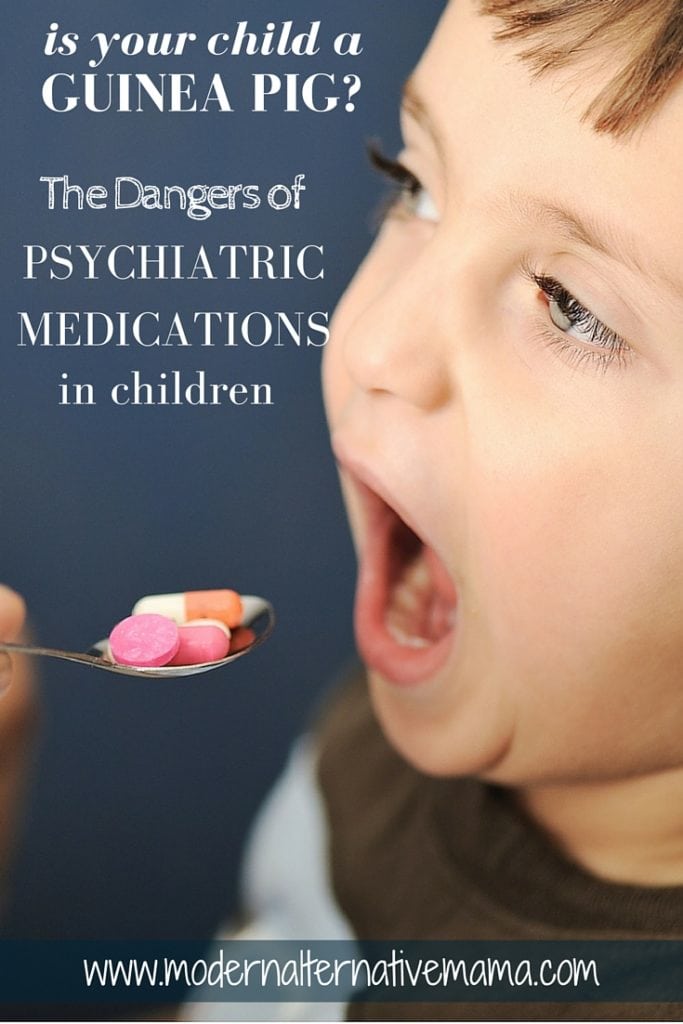 Psychiatric Medications for Children: Is Your Child a Guinea Pig?

As a mama who has chosen to take the road less traveled and treat my son’s behavioral disorders naturally, I have done an awful lot of research about psychiatric medications and their effects on children. Today, we have made huge improvements in hyperactivity, virtually eliminated anger and aggression, and even completely rid my son of symptoms of dyslexia. He is a new kid and I would do it all over again. But it’s been a long road of trial and error.

I knew from very early on that some things weren’t quite right… my son had some minor sensory issues as a baby, and as he grew and became active, he developed hyperactivity and poor impulse control. He never tired and was very destructive. He had weird obsessive behaviors and was increasingly difficult to reason with as he got older.

We were having trouble addressing his behavioral problems, so our pediatrician referred us to a children’s therapist. After a couple of months of working with our son, she suggested we take him to a psychiatrist who could put him on ADHD medication. He was three.

To be quite honest… I was tempted. Someone was finally validating that there was something seriously wrong and it wasn’t my parenting that was causing my son to act out. The idea of medicating him in order to make his behavior easier to manage was appealing.

But ultimately, I wasn’t looking to make him easier to manage; I was looking to help him grow into a healthy child. So, I dove in whole-heartedly and began to research healing his behavioral disorders through natural methods.

Today, millions of children are on psychiatric medications in the US, with over one million of those under the age of five! (source)

I am all for parents making informed medical decisions for their children, but when that many children are on mind altering psychiatric medications, there is a problem. Why do so many children “need” medication? Why would infants and toddlers be given these psychiatric drugs? And, if we are going to be drugging this many kids, what are the consequences?

The Risks of Psychiatric Medications for Children

Like all drugs, common psychiatric drugs used for children have risks of side effects.

ADHD/ADD medications carry the risk of cardiac toxicity, irregular heartbeat, and even sudden death due to adverse cardiac events. (source) In addition, they have been found to impair proper growth, diminishing growth in both height and weight of children taking the medications, particularly those taking the drugs for longer than 18 months. (source)

These side effects are frightening enough, but there was something more I was concerned about as I weighed my options.

First and foremost, I was afraid of medicating my son because I didn’t want to put a damper on his sharp wit, fun personality, or amazing sense of humor. Certainly, there is plenty of research that confirms that psychiatric medications can cause patients to experience personality changes.

One study labels this side effect “SSRI- induced indifference.” SSRI (selective serotonin reuptake inhibitors, i.e. antidepressants) can cause “emotional blunting,” meaning a child is unable to properly express his feelings while on the drug. Additionally, children (and people of all ages) may “under perform” due to the lack of motivation caused by these drugs. (source)

While these “personality change / emotional” side effects were my original reason for avoiding psychiatric medications for my son, I’ve since learned so much more about the dangers of these drugs.

Side effects for anti-anxiety meds also include depression and suicidal thoughts.

Stimulants (used for ADHD/ADD) may cause personality changes.

Mood stabilizer side effects may include agitation, mood swings, and abnormal thinking. (source)

Many acts of violence have been carried out by children, adolescents and young adults either on or withdrawing from psychiatric medications, including Kip Kinkle, who shot and killed his parents, then drove to his high school and opened fire, killing two and wounding 25 others in Springfield, OR in 1998; Eric Harris, who, along with Dylan Klebold, shot and killed 12 students, one teacher, and then himself at Columbine high school in Littleton, CO, in 1999; Jeff Weise, who in 2005, shot and killed his grandfather and his grandfather’s companion before driving to his school in Red Lake, MI and killing seven, wounding seven others, and killing himself; Adam Lanza, who, in 2012, killed his mother, then went to Sandy Hook elementary school in Newtown, CT and killed 20 children and 6 staff members before killing himself; James Holmes, who opened fire inside an Aurora, CO, movie theater in 2012, killing 12 and wounding 70 more.

Each of these perpetrators had been on mind-altering psychiatric drugs prior to carrying out these mass shootings. There are countless more stories like these of young people carrying out acts of violence or committing suicide while on these medications. (source) Psychiatric Medications in Children: Do Doctors and Drug Companies Really Have Your Child’s Best Interests at Heart?

In the documentary “The Medicated Child,” child psychiatrist Dr. Patrick Bacon says he determines medication for his child patients based on his “best guess about what is the diagnosis and, largely, what has been tried in children that age.” He goes on to admit that there are no definitive tests for psychiatric illnesses, but that medicating children for psychiatric disorders “really is, to some extent, an experiment, trying medications in these children… It’s a gamble, and I tell parents, there’s no way to know what’s going to work.”

The documentary follows three children who are on psychiatric drugs, all of whom experience increasing number of drugs and dosages as they age, including Jacob Solomon who began to be labeled “ADD” at the age of three by preschool teachers due to lack of impulse control. As Jacob’s dad says, “What three-year-old has impulse control?” Eventually, Jacob began taking Ritalin for the hyperactivity, which, his parents say, led to anxiety. The anti-anxiety drug caused tics, and by age nine, he was diagnosed with a mood disorder. By the age of 10, he was on eight different medications, and by age 13 had been diagnosed with bi-polar disorder.

The diagnoses of bi-polar disorder in children is the cornerstone of the film, which relays the history of how this diagnosis came to be. It was in the 90s that Dr. Joseph Biederman, a psychiatrist, began to diagnose children with bi-polar disorder. He began promoting the medicating of children with powerful anti-psychotics.

As other physicians jumped on board, more and more children received this diagnosis and were put on medication. In her article “Drug Companies & Doctors: A Story of Corruption,” Marcia Angell says, “Thanks largely to [Joseph Biederman], children as young as two years old are now being diagnosed with bipolar disorder and treated with a cocktail of powerful drugs, many of which were not approved by the Food and Drug Administration (FDA) for that purpose and none of which were approved for children below ten years of age.” (source)

In 2008 it was discovered that Dr. Biederman and his colleagues had received millions of dollars from drug companies whose drugs they had been testing and promoting. (source)

The Food and Drug Administration Regulatory Modernization Act of 1997, passed by the Clinton administration, changed quite a lot about how the pharmaceutical industry operates. It effectively fast-tracked drug studies, and provided incentives and requirements for drug companies to test drugs on children. The act also abolished a previous law preventing manufacturers from advertising their drugs for off-label uses.

Following this act, studies done on children have increased… and have shown that many psychiatric drugs that work for adults do not work well, or even at all in children. In 2004, hearings were held which investigated the use of psychiatric drugs in children. Many parents testified about the deaths of their children following the use of psychiatric medications. As a result, a “black box” warning label was put on antidepressant medications, warning of an increased suicide risk. When the use of antidepressants began to decrease, doctors began prescribing more anti psychotics, which are now used in children and infants.

Still, today, these drugs have not been properly studied, and those studies that have been conducted are largely paid for by pharmaceutical companies.

What About Kids Who Need Drugs?

I understand the difficulty of parenting a child with behavioral disorders. I, too, have been desperate for things to get better, but I have learned the causes behind these disorders and have been able to treat and cure my son with nutrition. You can read here about the surprising food that I found caused episodes of anger and aggression for him. For some children, simple diet changes make a huge difference right off the bat. For others, an intensive healing diet like GAPS is in order (our family sticks with GAPS and paleo foods). If you are reading this and you aren’t sure where to start, read my post about the five ingredients to remove from your child’s diet now.

If you have been considering medication, please consider making nutritional changes. We have personally found a specially-formulated type of magnesium for brain health to be helpful, and have recently started using passionflower extract after learning about the amazing effects it can have on hyperactivity.

Of course, as with all medical decisions, it is important you consult with your doctor. It can be dangerous to abruptly take a child off of psychiatric medications.

Has your child been given a psychiatric medication…or would you ever consider one?