Dear Mama, It’s Not Your Fault: Parenting a Child with Behavioral Disorders |
AD 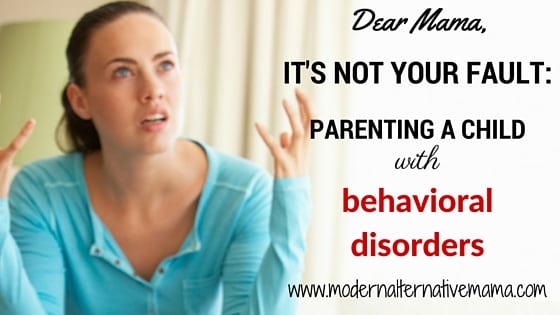 Dear Mama, It’s Not Your Fault: Parenting a Child with Behavioral Disorders

Drop the guilt! If your child has behavioral disorders, things can get better. Use these peaceful parenting techniques to bring calm to your child and home.

Being a mama is a tough gig. It’s the most rewarding, joyful, inspired undertaking I’ve ever tackled, but it’s hard. It’s through the really hard moments, though, that I have grown and stretched, not just as a mom, but as a person.

Being a mama has made me a better person.

All Signs Point to… Behavioral Disorders

When my son began walking, he became hyperactive, and by the time he was two, we had nicknamed him “the tornado.” It would be easy to laugh that off as typical “boy behavior,” but things got worse as he got older.

I thought if I just disciplined enough or kept him busy enough, his behavior would improve. That wasn’t the case, and when he was three, his hyperactivity and impulsivity had become severe enough that he was endangering himself and his little brother. We sought help from a children’s therapist, who advised us to seek medication. (We chose to take the natural route and have been healing him with nutrition ever since. Read about the dangers of psychiatric medication use in children here.)

Within the next year, my son developed tics, aggression, and episodes of anger and defiance. I became secluded as his behaviors became unbearable around other children, whom he would hurt in outbursts of anger.

Life was tough and I blamed myself.

I was becoming more and more lonely in my struggle to figure out how to parent him.

Dear Mama: It’s Not Your Fault

We suffered through these behaviors for years before finally putting the pieces together that he had symptoms of oppositional defiant disorder, and a condition called PANDAS (Pediatric Autoimmune Neuropsychiatric Disorders Associated with Streptococcal Infections), which we later realized were likely triggered by an illness he had around the time the new behavioral symptoms started.

By the time he was six, I had put many pieces together and concluded that something was very wrong on a deeper level, something that no amount of discipline could fix, and the strong discipline I had been attempting for most of his life had been futile.

It wasn’t my fault. His behavior was not due to lack of discipline, and disciplining him harshly was not helping. If you have a child struggling with similar behaviors, I want to tell you: it’s not your fault, either.

Today, my son is doing better than ever, thanks, in large part, to diet and biomedical interventions (herbal medications and vitamins). You can read here about the five ingredients to avoid for children with behavioral disorders (this is where we started).

But it wasn’t just the food.

I actually did learn to parent him better, and I don’t mean discipline. I learned to reach the heart of my son and find ways to connect with him and relate to him.

Early in his life, I thought if I spanked him enough, he would have good behavior. As he grew older and his behavior became increasingly difficult, spanking him actually made things worse. Much worse. He would become so angry that he would scream, throw things, and even retaliate sometimes.

When you have a child constantly testing boundaries, and he has totally worn you down, you have to get creative, and you have to get serious about reaching your child. After all, I had worried that we would lose him altogether and never be able to have a healthy relationship with him.

Here’s how I did that:

I prayed for my son; I prayed with my son; and I taught my son to pray for himself. We learned about spiritual warfare and how we can use our words as powerful weapons against attacks of anger and aggression. These days, he can pray for himself and the anger and defiance will lift right off of him.

Once he gets through an episode, I ask him what was going on at the time he became angry so I can help him prevent outbursts in the future. By talking through his triggers, he stays motivated to avoid triggers like foods and situations that affect him poorly.

Additionally, we talk about the kinds of behaviors we want to show in our house. He agrees that he doesn’t like to be angry or have poor self-control, so we place a high importance on showing fruits of the spirit (peace, love, joy, kindness, faithfulness, patience, goodness, gentleness, and self-control [Galatians 5:22-23]).

We do still have to have consequences for unacceptable behaviors, such as being disrespectful, hurting others, or disobedience. Sometimes that means he spends time alone or loses a privilege, but more often than not, a firm redirection by simply reminding him that a particular behavior is unacceptable is enough.

#4: I Changed My Behavior

Perhaps the most important change of all was in how I conducted my own behavior. I have been on a journey over the past year to become more peaceful myself so I can be a peaceful parent.

If my son is angry, and I get angry, then I discipline him in anger, we just perpetuate the cycle in our home. Before long, everyone is angry and joy and laughter are nowhere to be found. That is not the tone I want to set in my home.

I do this by playing praise music, diffusing relaxing essential oils, and trying to speak to my children the way I want to be spoken to: kindly and not in harsh tones. Honestly? I fail at some point every day. But things are getting better.

If you are struggling with a child with behavioral disorders, and you aren’t sure where to start for things to get better, get my free e-book 10 Ways to Improve Your Child’s Behavior NOW by clicking here.

Peaceful Parenting is the Right Fit for Children with Behavioral Disorders

What peaceful parenting looks like will be different in each family. I would dare to say it is easier to peacefully parent neurotypical children than children with behavioral disorders.

However, it is even more important to peacefully parent children with behavioral disorders so that everyone can stay calm and happy, even in stressful moments!

It isn’t always easy to take control of your own emotions in heated moments, but it is worth it as you begin to change the climate of your home and a sense of peace begins to permeate your life, rather than letting anger, chaos, and despair take over. Your child’s difficult behaviors aren’t your fault, but you can help them get better.

Do you have a child with a behavioral disorder? What peaceful parenting techniques have you found help your child?