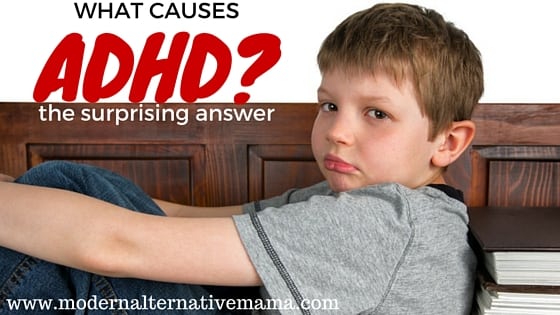 What Causes ADHD? The Surprising Answer

I have been around the block a time or two with ADHD and related disorders (ADD, ODD, OCD, Autism, etc). When I was told to put my son on medication for ADHD when he was three, I dove in full force to learn about how to heal the disorder. What I’ve learned about what causes ADHD is both fascinating and overwhelming. Here, I’ll break it down into bite-sized pieces for you!

How Common is ADHD?

Yes and no. A 2009 study found evidence that those suffering from ADHD “have lower-than-normal levels of certain proteins essential for experiencing reward and motivation.”

According to lead study author, Nora Volkow, “These deficits in the brain’s reward system may help explain clinical symptoms of ADHD, including inattention and reduced motivation, as well as the propensity for complications such as drug abuse and obesity among ADHD patients.”

More recent research, however, points to a combination of factors, including genetic makeup and environmental factors.

That being said, when we get to the root causes of ADHD, we can begin to treat ADHD holistically, and, ultimately, avoid the need for medications. So let’s delve further into what causes ADHD, shall we? The cause of ADHD is multifaceted. While brain chemistry and genetics do play a part, they are combined with a combination of other factors, including maternal health, environmental factors, and nutritional deficiencies. But there’s one underlying condition for all of these factors: poor gut health.

More Than a Brain Imbalance, ADHD is a Gut Imbalance.

In recent years, studies have begun to link gut bacteria to mental health, indicating that disorders from depression to autism may be due to poor gut health. Indeed, Dr. Natasha Campbell-McBride says in her book Gut and Psychology Syndrome, “I have yet to meet a child with autism, ADHD/ADD, asthma, eczema, allergies, dyspraxia or dyslexia, who has not got digestive abnormalities.” (Emphasis mine.)

This study found that disorders including ADHD, autism, and related spectrum disorders are caused by gut bacteria imbalance, but that improving gut health through diet changes and correction of bacterial imbalance can heal these disorders.

What is Gut Bacteria Imbalance?

If you have a gut bacteria imbalance, it simply means that you have an overgrowth of bad bacteria (pathogens), and a deficiency of good gut bacteria. This is also known as gut dysbiosis, and eventually leads to leaky gut (a syndrome in which the lining of the gut develops holes, which allow proteins to leak through and cause the body to attack itself in other areas).

Poor maternal gut health at the time of conception and throughout pregnancy, followed by feeding the child a poor diet (perhaps using formula, giving rice cereal, and, later, feeding refined, processed foods), plus pharmaceuticals like vaccinations and antibiotics all create a perfect storm for poor gut health.

Depending on a child’s genetics and immune system health, these assaults on the body could result in a number of disorders, including eczema, asthma, autism, or ADHD.

How Does Gut Bacteria Imbalance Cause Symptoms of ADHD?

Notice I said symptoms of ADHD. That’s because once the gut is healed and the bacterial imbalance corrected, disorders like ADHD simply go away, indicating that the problem wasn’t ADHD in the first place. ADHD is simply a name given to a set of symptoms and behaviors.

Did you know that neurons aren’t created only in your brain? You also have neurons in your gut. These neurons produce neurotransmitters like serotonin and dopamine, which are also found in your brain. Seratonin, which balances mood and affects manifestations of depression and aggression, is found in highest concentrations in your intestines, not your brain! (source)

Some of these signals can instigate an anti-inflammatory reflex with signals to the brain, helping the brain to deflect inflammatory attacks by releasing mediator cells, which interact with immune cells to fight off inflammation. This role may help with modulation of brain function and mood. (source)

When inflammation is present, however, these actions are impeded, and brain function is compromised.

In other words, a healthy gut protects the brain.

Furthermore, when a leaky gut is present, your gut cannot properly absorb nutrients from your food, preventing the brain from receiving the nutrients it needs to function properly, like omega and saturated fats, plus vitamins and minerals.

Once a child has developed one of these disorders, gut healing must take place in order to heal the disorder. Several factors contribute to healing the gut, including diet changes (read: Is the Paleo Diet Healthy for Kids?), probiotic therapy (read about how to choose a good probiotic), and nutritional therapy.

This study found that ADHD can be successfully treated with micronutrient therapy, ie. vitamins and minerals. You can read about our favorite mineral supplement for treating adhd, which has helped our son a great deal.

My favorite way to heal the gut is the GAPS diet, aka: gut and psychology syndrome, created by Dr. Campbell-McBride especially to treat disorders like ADHD. Along with nutritional therapies, the GAPS diet has helped our family come a long way in healing our guts.

If you are just starting out and not ready to dive in to something like an intensive healing diet, start out by removing these five ingredients from your child’s diet. Oftentimes, just getting the worst junk out of your child’s diet will have an immediate impact on his behavior.

Do you believe that poor gut health is really what causes ADHD?