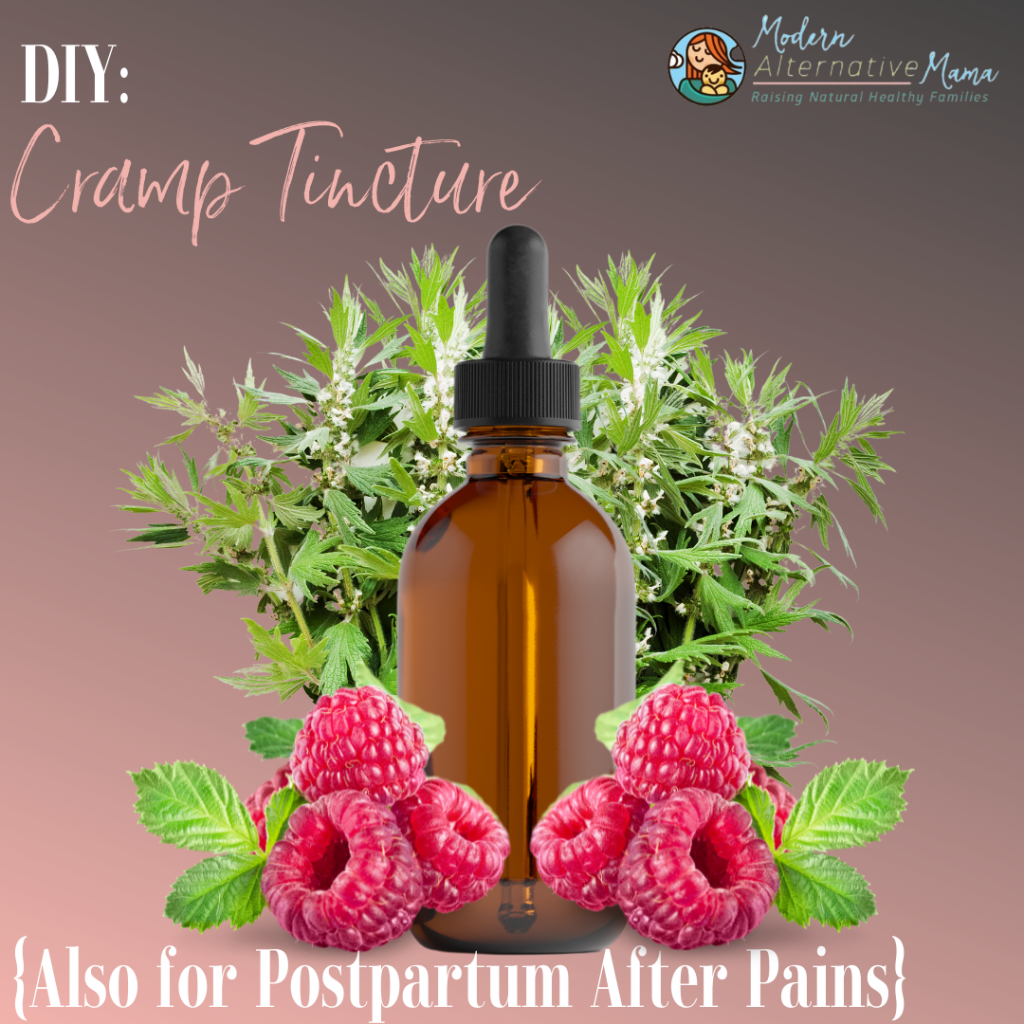 I finally got around to starting this afterpains and cramp tincture last weekend — which is honestly sooner than I managed last time.  It should be ready right before I hit 40 weeks, so I’ll strain it, bottle it, and add it to my postpartum bag.  Last time my husband had to figure out how to strain it and how much to bring me and it was a bit of a mess.  This is much better!

Even so, I’d recommend starting this sooner than I did.  There’s no guarantee you’ll carry to 40 weeks (though you could carry longer!).  I’d suggest starting it no later than 31 weeks (it would be ready at 37), and preferably at 28 weeks (ready by 34).  Then you don’t have to worry about it being done and ready when you need it.

But let’s take a step back.  What is this and why do you need it?

After each baby, the after pains get stronger.  These are the contractions that help to shrink your uterus back to its normal size.  They last up to a week after birth, and occur especially when you are breastfeeding (the oxytocin released during breastfeeding causes the contractions).  They’re a good thing, because they mean your body is healing.  But, they can be quite uncomfortable.

Plus, most moms lose a fair amount of blood during birth — even if it’s normal.  It’s part of the process.  And, your hormones are trying to regulate, your milk is coming in, you might be exhausted from labor….

You need something to help combat all of this!  It’s not going to be uninterrupted hours of sleep (which would be nice!) with a brand-new baby to feed.  So, the herbal tincture comes in.

**If you love this idea but don’t want to make it yourself, you can buy it from me over on Earthley!  We call it Ease the Ache.  Clever, right?  Plant-based remedies, from the Earth.  Herbal tinctures, salves, soaps, lotions, and more.  I’d love to send you some! :)**

You’ll find as many recipes or versions of this as you will women.  Many use cramp bark, motherwort, black haw, yarrow, comfrey leaves, and other herbs.  Everyone’s needs are a little different.  I chose the herbs that made the most sense to me, that have seemed to be the most beneficial over time.

These are the four I chose.  Black haw is very similar to cramp bark.  Comfrey is for general healing, and high in calcium, but I prefer to use externally only (and I will use it that way).

I’ve been using the first two throughout pregnancy and especially in the third trimester, with my third trimester tincture.  I’m adding that to my morning cranberry juice mix (which consists of unsweetened cranberry juice, gelatin, and a little raw honey — more on that later this week).  I take my liver pills with it, too.

This tincture is an alcohol-based tincture.  If I am making tinctures primarily for vitamins and minerals I’m more likely to use glycerin.  Also if I make them for children.  In this case, I’m making it just for me, and I’m after medicinal properties.  I don’t drink alcohol, typically, but I actually get very little alcohol per day — maybe a couple teaspoons.  I’m okay with that.  If you prefer, you could use glycerin or apple cider vinegar instead.

I have also used this cramp tincture for general menstrual cramps.  It works SO well!  This is definitely not just for postpartum — it’s beneficial to any woman.

Step 1: Add all the herbs to a glass jar.

Step 2: Pour vodka over it to cover.

Step 3: Add a lid and shake until combined.

Step 4: Let this mixture sit in a cool, dark place for 6 weeks.  Strain through cloth and store in dark brown glass bottles.

It’s easy!  It takes only 5 minutes to put together, 6 weeks to ignore, and another 5 minutes to strain and bottle.

How to use cramp tincture: Use 1 dropper full of cramp tincture as needed to control after pains or cramps.  I used it about every 3 – 4 hours for the first day or so for after pains, and I use it usually once during my period for cramps — but I rarely need it anymore.

Remember, if you love this idea but would rather just buy it, I offer it for sale over on Earthley, my sister business.  It’s called Ease the Ache.  Plant-based remedies from the Earth. 🙂

Have you ever used an after pains or cramp tincture?  Did it help?