10 Things the Mainstream is Right About Natural Health |
AD 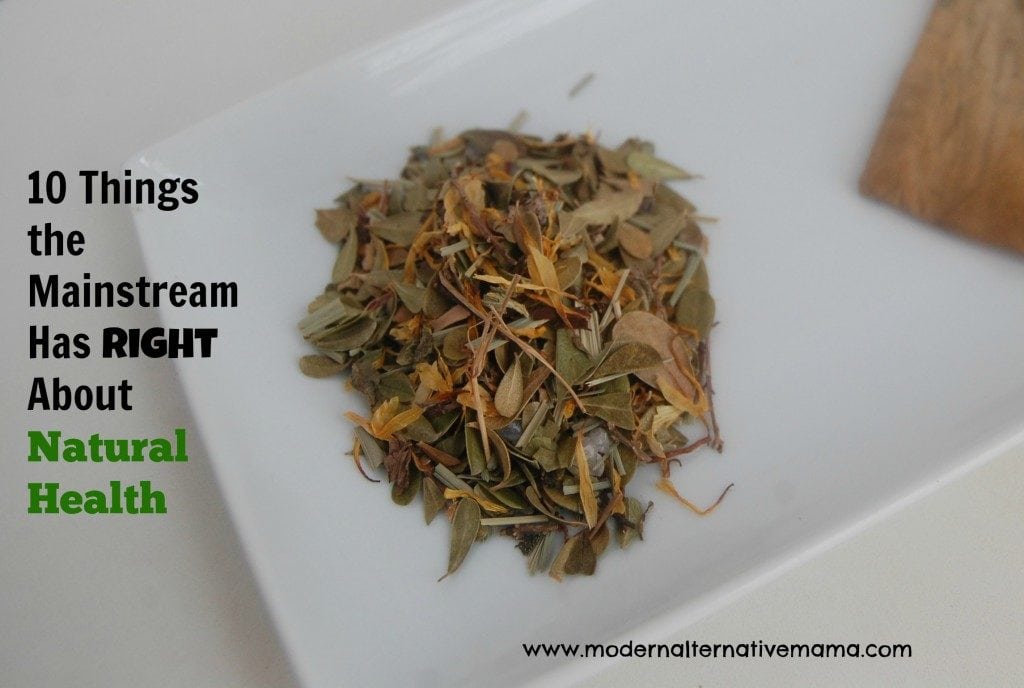 10 Things the Mainstream is Right About Natural Health I don’t know about you, but often when I read a mainstream article about natural health, I get pretty frustrated.

A lot of the mainstream is pretty “anti” natural.  They don’t believe that nutrition is all that important, that homeopathy works, and they think most natural remedies are simultaneously inert and dangerous (don’t even ask me how that’s possible — I always laugh at this one).

The thing is, though, they’re not wrong about everything.  In fact, they’re right about some things, and the reason they’re so anti-natural is because a lot of the alternative community doesn’t acknowledge these things.  Now, they’re going overboard — throwing the baby out with the bathwater, as it were — but they do have a point.

Let’s take a look at 10 ways the mainstream is right in their criticism of natural health.

#1: Not All Supplements Are Good

The mainstream claims that supplements are all but useless.  In fact, a few highly publicized (and criticized) studies found that certain types of supplements increased the risk of death!

How can that be?  Well, most of the supplements that are found in your average grocery store — the kind that most people take — are synthetic and have filler ingredients.  They aren’t well absorbed by the body and the extra ingredients could even be toxic.  Most of the time, we aren’t made to need such mega-doses anyway.

Quality, whole foods supplements are quite a bit different though.  There are few I would recommend, but they are out there.  Be careful not to get caught in the trap of thinking you need to take a whole lot of vitamins or that low-quality vitamins are going to help maintain your health.  They won’t.

#2: Temporary Cleanses Are Not Helpful

The mainstream takes a pretty dim view of doing annual “detoxes.”  Obviously I talked before about the detox diets that we have done, and have recommended them to others.

But here’s a key point: if you are going to do a detox or a cleanse for a few days, and then start eating junk food again (SAD, or Standard American Diet), it really is not going to do you any good.  Three days of healthy eating and helping your body is useless if you are going to fill it up with toxins again the rest of the time.

I only recommend detoxes in the context of trying to eat a healthy diet and avoiding toxins most of the time, so that your efforts aren’t wasted.  We can’t eat a perfect diet all the time and we can’t avoid all exposures to toxins, which is why cleanses can come in handy.  But they really are all but useless if you are not going to be mindful of what you do the rest of the time.

#3: Eating Super Foods is Not (Necessarily) Helping Your Health

The mainstream doesn’t much like super foods, either.  They are expensive and kind of “useless.”

The thing is, they can be.  Our contributor, Jaclyn, recently did a post on this.  Instead of eating “whatever” and trying to include a super food or two in your diet sometimes, try to eat clean, quality food — even if not ‘super’ — all the time.  This is so much more important.  Quantity over quality here, in a way!  (Quality food all the time instead of ‘super’ quality food occasionally.)

I promise if you eat junk food then fill up on chlorella once a month, you are not doing your body any favors.

#4: Natural Does Not Equal Safe

This is probably the biggest issue the mainstream screams about — and they’re right.  Harmful bacteria is natural.  Many types of poison are natural.  And we know those things are harmful to us.

Of course, that’s been taken to a ridiculous level.  Nobody thinks poison is safe just because it’s natural.  But many people do think that any herb, or eschewing certain forms of medical care, are safe because they are natural.  This is not necessarily true.

Herbs and natural remedies, as well as the avoidance of certain medical procedures (in some cases) can be harmful.  There are contraindications to take into account.  Do not assume that just because something’s natural, it’s safe!!  Certain herbal remedies can actually cause miscarriage or otherwise harm you if used inappropriately.  Be cautious, be smart, and don’t fall into the ‘natural is safe’ trap.

#5: Not All Natural Things Work

A lot of the mainstream says that natural remedies just don’t work.  While that’s clearly not always true, it can be.

There are certain treatments that are kind of ‘out there’ that might do absolutely nothing for your health — make sure you do some research before choosing anything.  Plus, everyone’s body chemistry is different, and a remedy that works well for others may not work for you at all.  This is true for both natural and conventional medicine, by the way.

Check into the treatments you want to use carefully.  Make sure there is evidence that they work, somewhere.  Don’t assume it will just because it is natural.  Which brings me to the next point….

#6: Science and Research is Important

Science and research are actually still important — something the mainstream talks about all the time.  Evidence-based medicine!

The thing is, there is overwhelming evidence for some natural treatments.  And there’s little to no evidence for others.  While this isn’t the defining method of knowing what works and what doesn’t (some things haven’t been properly studied, but this doesn’t mean they don’t work), it is important.  We should look for natural treatments that have been shown to be safe and effective.  We should also know when not to use them, or when something more is needed.

#7: There is a Time and a Place for Medicine

…when something more is needed.  Yes, this happens.  As the mainstream says, doctors and medicine are not evil.  They intend to help.

Sometimes, a situation exists that requires a doctor and intervention.  If someone is seriously injured.  If they are having trouble breathing.  If they have a serious infection.  There are times and places for doctors!  Not as often as some think, but there is definitely a need.  When in doubt, ask a medical professional for help.  If it turns out it’s really not serious, then go home and treat it with whatever you want.  If it is, then you have that professional helping you.

#8: You Should Trust Your Doctor

The mainstream thinks that the alternative community all hate doctors, think they know better, and generally don’t trust medical professionals.  In some cases, they’re kind of right.

If you have a doctor and can’t trust him/her, find a different one.  The doctor-patient relationship should be a partnership.

#9: It’s Hypocritical to Complain About Toxins While Using Many of Them

I see this argument from the mainstream all the time — “So you don’t vaccinate, but you let your kid eat at McDonald’s and use store-bought shampoo?”

A lot of parents don’t do this, of course.  A lot of parents are equally concerned about any form of toxin, be it in food, medicine, or personal care products.  And you should be.  If you refuse to let your child ever take mainstream medicine but you eat at McDonald’s weekly, or you use commercial lotions and soaps, well — there’s another huge source of toxins in your child’s life.

This doesn’t mean you have to be perfect — we are all on a journey, and we need to take baby steps to eliminate things at times — but you should be aware of these issues and continue to try to do better.  If you don’t see a problem with using commercial lotions and soaps but you’d never use an antibiotic, something’s wrong.

#10: Not Everything in Life is About Health

A lot of parents get so wrapped up in the ‘natural health’ world that they start seeing everything as a possible health concern.

If someone’s child wakes up “too often” at night, or is having tantrums, they wonder if it’s because of diet or some other source of “toxins.”  And hey, maybe it is.  But maybe it isn’t.  Not every problem can be solved with better diet or decreasing toxins.  It can frustrate parents who think they know their child to hear others say “You’re wrong, you need to change ____.”  Sometimes, it is what it is, if only temporarily.

Next week, look for a follow-up article: 10 things that the mainstream has WRONG about natural health!

Do you think the mainstream is right about natural health?