10 Things the Mainstream is Wrong About Natural Health |
AD 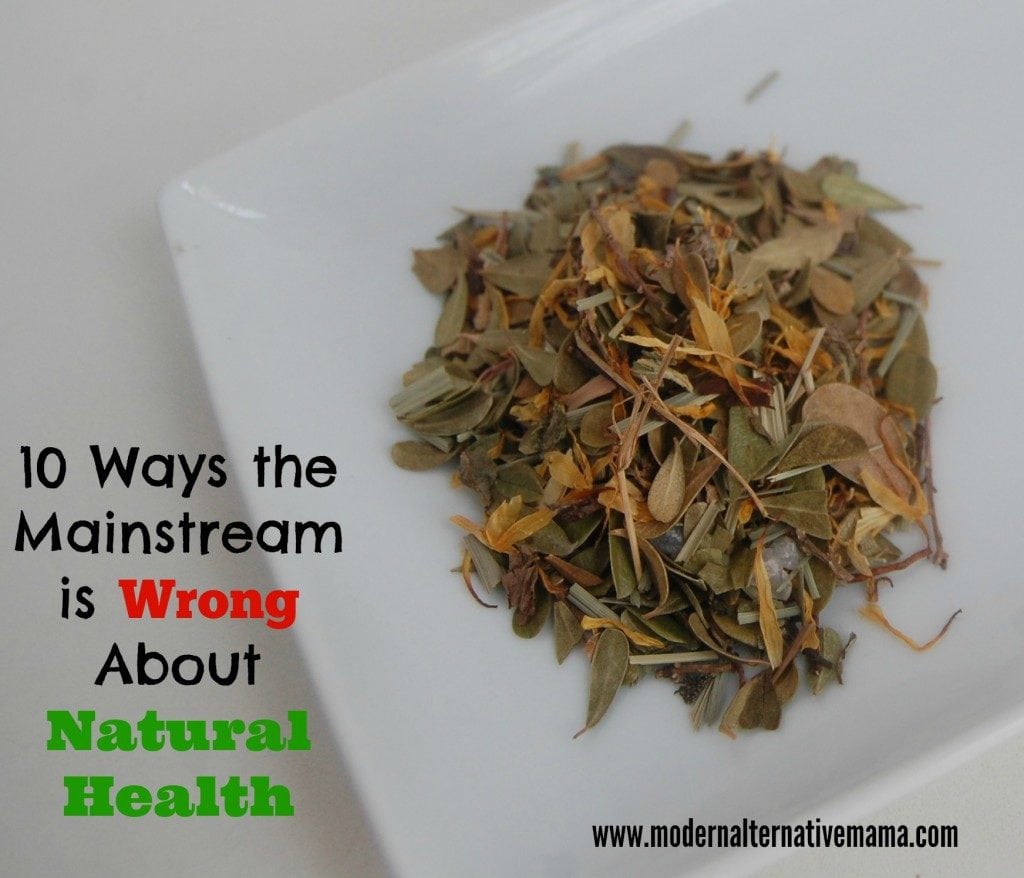 10 Things the Mainstream is Wrong About Natural Health

Last week, I wrote a post called 10 Things the Mainstream is Right About Natural Health.  I’m no lover of the mainstream, but credit where credit is due and all.  Plus, it sometimes frustrates me to see some myths passed around in the ‘alternative’ world.  Some of those not-very-true and kind of “out there” ideas are why the mainstream doesn’t trust natural health or anyone who believes in it.

All that said, though, the mainstream is still very wrong about a lot of things in natural health.  Today I’m going to highlight 10 ways.

1. All Supplements are Bad and/or Useless

The mainstream generally believes that all supplements are useless.

The thing is, that’s not true.  There are certain quality supplements that are worth taking.  Which ones are worth it depend on what your particular needs are.  Taking a handful of grocery store vitamins?  Not going to do you any good.

But real, whole foods supplements that address your particular deficiencies are definitely worth it.  I personally take gelatin, liver pills, GutPro probiotic, zinc picolinate, fermented cod liver oil, and magnesium lotion.  Your needs may vary.  All of these are top quality and have definitely helped me.  It’s all about choosing carefully.

2. Cleanses are Useless All the Time

The mainstream holds the view that because the body has its own natural detox pathways, cleanses are useless (and maybe even dangerous).

But the thing is, we deal with so many different sources of toxins in our modern world.  Food, air, personal care products, etc.  Some peoples’ bodies are also naturally less efficient at detoxing than others.  Livers, gallbladders, and other organs can become overwhelmed, sluggish, blocked.  (If you’ve struggled with gallstones, you’ve experienced this.)

In the context of an otherwise healthy diet (as much as possible) and healthy lifestyle, the semi-annual cleanse can help unblock these detox organs to allow your body to do what it does naturally, more efficiently.  I believe that this is worthwhile, especially if you are experiencing some health crisis that indicates your body isn’t functioning optimally.  Problems are fixed by addressing underlying causes, not by throwing drugs at it.

(And since I’m not a doctor, if you are really struggling with your health, find an alternative doctor who can guide you through a detox protocol and help you make some changes to your diet and lifestyle to maintain your improved health.)

3. There’s No Such Thing as “Super Foods”

To the mainstream, food is food.  It’s all about the same.  GMO is the same as non-GMO, and processed foods can be just as healthy as unprocessed.  Of course, this is untrue.  Some foods are simply healthier than others.  There are some that could be considered super foods.

Each person’s “ideal” healthy foods may be different, so there’s not necessarily a specific list of foods that are always “super,” but unprocessed, whole foods that are packed with nutrients are more “super” than, say, cheez wiz….

4. Natural Remedies are Inert AND Dangerous

This one is always hilarious!

I love it when people try to argue that remedies (usually homeopathic, but occasionally herbal) are simultaneously inert and dangerous.  “Inert” means “has no effect.”  And “dangerous” means “has a negative effect.”  So which is it?

Of course, the truth is, many herbal remedies are quite potent and very effective, if used properly.  Herbal medicine isn’t something to play around with, because it can work (and some of it could be dangerous if not used properly).  None of it is inert though.

Quite a lot of patented drugs are actually based on herbs/plants anyway.  Where do people who don’t think herbs work think that drugs originally came from?

5. Nutrition is Not Really Important

This is another common belief — that nutrition really doesn’t matter that much.  Eat food, make sure it’s not too sugary or fattening, but otherwise — meh.

This isn’t true, either.  Food that contains a lot of junky, modified, not-quite-food ingredients (like modified food starch or cellulose) isn’t nourishing and isn’t helpful to our bodies.  We require a good balance of healthy, unprocessed fat, carbs, and protein.  And we require a large amount of naturally-occurring nutrients.  Nutrition can honestly make or break you.  Nutrition is the fuel for our bodies, that helps or hinders every process!

Mainstream hospitals are often (but not always) among the worst offenders.  They often serve extremely cheap, extremely processed foods, and maintain that “eating anything is better than nothing.”  Even if the patient only wants sugary cereal for every meal.  This hinders healing!

There are tons of scientific studies showing the benefits of consuming more broccoli, blueberries, or other nourishing foods.  It’s silly to say that nutrition is not that important!

6. Evidence-Based Medicine is Only Modern Medicine

There is actually quite a lot of evidence for a hands-off approach (such as during labor and birth) or for alternative therapies (like ginger, pomegranate, and other foods and herbs).  One only needs to search for whatever alternative word you want followed by “pubmed” to see the scientific evidence for natural and alternative medicine!

Of course, some of these people ignore any evidence in favor of alternative medicine because they only want to hear about mainstream medicine.  All that other stuff is just “woo.”  (sigh.  Wrong.)

7. Modern Medicine Must Manage Everything (Intervention is Better Than Not)

There is this pervasive idea that should we have some major or minor health concern, it needs to be “managed” with modern medicine.  We commonly see:

A lot of these circumstances could be just as well “managed” with hands-off observations, changes in diet, etc.  Drugs are not necessary in many (not all) cases.  But doctors are likely to jump quickly to drugs.  It’s not all their fault — we live in a quick-fix, sue-happy culture.  But a personal relationship with patients and some advice and encouragement to make some of those diet and lifestyle changes could make a big difference for many.

Many in the mainstream believe that you should trust all doctors, though.  Because they are doctors.  Because they went to medical school and you didn’t, so therefore you are too stupid to know what you are talking about.

This is a pretty terrible attitude.  Yeah, most people didn’t go to medical school.  Yeah, doctors did.  But doctors can’t know individuals as well as they know themselves.  They can make mistakes, especially when office visits are very quick.  Doctor-patient relationships work best when each respects the other’s very important role in quality care.

Doctors who are arrogant and think that patients contribute nothing, are stupid and scared, and need to be told what to do are bad doctors.  And you shouldn’t trust them, just because they have “MD” after their name.  Trust is earned — not demanded.

9. People Who Don’t Like Medicine Use Lots of Other Toxins

I often see people say “Gee, since you’re against antibiotics, I hope you don’t eat at McDonald’s or use store-bought shampoo because those are worse!”

I agree.  So do many other parents.

This is a pretty funny idea because honestly, most parents who are concerned about one aspect of exposure to dangerous chemicals are also concerned about all those other exposures!  I don’t know too many parents who choose antibiotics very carefully and yet let their kids eat fast food on a weekly basis….  It’s just kind of silly to assume that this would be true!

People who are interested in a natural lifestyle don’t have tunnel vision.  They know there are lots of different issues and potential routes of exposure out there.  They try to avoid those too!

10. As Long as You are Functional, Your Health is Fine

This is probably the biggest lie the mainstream tells!

There are lots of people walking around now, who are “okay” on a day to day basis (they can go to work, do their usual activities, and appear fine) who in fact are not okay at all.  They have autoimmune conditions, a total lack of energy, they are very overweight, they are depressed and anxious.  They are struggling with their health.  They need help!  This is not okay.

(And no, being overweight isn’t an appearance thing — you’re a worthy person no matter what you look like.  It’s not a ‘lazy’ thing.  It’s a complicated biochemical reaction to imbalanced hormones, toxic exposures, etc. and losing weight is not at all simple.  The mainstream doesn’t acknowledge this.  They still believe if people just ate less and moved more they would lose weight.  This is a lie too.)

People who don’t feel well, who have underlying conditions, are not fine.  They are unhealthy.  They are in need of accurate information about health, so that they can feel better and experience life through energy and a sense of well-being!  It doesn’t have to be that way.  It really doesn’t.  (Stick around here and we’ll help you — click that little ‘subscribe’ button in the sidebar so you don’t miss anything!) While I have you, I want to tell you about my next book, coming out on August 19th!

It’s called Healing with God’s Earthly Gifts: Natural and Herbal Remedies.  If you bought the Ultimate Homemaking Bundle last spring, you already have a copy. 🙂  If not, this is your chance to grab one!

If you’re new to alternative medicine and just don’t know where to start, I’ll teach you.  HGEG (as I like to call it for short) walks you through the basic preparation methods for remedies, shares my top 10 herbs and why I like them, has a chart of more than 30 symptoms and which herb(s) can help them, plus 25 recipes for home remedies — that cover almost any condition!

We’ll be starting the launch festivities a week or so before the official launch, and they’ll last through August 25th.  You’ll have opportunities to win prizes, get bonuses, and even “unlock” special extra information.  More details to come on Friday.

In what ways do you think that the mainstream is wrong about natural health?