How to Make Perpetual Broth in Your Crock Pot |
AD 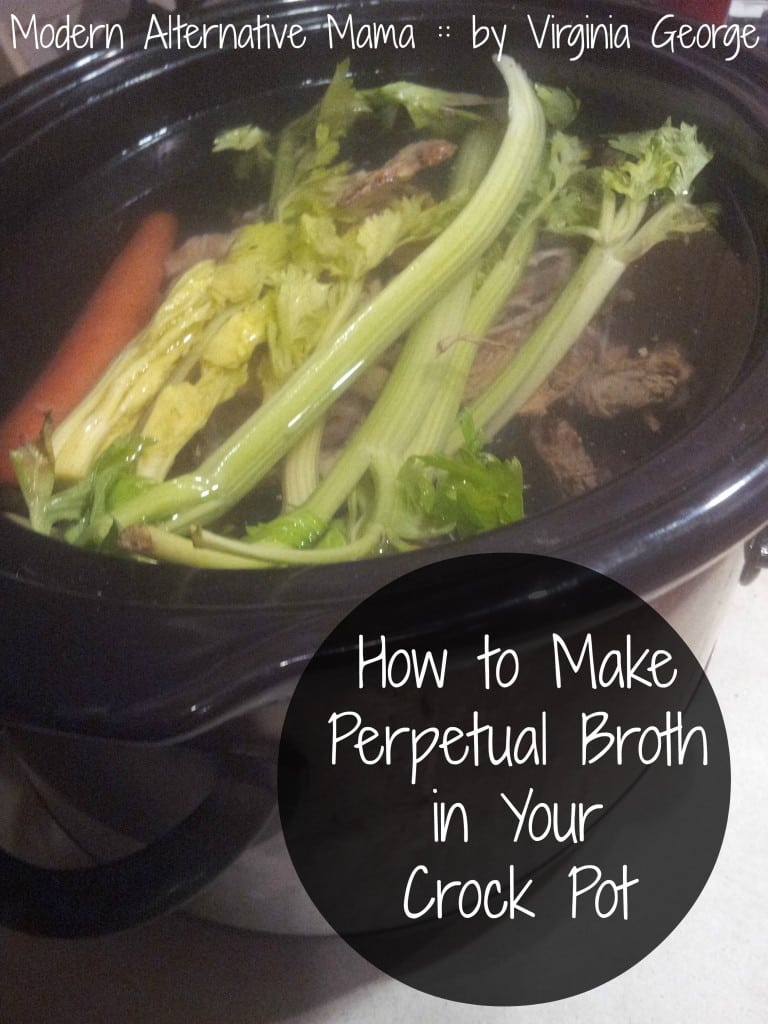 How to Make Perpetual Broth in Your Crock Pot

I wish I could say that perpetual broth was my idea because it’s brilliant. When you remove liquid from your slow cooker to drink, make soup, or cook your rice in, simply replace it with filtered water. Continue in this manner for a week or so, bottle up what’s left in there, dispose of the bones, and start again. I’ll detail the process further below.

Making your own bone broth is beyond thrifty, it’s plain ‘ol cheap. But why? What is the benefit to cooking bones for hours, especially when you can use that handy powdered stuff you can keep in the cupboard?

Bone broth is a nutritional powerhouse. It contains many minerals, like calcium, phosphorus, magnesium, and potassium. It contains gelatin which is very soothing and healing to the gut. There’s some truth to the old “chicken soup” remedy.

Traditionally, bone broth is made by simmering bones at a low temperature for a long period of time. On the stovetop, typically 6-12 hours minimum. I have been making mine in the crockpot for years, and let it simmer on “warm” for 24 hours before using it.

Toxins like lead and fluoride can be concentrated in the bones, however, so it’s important to have a trusted source for your meat bones. If there is a Trader Joe’s near you, you may be able to find organic chicken drumsticks at a much cheaper price than a whole chicken. If you buy your meat directly from the farm, it’s likely you can ask for soup bones.

Chicken bones can typically be used without special preparation because the chicken was likely cooked before it was deboned. Beef, however, benefits from roasting. I just put my bones in a shallow pan and roast at 350F for 45 minutes to an hour. Then I proceed with broth making!

While there is concern about lead in bones, I read an interesting article discussing the lead levels in organic broth found in a study by Medical Hypothesis. You can read the study abstract here. Basically, while the researchers found higher levels of lead in the broth than they did in the tap water it was made with, levels still fell several points below the EPA’s allowed level in tap water. It’s just a good reminder to source your ingredients carefully.

Most people find that starting with cooked bones is best. Simply take your bones and leftover scraps of meat and place them in your slow cooker. Add some vegetables if you’d like, I typically add celery and carrot. You want to avoid any vegetables with overpowering flavors like radishes, broccoli, cauliflower, and the like. Onions may also discolor your broth, so keep that in mind if you use it. It’s a good idea to use organic vegetables for making broth, at least vegetables on the Dirty Dozen list.

I stick with carrots and celery, a couple bay leaves, and some whole peppercorns. Fill the crock with cool, filtered water and add a couple tablespoons of apple cider vinegar (ACV). This is an important step, so try not to skip it, though you can. Adding the ACV will help to draw the minerals out of the bones, so you want to let it sit for an hour or two before turning on the crockpot.

Turn the crockpot on low and let simmer for 24 hours. I find my crock pot gets warm enough to just barely boil on the “warm” setting, so after it is heated up I turn it to warm. In 24 hours you’ll have a delicious, nutritious dietary staple, far superior to the flakes in the cupboard. Each day when you go to use your broth, simply remove what you need and replace it with more filtered water. I just scoop it out and pour it through a fine mesh strainer if there are vegetables or “other” things floating around.

After a week I draw off the remaining liquid and put it in the fridge, can it in a pressure canner, or freeze for another time. Then I repeat the process.

We consume much more broth now because I don’t have to worry that I’ll run out before I have time to roast another chicken. By the end of the week, the bones fall apart at the lightest touch because all the nutrients have been taken from the bones and put into the broth. This is a way to truly get everything you can out of one meal!

Do you make your own bone broth? What is your preferred method, and do you think you might try perpetual broth?