The Flu Shot: Is It Safe Or Effective? |
AD 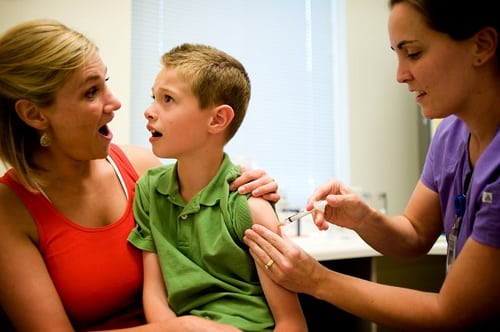 The Flu Shot: Is It Safe Or Effective? My wife and I just had a brand new baby girl.  While she was pregnant, one of the nurses at her prenatal check-up advised her to get a flu shot.  My wife, who has attended my vaccine lectures and read my vaccine articles, smiled at me then politely said “no thank you.”  Immediately after our prenatal visit, I thought it would be fun and educational to visit various pharmacies around town and ask for the package inserts for their flu vaccines.  We visited about half a dozen locations including a local hospital, Target & CVS.  Advertising for the shot is everywhere throughout these stores from the parking lot to the aisles.  Many of the stores were even offering a discount on your bill if you got the vaccine.  Judging by the puzzled faces of the pharmacists and nurses, it was obvious that no one had ever requested this information before.  In every instance, they had to dig through the trash to locate the neatly folded, unopened insert.  I painstakingly read through each insert from the various manufacturers and highlighted the statements I found most interesting.  My wife found one statement, in particular, to be the most shocking.  I will tell you what that statement is later but I first want to talk in more detail about the vaccine.

What Is The Flu Shot?

The flu shot is also known as the trivalent inactivated vaccine (TIV).  The word trivalent indicates that it contains 3 separate flu strains…2 type A strains (including subtype H1N1) and 1 type B strain.  The strains that are contained in the Northern Hemisphere flu shot are based on recommendations made by the World Health Organization (WHO) during a meeting in February using their best guess as to which strains will be most likely to circulate.  The recommendations are made so far in advance of “flu season” due to the fact that it currently takes at least 6 months for vaccine makers to produce enough vaccine for mass distribution.  The word inactivated refers to the claim that all of the viruses within the vaccine have supposedly been rendered inactive or killed. The most well known chemical used to inactivate the virus is formaldehyde.

The flu shot is given intra-muscularly or intra-dermally and, according to the CDC, is the most effective method for preventing the flu and its complications.  The vaccine manufacturers concede on their package insert that they don”t really know what level of antibody production is protective and that their may not be cross-protection against flu strains not included in the vaccine or against vaccine-strains that mutate during the year (aka antigenic drift).

Who Is The Flu Shot Recommend For?

In 2010, the CDC began recommending the flu shot every year for every person starting at 6 months of age with 2 doses given for first time recipients. Because it is presumed that high antibody levels are required for protection and the standard flu shot tends to produce lower antibody levels in people over 65 who frequently suffer more complications than younger adults, a new shot for seniors with 4x the amount of antigens (inactivated viruses) was approved by the FDA in 2009.  The CDC recommends this vaccine for seniors but admits that it doesn”t know whether it actually provides increased protection from the flu.

It is curious that the CDC has expanded its recommendation to every man, woman & child over 6 months of age, healthy or sick, given the fact that on their website they state that the “CDC does not know exactly how many people die from seasonal flu each year.”  In the states of New Jersey & Connecticut, mandates force parents to give their 6 month old infants the shot or be banned from daycare.  Health-care workers across the country are being told that they risk being fired if they don’t comply with flu-shot mandates.

How Effective Is The Vaccine?

A review of the available research published in the Lancet in Oct, 2011 showed that efficacy of the flu shot was as low as 60%.   In 2010, the Cochrane Collaboration came out with their review of the flu vaccine.  The Cochrane Collaboration is a non-profit organization made up of over 28,000 researchers from over 100 countries who organize & interpret medical literature & data.  They looked at all of the studies done on the flu vaccine for healthy people age 16-65 & concluded that the vaccine did not prevent transmission or complications from the flu & provided only a modest reduction in flu-like symptoms (12%).  They noted that they were hard pressed to find any favorable results even though many of the studies were funded by the drug companies.  They went on to emphasize there are over 200 different viruses which can cause flu & flu-like symptoms &, “[a]t best, vaccines might be effective against only influenza A & B, which represent about 10% of all circulating viruses.” This is a picture of the package insert for Flulaval.  In the bottom red box it states that “…there have been no controlled trials adequately demonstrating a decrease in influenza disease after vaccination with FLULAVAL.”  In other words, it has never been proven to be effective at preventing the flu.

This information should certainly make health-care workers stop & question the logic of flu shot mandates by their health-care facility administrators.  Firstly, if the concern of administrators were truly to protect the patients, wouldn’t they need to test the blood of every health-care worker post-vaccination to ensure that they had developed “adequate” antibody levels?  More importantly, if these administrators took the time to look at the data, they would see it shows that the vaccine does not prevent transmission of or complications from the flu.  Mandating time in the sun or handing out bottles of vitamin D3 would work far better at preventing the flu in their employees & transmission to patients.

I can not count the number of kids, parents, health-care workers & military personnel who have told me that they came down with flu-like symptoms following the flu shot.  Doctors will contest these claims & say that it is not possible that the flu shot causes the flu.  Theoretically this is true if all of the flu viruses in the vaccine are killed, however, this can not be guaranteed.  Assuming they are killed, does it really make a difference to the individual whether they are experiencing flu symptoms from the flu or flu-like symptoms from the vaccine?  The package insert for Fluarix states that symptoms of influenza-like illness was more than triple in the vaccinated subjects vs the placebo group (1.6% vs .5%).

How Safe Is The Vaccine?

Many of the flu vaccines contain mercury which is a known neurotoxin.  Those that don’t contain mercury still contain other toxic ingredients including formaldehyde & polysorbate 80 which are known carcinogens (cancer causing agents).  Guillain-Barre syndrome, a neurological illness that results in paralysis, is a known complication of the vaccine.  Stevens-Johnson syndrome, a condition where the skin literally melts or burns away, is also listed on the package inserts as a one of the many adverse events reported following vaccination.

Perhaps even more disturbing are the unknown vaccine ingredients.  Most of the flu vaccines are cultured in eggs.  These eggs are from diseased chickens found in confined animal feeding operations. The vaccines have supposedly been filtered & purified, however, you only have to read about the history of the polio vaccine contaminated with Simian Virus 40 (SV-40) & its link to cancer in humans to understand my skepticism. More recently, in 2010 the rotavirus vaccines, Rotarix and RotaTeq, were found to be contaminated with whole porcine circovirus as well as porcine circovirus DNA.  The potential damage from these types of contaminants is very real.

In another published in Sep, 2012 in the Toxicology & Environmental Chemistry Journal, data demonstrated that mercury (Hg) exposures in the mother, especially in the first trimester, resulted in fetal mercury exposures in-utero via the placenta which produced severe neurological damage & death.

Which statement, which was found on every package insert, did my wife find most shocking?  “Safety & effectiveness have not been established in pregnant women or nursing mothers.”  Looks like this population will be the guinea pigs. How many informed mothers are willing to take that risk?

What Is Your Opinion Of The Flu Shot?