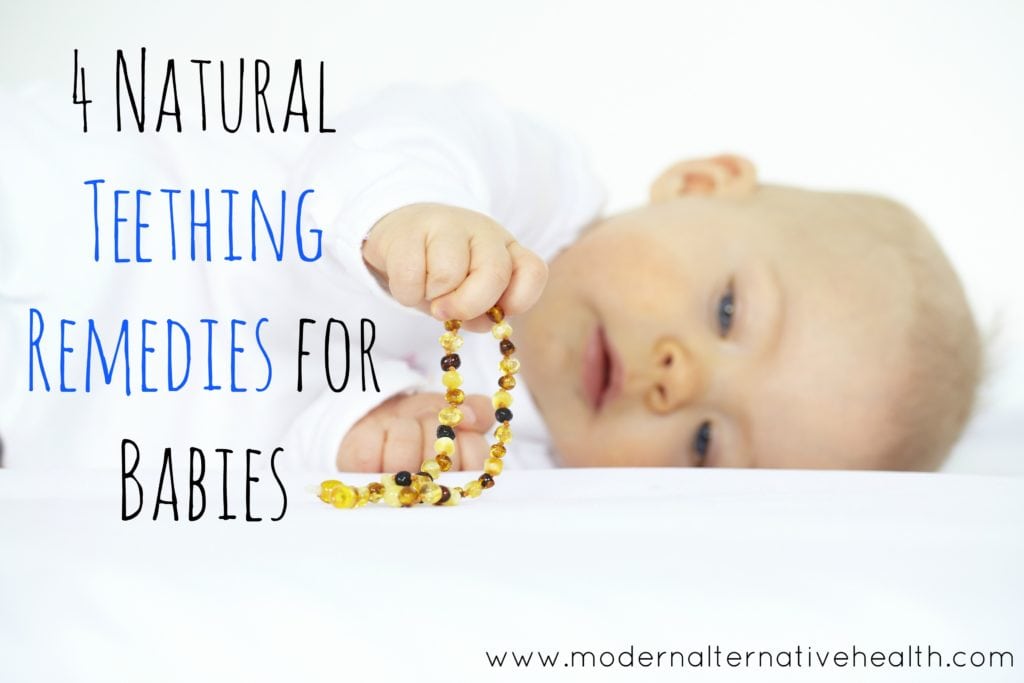 Or so I think, given that he’s 7 1/2 months old and has yet to pop one through.  Bekah got her first at 5  1/2 months, and Daniel, at 6 months.  So this whole “no teeth past 7 months” thing is new to me.  He loves to gum on big chunks of frozen fruit (really the only food he’s yet enthusiastic for…and he doesn’t actually eat much of it anyway), of course, he likes to bite me.  But that’s the age, too — he also likes to pinch me and pull my hair and give me kisses and screeches if anyone else is holding him and I walk by and don’t immediately pick him up.

Teething’s not so fun, for moms or babies.  Babies are irritable and they chew and drool and scream, and sometimes they don’t sleep.  This makes for a very tired and stressed-out mommy.  How can we help them…without resorting to Tylenol?

I’ll be honest.  I was very hesitant and waited until my oldest was six months old, but I did give her Tylenol.  In fact, not knowing any better, I gave it to her a lot from around 8 months until 13 months (she got something like 12 or 16 teeth, a couple of colds, and some other stuff that made for a very difficult time).  We found out when she was 19 months that her glutathione (an amino acid that is critical to immune function) was seriously depleted.  She was speech delayed.  In fact, she lost some words after a year.  Tylenol depletes glutathione.  Was it related?  Well…it’s likely it was at least partly caused by Tylenol.

Anyway, OTC drugs of any kind are not benign, even if they are marketed to babies.  Tylenol and even ibuprofen are so ubiquitous that we don’t even think about it anymore — I mean, you have to have those things on hand, right?  Just in case?  If not for teething, then for fevers (but don’t do that!  Fevers are beneficial to the body and shouldn’t be artificially lowered).

All of these pain-relieving drugs come with a side effect of depleting glutathione and lowering immune function.  They also come with the possibility of liver damage in case of overdose.  It is so, so easy to overdose a baby.  If you give more than one medication, or you forget when you last gave it, or the other parent gets up with the baby and doesn’t know you gave it recently, or you read the instructions on the bottle wrong, or you don’t know your baby’s accurate weight….  You get the idea.  So easy to overdose a baby.  Since Tylenol is the leading cause of liver failure, this is no small issue.

Skip the OTC drugs.  There are other ways.

Last week, Jacob was waking every 15 minutes, crying, and there was no obvious reason for it.  He wasn’t wet, he wasn’t hungry, he wasn’t hot.  The only thing I could think was that his teeth were bothering him — that he was feeling achy.  The big kids had hidden the teething tablets (you would think I’d learn to keep them put away, but no) so we didn’t have any.  I took a quick trip to Walmart, and then Target (Walmart was out) at 10 PM at night.  Then I made the mistake of telling everyone on Facebook they would guarantee us a better night’s rest.

Never say such a thing.

Of course, he proved me wrong, continuing to wake and require multiple feedings, rockings, and diaper changes, plus peeing through his clothing and on me and the bed.  The only sound sleep he got was after I stripped him and laid him in his bed in just a diaper.

Anyway, teething tablets, on other occasions, have been a lifesaver.  They are a homeopathic product by Hyland’s, and they contain a variety of remedies which reduce swelling and achiness and help the baby sleep.  They usually don’t have any side effects.  They also come in a quick-dissolve little tablet, which is really nice for the little ones.  I have used them for all my babies successfully.

Some say that Hyland’s is not the best choice because in true homeopathy, the one proper remedy is chosen — the remedies are not mixed.  If the remedy doesn’t work, it’s because it is not the right one for that particular person.  I believe this.  I only choose the Hyland’s when the babies are little because of the quick-dissolve aspect.  Others say you really ought to be giving the little pills dissolved and succussed (shaken) in water anyway so that doesn’t matter.  I am not an expert on homeopathy.  This is about the extent of what I know.

Other homeopathic (single remedy) solutions are:

I used chamomilla successfully with Bekah; Daniel didn’t respond to it, so I chose belladonna, which worked for him.  These remedies can be used in place of OTC drugs.

I ultimately stopped using teething tablets for Jacob and did not use them for my later babies, because they caused Jacob to be very wakeful and unable to sleep.  Instead, I used some of the remedies below, which have worked for all three of my younger babies.

Another really awesome and completely natural way to help teething pain is with an amber necklace.  They aren’t for chewing on, they are simply for wearing.

This sounds ridiculous, but it’s not.  Real Baltic amber contains something called succinic acid.  It is a natural pain reliever.  When the necklace is worn against the skin, the amber is heated and the acid absorbs into the skin, reducing pain and inflammation.  Adults also use them to relieve tension in the jaw, teeth grinding, and other oral pain, very successfully.

Both of my boys have used these amber necklaces.  When they weren’t wearing them, we heard about it!

Make sure to buy necklaces that are the appropriate length (it will say ‘made for adults’ or ‘made for babies’ usually).  Babies’ necklaces are very short.  They should have knots tied between every bead.  The clasp should be a screw-together clasp.  There shouldn’t be any way that baby can break the necklace and get all the beads off (hence the knots between each).  They can be safely worn 24/7, which most babies do.  The official instructions say babies should be supervised while wearing them, but of course, babies are irritable at night, so…most of them wear the necklaces all the time.

This option, I developed later, when Jacob was a year old and nothing was working for him anymore.  It’s a combination of cloves and catnip, prepared as a tea (which works well for toddlers who can drink from sippy cups) or a tincture (which is travel-friendly, prepared ahead of time, and works well for younger babies).  This is the single remedy I have used for my younger two babies because it works every time and there are no side effects.

Want to try a tincture but not ready to make it yourself? You can buy it from us over at Earthley!

Recently I posted a recipe for a homemade teething cream.  If you’re worried about the clove oil, try steeping 1 tbsp. whole cloves in the oil and straining it instead.

Using a combination of these, most babies are relieved of most of their teething pain.  For Jacob, I put an amber necklace on him all the time, offer teething tablets if he’s especially fussy or irritable, and let him chew on frozen fruit slices here and there (he’s starting to really like that).

What are your favorite teething remedies?