How the Immune System Works |
AD 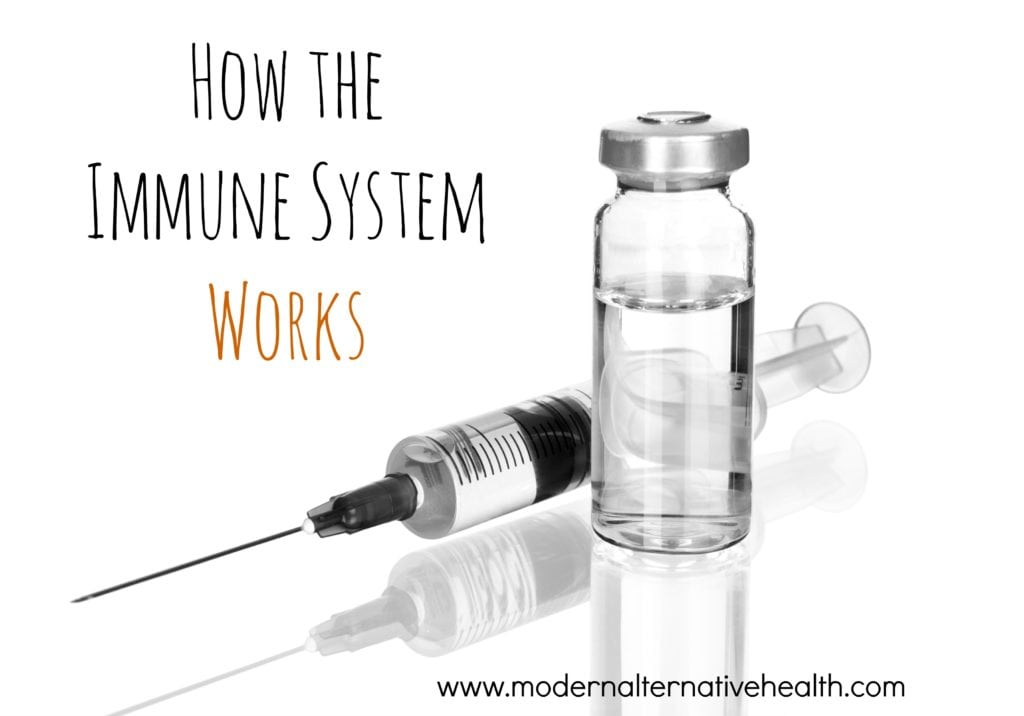 How the Immune System Works

Welcome to my series on vaccines!  This is the fifth post in the series.  You may have missed Getting Serious, 10 Bad Reasons Not to Vaccinate, Why “Science” Should Be Carefully Evaluated, or What is Herd Immunity All About if you’re new here.

Isn’t that what this entire debate is really about?  Vaccine proponents say that vaccines are good for the immune system, because they train the body to respond to the threat of illness by giving a mild version of a disease, so that should the body encounter that disease in real life, it already has antibodies to fight it off.

Vaccine detractors say it doesn’t work that way because the immune system is more complicated than that.

Today we’re going to look at how the immune system actually works — the different parts of the immune system, how they work together, what happens when an illness threatens us, etc.  It’s important to understand, as much as possible, how your body functions before you make a decision about which health interventions, if any, to use!

What We Are Told About the Immune System

The immune system is this amorphous “thing” that keeps us from getting sick, or helps us to get over a disease if we do get sick.  It’s not that obvious what it is, because it’s not one organ or a series of organs, like your heart or nervous system.  There’s a reason for this — doctors don’t fully understand the mechanisms of the immune system yet, and what they do understand is rather complex.

We know about antibodies and white blood cells.  We know these attack germs and kill them so we don’t get sick.  But much beyond that…we don’t really know.  Since the immune system is this big mysterious thing, though, it’s easy to get confused about what will best help it.  And that puts us at an extreme disadvantage when we’re trying to evaluate which vaccines, if any, are a good idea.

Immunity In Your Gut?

In recent years, we’ve heard a fact along these lines: “80% of your immune system is in your gut.”  With this has come confusing recommendations to consume probiotics (without explanation of what probiotics are or what they do — we only hear vague notions of how they’re found in yogurt and they’ll regulate our bowels).

But what does this really mean, that your immune system is in your gut?  And is it true?

Your intestines are lined with many different species of beneficial bacteria (and some yeasts).  In fact, about 2 – 3 lbs. of your total body weight is found in these bacteria.  Considering how small they are, that’s a lot — estimates are around 100 trillion organisms per person.  These bacteria help break down your food, absorb vitamins and minerals, and also to fight off any “bad” bacteria that might get into your system.

Right now, scientists know very little about the bacteria in our guts.  They discovered only last year that there are three distinctive types of “ecosystems” within the gut (each comprised of many different strains, but with one family of bacteria most dominant).  Each ecosystem had both a food preference and that they produced different types of vitamins and enzymes (which benefits the person).  Early research shows that these different ecosystems aren’t related to race, ethnicity, sex, age, or current health, which of course begs the question, why is each person the specific type that they are, and is one more desirable than another?  Currently the best answer is “we don’t know.”

What we do know is from studying the biological norm (vaginally born, breastfed infants) vs. other conditions (c-section, formula fed).  Vaginally born infants are colonized from their mother’s flora and are dominant in E. Coli (yes, really), bifidobacterium, enterococcus, and lactobacillus.  C-section infants are colonized from what is in the OR and on the tools and this has been shown to be clostridium and streptoccocus.  Note that there is no overlap in strains.

In breastfed infants, bifidobacterium remains the primary strain of gut flora, and this strain shows a protective effect against infection, especially diarrhea.  Formula-fed infants have a much more diverse gut flora with a large amount of bacteriodes and some bifidobacterium, and also clostridium and streptoccocus.  The low amount of bifidobacterium leaves them more vulnerable to infections.

So, we know that bifidobacterium is extremely protective in immune function.  There are three major strains in breastfed infants: B. infantis (unique to breastfed babies), b. breve, and b. longum.  These strains also work together with lactobaccillus strains to rid the body of pathogenic bacteria.  Lactobaccillus acidophilus is partially responsible for keeping the pathogenic H. pylori at bay (which is responsible for ulcers and other stomach ailments).

E. Coli bacteria (some strains, anyway) is actually critical to baby’s health.  Breastmilk suppresses most strains (including the pathogenic and infamous 0157:H7 that causes illness, usually from tainted meat), but one in particular produces IgA in response to breastmilk, which lends a protective effect to the baby’s immature gut.  This is a critical part of gut development.

Bacteroides, which are present in everyone, are extremely important.  Bifidobacterium increases what the bacteroides can do in the body (making them able to gain nourishment from many different types of foods).  The bacteroides play a huge role in immune response.  One known strain is responsible for strengthening T cells, which help fight “bad” bacteria.  A large part of your immune system is found here — in the bacteroides and everything that they support.

We can tell from this that regardless of what other types of bacteria are present in the gut (because it does diversify as we eat a varied diet), bifidobacterium, lactobaccillus, and bacteroides are important keys to health.

The bacteria is in precarious balance.  We would have to study how vaccines affect the flora — do they do so positively or negatively?  At this time, the answer is largely “we don’t know,” because it has not been studied.  This is definitely an area that warrants further study, to answer this important question.  It also warrants caution when approaching vaccines since it is a major hole in research. What The Gut Does in the Body

I had originally planned to write a much more detailed explanation of exactly what happens in the body — all about the TH1, TH2, TH17, humoral vs. cell-mediated immunity, and so on.

Then I ran into tons of conflicting information, cytokines, interferon, and lots of other terms that made me want to slam my head against the wall.  I tried.  I read medical journals for days.  The truth is, I don’t and can’t fully understand it after a few hours of research.  I suppose that means that according to some, I shouldn’t have an opinion on vaccines since I can’t even understand how the immune system works completely.

I’m not an immunologist and neither are most other parents.  I did notice something interesting, though.  When the medical journals were describing various processes or functions, there was a decent amount of “we don’t know why this works the way it does.”  i.e. even the immunologists don’t fully understand the immune system.

Basically it sort of goes like this…when there is a threat to the body, the leukocytes (white blood cells) attack the threat and try to kill it.  Some of these are motivated by that gut bacteria we talked about already.  The system is extremely intricate and we don’t know even half of what’s happening.  These white blood cells have a type of “memory,” in that if a threat occurs that has occurred before, the body is usually able to get rid of it faster and more easily.  Antibodies from previous exposure to the illness stay in your system to help this process along.

I even found that scientists have only recently discovered the function of the appendix: they believe it harbors a colony of good bacteria at the top of the gut, and that after an illness, this “hideaway” bacteria re-seeds the gut.  Isn’t that fascinating?  And this is something they only discovered a few years ago.  (They also think its function isn’t “necessary” in today’s day and age when we don’t have the same contaminated food and water and other serious immune challenges.  Given the state of peoples’ gut health and related autoimmune conditions, I think this assessment is foolish.)

What Do Vaccines Have to Do With It?

The truth is, because we have a relatively basic understanding of the immune system, and cannot possibly understand all the potential ramifications of messing with it, why are we doing so?

We understand the function of illness — that when we are exposed to an illness, we produce antibodies to fight that illness.  We’ve understood that for a long time and it’s why we create vaccines for so many things.  Vaccines are intended to “trick” the body so that either we don’t get sick (or succumb to other things — they’re trying to create vaccines for substance abuse and cancer now, too) or we get a mild illness.

There’s some evidence to suggest that illness may be beneficial, though (acute illness).  Each illness “trains” the immune system how to appropriately handle challenges, and it also “renews” the body by burning off or otherwise getting rid of toxins through symptoms.  Each illness is a natural detox, of sorts.  Is it wise to mess with this function by suppressing illness?

There are a lot of unanswered questions here — including if vaccines really are a benefit to the immune system at all.

Finally, when discussing the immune system, I would be remiss if I didn’t mention the difference between symptoms and disease.

A disease is the reason that you are sick — the underlying cause, whether that’s bacterial, fungal, or otherwise.  Gut flora can be out of balance, or you could catch the chicken pox.  This is “disease.”

Symptoms are the body’s attempt to rid itself of whatever’s causing the disease.  Symptoms tell you that you are sick, but they are beneficial to you — they are your body’s way of clearing the junk.  Fevers kill invaders.  Vomiting, extra mucus, or diarrhea flush it out of your system through various excretory systems.  These symptoms aren’t the disease itself; they are produced by the disease.  When we stop the symptoms, we stop the body’s method of clearing itself of an ailment.  Messing with the body’s natural elimination and detoxification processes is a serious and unwise thing to do.

At the end of the series, we’ll talk more indepth about how to boost the immune system and help keep unvaccinated kids healthy.

What do you think about all this?  Do you think vaccines affect the immune system positively or negatively overall?