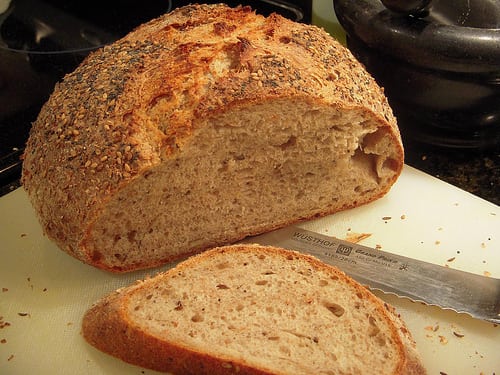 My starter is still alive!

That’s one thing to be thankful for.  I haven’t ruined my starter yet.  But more than that, it’s becoming increasingly active.  I finally did a little actual research, and figured some things out.  Maybe you’ll be smarter than I was and take my advice without having to do it the wrong way first. I always do that…it drives my husband nuts.  He says I never take advice from anyone and I am determined to learn the hard way.

With my sourdough wasn’t any different.  But now I have learned exactly why I should have followed the directions in the first place.  All of these “extra” steps seemed stupid and pointless, but once I learned why they’re done, well, they seemed pretty important.  This exact thing happened when I learned to sew, too.  I ignored instructions, only to figure out once I was more experienced why I should have just done it the way I was told.  Sigh.

I digress.  Let me explain to you what I have learned now….

I watched this neat video at GNOWFGLINS explaining why sourdough works and what happens.  Go watch it yourself — it’s worth it.  But to summarize, wheat has naturally occurring bacteria and yeasts, and there’s lots in the air too.  The flour gets mixed with water and the bacteria and yeasts begin to eat the gluten and other parts of the flour, producing carbon dioxide and rising the dough.  The organisms double rapidly, and your goal is to create a healthy colony of organisms.  Regular feedings provide new “stuff” for the organisms to eat.

So, remember when I learned my lesson about stirring in your hooch?  I was pouring off a lot my “good” bacteria and yeasts in a brand new starter, which ruined it.

I have also read directions that say to pour off half the starter and transfer it to a new jar each time you feed it.  I ignored this because, really, why would you waste starter like that?

Ahem, I found out why.

When the starter is brand new, the organisms aren’t very concentrated (even though they multiply rapidly).  They aren’t strong enough to rise a large volume of starter — which is what you will get if you just keep feeding it and don’t dump any out.  It’s important, at least in the early days (up to two weeks, according to Wardeh) to remove half the starter and keep only a small volume.  Once the starter is very active — defined as doubling its volume in 12 hours or less after each feeding — then you can start using it regularly and not dumping any.  An established starter does not need to be dumped at feedings, but a new one does.

As for changing to a new jar, I have found that it is easier to track how well the dough was rising if the jar was clean.  If I fed the starter at night, I would usually miss the rising action and see just little bubbles throughout in the morning, indicating that it had risen.  In a clean jar, there would be a little line around the area where the starter had risen to.  This way, I could tell if it was really rising high enough.  It’s not necessary, but it’s easier.  The jars are also easier to clean if they don’t have crusted starter all around the sides.

I have successfully used the starter to make sourdough pancakes (which, sadly, I did not like — only Daniel did, but he loves all things sour) and English muffins.  We enjoyed the muffins but found them a little gummy.  Wardeh said I needed to add a bit more flour and cook them a little longer, and I’m sure a more active starter would have helped matters too.  Once I get the hang of it, the English muffins will probably become a regular breakfast option around here, paired with some bacon and a smoothie.

I plan to keep attempting these little projects for a few more weeks until my starter is several weeks old and very active.  Then I really want to try these sourdough bagels that Cheeseslave posted.  And once my starter’s really active, I plan to try a boule again, using Wardeh’s recipe.

I’m glad I’ve learned all I have, and that I’m getting my starter going well, so that I can include well-prepared grains in my home!

I’m making yogurt again, milk kefir, and even got some water kefir going now!  Definitely fermenting more. 🙂  I found this neat basic tutorial on fermenting vegetables, and it’s almost enough to inspire me to try fermenting some of those soon too.  Maybe.  haha.

How’s your sourdough going?  Have you baked anything good yet?