How to Make Chicken Stock |
AD 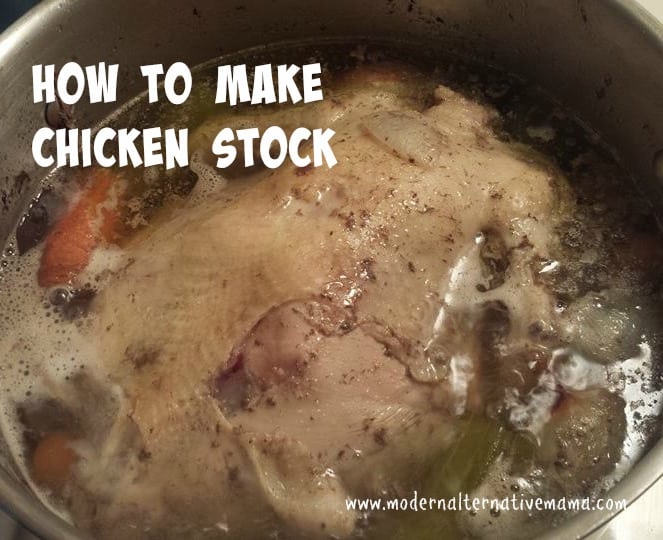 How to Make Chicken Stock

As I was looking back through my archives and working to make some changes to the site a few weeks ago, I realized I had never posted on how to make chicken stock.  I can’t believe that!  It’s such a basic food, and a staple in any real food kitchen.  I constantly have several ice cube trays and big bowls of it around.  I have a pot on the stove right now!  Yet, I’ve never posted on it.  Seems weird.

Anyway, that’s the reason for today’s post!  Homemade stock is amazing stuff.  It’s full of gelatin and calcium and lots of different nutrients.  It actually soothes and heals the digestive system (which is why it’s so key on GAPS).  It’s not an old wives’ tale that good stock can heal illnesses!  If you have a cold, please do eat chicken soup!  It’s gotten to where I don’t even want soup from anywhere but home, because I know it just doesn’t have the same amazing properties (in fact, it’s pretty much junk; it’s a tiny bit of stock mixed with MSG and other yucky stuff).

Pay attention: unless you are lucky and have a farmer who makes it and sells it like I do (at the crazy expensive price of $3.50 a quart!), you cannot buy this (bouillon cubes are filled with MSG, do not buy them!  Store-bought “organic broth” isn’t ideal either because it isn’t made from bones and it doesn’t gel)!  And even if you can, do you want to pay those prices?  We go through a gallon or more a week, so I don’t.

I can make over a gallon of stock very cheaply.  Free if you want to consider that we eat the meat and I’m using just veggie scraps; parts most people just throw away anyway.  Who can pass that up?!  Excellent nutrition for free?  And it’s quite easy.  It requires only a few minutes to start, lots of “ignore” time, and a few minutes to cool and put it away. Now. To make it. This could not be easier.

First, take your chicken carcass (after eating the yummy roast chicken and picking it mostly clean; I often leave some back meat on) and dump it in the pot.  Or, your stewing hen.  It can be frozen still, it doesn’t matter. Now, add your feet!  (I like them and always have them around.  Maybe that’s why my stock always gels so nicely.) Then, add some onion and celery and carrots or scraps.  I had half an onion left from cooking so I’m using that.  I also had the remnants of a bunch of celery that was not good for much else. Now, fill up your pot with water.  I used to use tap water, but now use water from my Berkey filter, which is recommended (some sort of filtered water).  Do what you have to.  Make sure the water covers the bones.

Move it carefully to your stove.  This is a good chore for a husband!  I did it myself this time, but other times I might use my 8-cup blender and fill it with water several times and dump it into the pot already on the stove.  A little more work, but then I don’t have to lift it when it’s full.

Turn it on low-medium now.  Know your stove — I have one burner that basically doesn’t cook unless it’s on at least medium-high, so that gets turned…well, on medium-high.  But generally you want it lower.  The stock shouldn’t boil, ever.  It should just simmer very gently, and it needs to heat slowly.  It will turn a funny white color and won’t taste very nice if you boil it.

You can also do this in your crockpot.  This is generally how I make stock now, unless I am going to be home to babysit it. That’s done!  Let it cool a bit, then strain it into containers.  I like to put it in mason jars to store.  And don’t skim off all that lovely fat, you want that in there!  (But don’t make the mistake I once did of drinking a whole glass of stock with tons of fat and sea salt, it will cause die-off and you will be miserable….)

It’s also a good idea to do some in ice cube trays, so that you can pop out just a few cubes at once to make a sauce or gravy, heat for a quick drink (not in the microwave, please!), thin baby food, or whatever.  I usually do both.

And that’s it!  If you had a lot of bones, you can go ahead and fill the pot up again and use the same bones for a second batch.  I often do this, occasionally adding a few extra feet.  Your second batch won’t be as rich and gelled as your first, but it will still make good soup.  Some people even do a third batch. Have you ever made chicken stock?