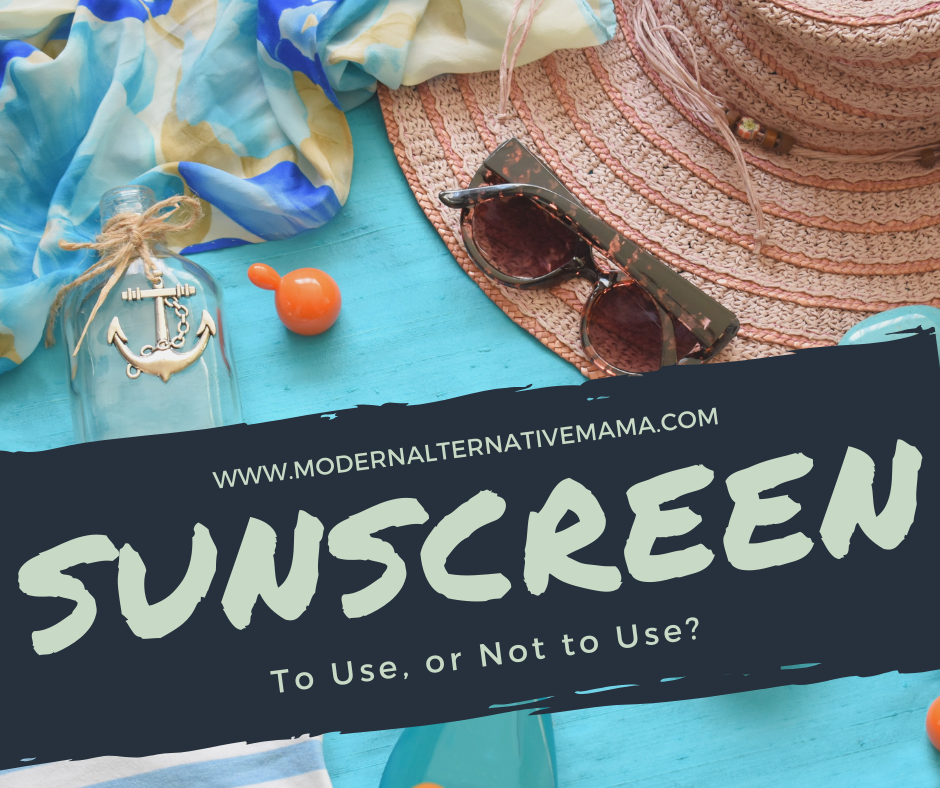 Sunscreen: To Use, or Not to Use?

Now that it’s getting warm outside (which is super awesome!), if you happen to find yourself in the middle of any given group of mothers, you’ll find them obsessively slathering their little ones with sunscreen before they go out to play.  After all…we wouldn’t want them to get any sunburns!

I would not be one of those mothers, however.

So far we’ve gone to the zoo three times and the park several and have spent several hours in a row outside many days in a row.  I’ve gotten a little color here and there.  But my kids?  Nothing.  No tans, no burns at all.  And that’s being outside in the middle of the day, full sun, whenever possible.  And NO sunscreen.

Worries About Sunburns and Skin Cancer

It’s true: these days, rates of skin cancer are through the roof.  Experts blame too much sun exposure and suggest using more sunscreen.  In fact, they point to tanning, repeated sunburns, and overall sun exposure as the primary causes of cancer.  Some suggest putting sunscreen on every single morning as part of your beauty routine, and to never even walk to the mailbox without it.

Then WHY are skin cancer rates much higher among people who work 40 hours a week in office jobs than in people who are lifeguards?  Why did people who worked 12-hour days in the fields 100 years ago not get skin cancer?  Why was sun exposure really not a problem — until now?

Some say it’s the hole in the ozone layer, but that just doesn’t add up, considering it’s not located over the area in which most of us live.  According to the CDC, some of the states with highest skin cancer rates are Connecticut, Vermont, Colorado, Washington state, Oregon…some of the states with least sun exposure (based on seasonal temperature shifts).  Comparatively, Florida, Texas, New Mexico, Mississippi and others had relatively low rates of sun exposure, despite having moderate temperatures year around, allowing people more sun exposure.

On the other hand, as we’ve used more and more sunscreen, vitamin D deficiency has increased sharply.  (So have cancer rates in general, by the way.)  Some children are actually getting Ricketts again, a disease in which bones are weak from a lack of vitamin D and actually begin to bend.

For this reason, the AAP increased the recommended vitamin D amount per day from 200 IU to 400 IU for children about a year ago.  Of course, the best source of vitamin D, and the safest, is the sun — not any supplement.  Most people in this country are vitamin D deficient now.  Ideal levels are around 60 – 80 ng/mL, but many people now are only in the 20 – 30 ng/mL range, some even lower.

Ricketts isn’t the only concern.  Osteoporosis, all forms of cancer, and generally lowered immune system (meaning more colds, flus, etc.) are also related to insufficient vitamin D.  Low levels of vitamin D are why people are sick more in the winter, when they are not exposed to sunlight very often.

It’s also interesting to note that even the AAP acknowledges that sunscreen “prevents the formation of vitamin D in the skin.”  So if you are taking your children outside frequently but always using sunscreen, they are not getting any vitamin D!  (But ignore the part about sun causing cancer, they have no evidence of that, nor do they provide any links to studies!)

What’s in sunscreen, anyway?  Here is a list of ingredients in popular brands:

The sunscreen ingredients that are used to absorb UVA radiation include:

So what’s the problem?  Many of these ingredients are known to cause cancer.  Your skin is a big sponge, and anything you put on it is going to be absorbed right into your body.  These chemicals have been shown to cause all forms of dysfunction in your cells.

Sunscreens have also been linked to increases in asthma, allergies, and ADHD.  The Environmental Working Group completed a study about sunscreen safety and found that many were absorbed into the skin, didn’t protect, contained harmful chemicals, or otherwise weren’t what they were supposed to be — 84% of them!

Sometimes, you will be outside all day, and there’s the possibility you will get burned just from sheer length of exposure.  The best idea is to stay outside only until you begin to turn light pink, then go inside.  However, what if you’re at a beach vacation or another special event?  In these cases, some sun protection is warranted.

Long, loose clothing and hats with wide brims are a good idea to protect against the sun without any chemicals.  Coconut oil, aloe vera, and certain essential oils or plant compounds have been shown to help protect your skin from the sun. A note of caution, a lot of essential oils increase photo sensitivity, or sun sensitivity, and can cause sunburn, so don’t use one without plenty of research and/or consulting a professional.  If you need a sunscreen, there are some better options.

The safest sunscreen brands are UV Natural #1 (according to EWG), and Badger (from my experience).  Although I have not used any sunscreen myself in several years nor ever on my children, I do own Badger brand.  Its active ingredient is only zinc oxide, which is completely safe, and its inactive ingredients are okay too.

Some say that titanium dioxide is also safe (Burt’s Bees brand contains both this and zinc oxide as active ingredients).  These creams produce a barrier against the sun and are thicker, greasier, and often show up as white on the skin, so they’re not as “attractive” to use, but they are much safer.

Do you use sunscreen?  Which brands?  Will this information change your sunscreen habits?