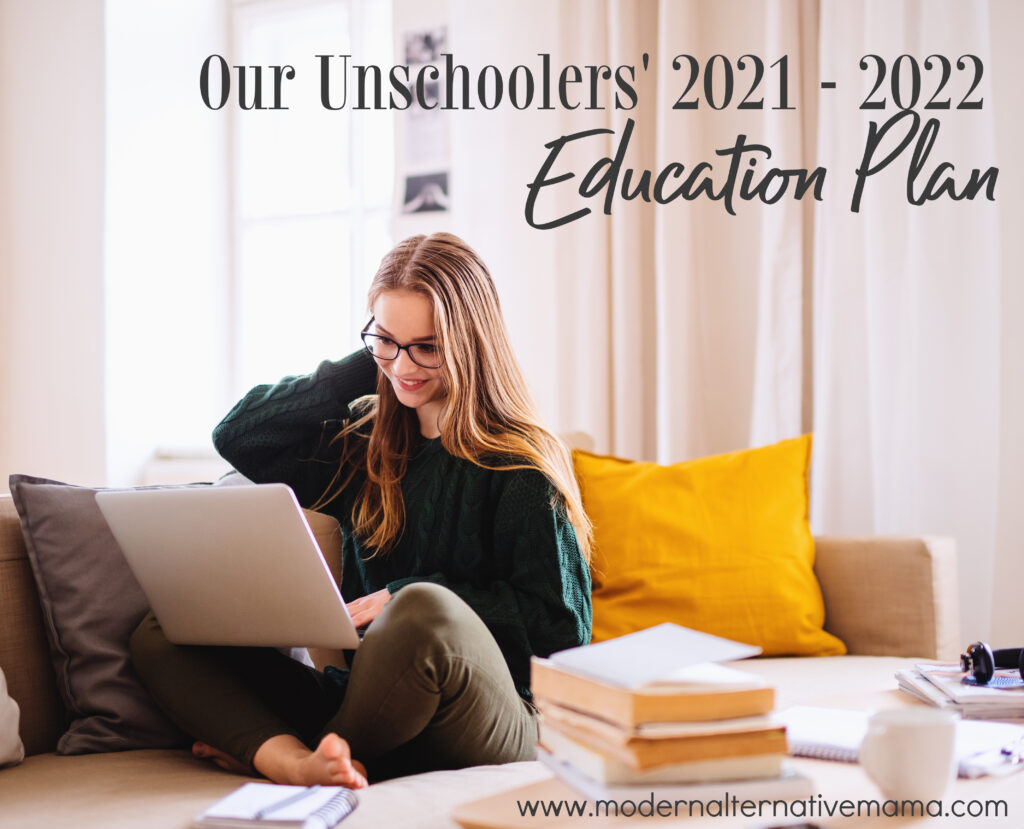 I’ve talked about unschooling since my oldest kids were babies.  In the early years, it really just looks like a lot of playing (which led so many people to say that it was “uneducation” and wouldn’t teach them a thing).  If you’re new to unschooling, definitely check out some of my earlier posts about it:

How we educate has definitely evolved over the years, and what the older kids do is very different than the younger kids.  The young ones (8 and under) mostly just play still, along with a few reading games and online classes.  The older ones are studying much more seriously for their future plans, and do a lot more classes.

The beauty of unschooling is tailoring their education to them.  My oldest three are doing very little that is the same.  We’ve never used a formal, out-of-the-box curriculum, and we still aren’t.

All that said…here’s what our plans are for the fall semester (so far).

My oldest is 13, she wants to own a bakery when she is an adult.  This has been her plan since she was 7, and she’s never wavered on that.  Her fall semester consists of lots of reading (she loves to read), plus several online courses in baking and business:

In addition to all of these, she’ll be doing various chemistry and biology labs with me, in hopes of completing the equivalent of high school courses in those topics.  She also does complicated “business math” problems where she has to figure out pricing of recipes per serving, quoting customers, etc.

We’ll fill in the blanks with acrylic painting, writing challenges, and whatever else she’s interested in.

My second child is 12, and will be doing a wide variety of classes.  He doesn’t actually know what he wants to do yet.  He’s interested in coding, history, French, and a bunch of other topics.  He’s discussed going into business, being a YouTuber, becoming a police officer, and a lot more.  His education is much more varied since he doesn’t have a plan yet (which is totally okay).  He’ll be doing a lot of online classes, too:

He’ll also be doing biology and chemistry with us — some online, and some as a family.  He’s also doing an in-person acrylic painting class, which we’ll take month-by-month.  He also does French off and on via the Duolingo app.

My 10-year-old son told me a year or so ago that he wants to be an engineer.  We spent all of last year exploring that — I was hoping he’d either decide it wasn’t for him, or become even more excited about it.  The latter happened, so we’re doing so much more now.  (It’s so great to be able to explore these things when he’s young enough to change his mind!)  This fall I haven’t fully created his schedule yet, and he’s hoping for more engineering classes, but this is what we have so far:

He also does Tinker Crates and Eureka Crates monthly (and occasionally extra ones).  He reads sometimes, but not as much as the older two do.  (He’s partial to Goosebumps, and really enjoyed Hatchet and the sequels.)

He also plays the clarinet, but goes back and forth on practicing.  We’ll see how that goes this fall!

With these oldest three, we plan to do biology and chemistry.  We’ll repeat the biology labs that the 12-year-old does with the other kids, and we also will add growing bacteria in a petri dish, identifying it under a microscope, and performing a gram stain.  I bought Everything You Need to Know to Ace Biology in One Big Fat Book to go along with these lessons, and I’m sure we’ll pull up YouTube videos too — I haven’t found them yet.  (More planning to do!)

For chemistry, I also got Everything You Need to Know to Ace Chemistry in One Big Fat Book.  I have several chemistry kits, including chemistry of food, important chemical reactions, and more.  We’ll let the kids’ interests guide us as we learn lab safety, how to perform an experiment, and we try mixing different chemicals.  They’re determined to try making “devil’s toothpaste,” which they learned about in a Mark Rober video.  He didn’t share the recipe, but another YouTuber shared what he thinks it is, and they want to find out if it works.

He’s 8, and he’s still doing much more basic things than the older kids are — but that’s okay.  He’s not the greatest reader yet, so we’ll be continuing to work on that skill.  The older ones became solid readers between 6.5 and 9 years, so I have no doubt he will, too.

Beyond reading with us, he has a few online classes he’ll be doing:

I haven’t done his whole fall yet, but he’s solidly booked through September.  We usually pick up classes as we go along.  He also has started to learn the clarinet, but is very much a beginner, so we’ll see if he wants to continue this fall.

He’s only just 6, so we’re not overloading him!  Everything he’s doing, it’s because he asked — he wants to be like the “big kids.”  (Every later-born child can relate!)  He’s been spending a lot of time doing Reading Eggs, which has only kind of helped him learn to read — but he’s enjoying it.  He also has a few online classes, but mostly one-day-only classes, and usually only once a week.  I prefer him to spend most of his time building LEGOs (which he also loves) and playing still.  He has:

I only have classes for him through Sept, but we like to play it by ear.  I don’t want him to get overwhelmed or too focused on screen time.

Honestly, he’s just playing.  He paints, he builds, he draws, he tries to follow along when we do activities.  He’s too young to do any classes yet (he wouldn’t sit still anyway — he’s only 3) and playing is the most important.

We have a lot of different resources we’re using to do these classes!  Here are a few…

We do most of our online classes through here.  Some are one-time classes; some are 4 – 12 weeks.  Classes are available for kids ages 3 – 18 (although we don’t do classes until kids are around 5), and they cost anywhere from $7 on the low end to hundreds on the high end (multi-week tech classes cost a lot).  We try to stick around $15/hr for most classes, which is easily doable.  If you click HERE, you can get $20 off your first class.

My 10-year-old wants to be an engineer, so one of the most important things for him to learn is critical thinking and problem solving.  He spends time here and there on Brilliant working through logic puzzles.  They have math and science classes, too.

These are classes offered by professionals that are 30 days long (hence, the name).  We’re on the wait list for both a bakery business class and an engineering class (with Mark Rober).

I get a lot of our science experiment kits and materials on this website.  It’s not silly plastic nonsense for young children (though I think they might have stuff like that too), it’s real lab equipment and materials.  I try to stick to high-quality, real-world projects that we can really learn from.  You can check them out HERE.

We are also using several local resources, including homeschool coops (they’re doing soccer with a coop this summer), a local art studio, field trips, and more.

Wait!  Is This Actually Unschooling…?

Yes.  This feels like a lot, and it is.  Many people are used to looking at unschooling with young children, which looks mostly like playing and living life.  That’s very normal in the early years.

But unschooling truly isn’t uneducation.  As kids get older, they develop dreams and goals and start to look for opportunities to explore their interests.  My kids chose these classes themselves, and they were absolutely allowed to say ‘no’ if there was something they didn’t want to do.

What we’ve noticed is that because they weren’t pushed into doing things they didn’t want to do, they are very open to taking on things now.  Sometimes they have questions (“When will I ever use this?”) but we talk through it and then they decide if they’d like to do it or not.  We do encourage them at times, but we never force.

I’m sharing all this because I’m hoping that parents who are intrigued by unschooling but who have only really seen the early years can see how it evolves and how it absolutely can work in the later years just as well.

What are your homeschooling plans for the fall?