Our First “Official” Year of Unschooling: In Review |
AD 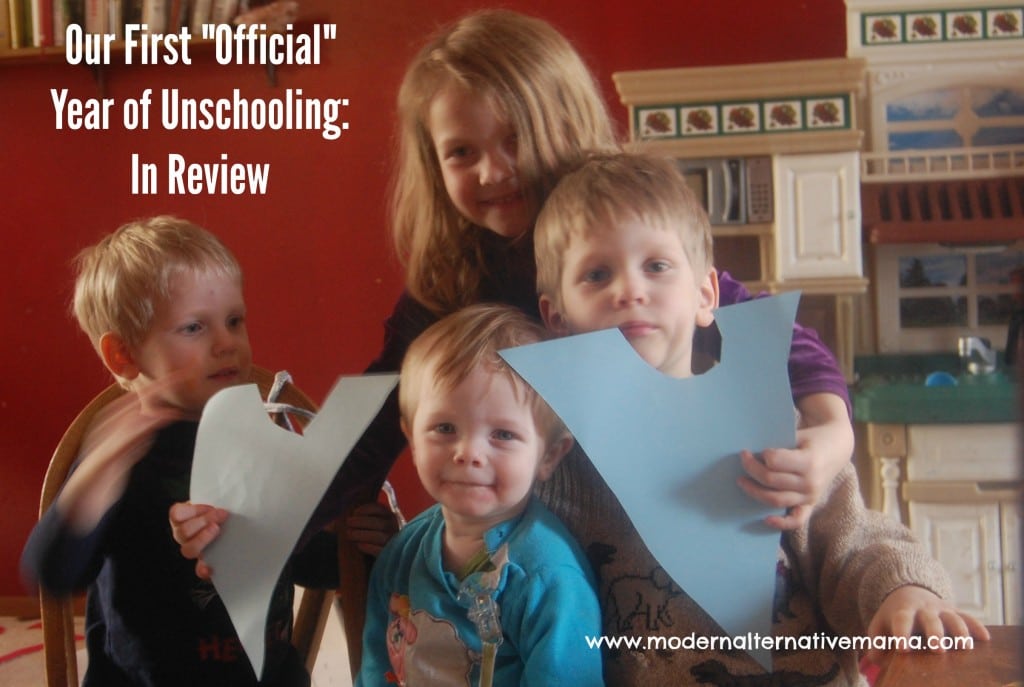 Our First “Official” Year of Unschooling: In Review

In the picture above, they are posing with one of their many projects from our unschooling year.  They made “flags” and strung them up on a ribbon to decorate the room.  And as cute as Nathan is here, he looks so much less “baby” now than he did then.  Sniff, sniff.  It was only a couple months ago.

I decided I would unschool my kids when my oldest was only about a year old.  It might have sounded silly then — what did I know about parenting, or education, or, well…anything?

But unschool we do.  My oldest is now almost 6 1/2 and had her “kindergarten” year this past year.  We did more actual “learning” (if you can call it that; unschooling doesn’t follow a curriculum) with our older two (5 1/2 and 4 last fall).  I have to admit I had doubts at certain points.  I felt weird that we weren’t “doing school” even though we were homeschooling.  And at certain times their gains weren’t obvious.  By the end of the year, though (within the last month or so), suddenly their gains were very obvious and I realized — wow, they are really learning a lot, even though I am not “teaching” them anything.

What Does Unschooling Mean?

Very quickly, I’ll tell you what unschooling means to us.  There are probably as many ways to unschool as there are families.  The general definition is no formal curriculum; learning while living.  But some people are more ‘radical’ and do no book learning or plans whatsoever, and some take a more academic approach (that’s driven specifically by the child).  We fall in between.

We have no curriculum.  We have dabbled in workbooks, but never really stick with them.  The kids pick up workbooks now and then more for “fun” than anything else — and I don’t assign them any specific work.  We’ve also done various printables with them, generally on request (again, no ‘assignments’).

If they’re interested in something, we try to answer their questions and help them learn.  But it’s all child-guided.

This past year, we focused on having a lot of opportunities available.  We always have building toys around — Legos, Duplos, K’Nex, Pipeworks, etc.  We have memberships to local kids’ museums, and this comes with reciprocal memberships to science and history museums around the country (and we take advantage of that to visit other museums near our family members a few times a year).

We also have our “school drawer” with all our general materials — paper, scissors, glue, crayons, pencils, pens, staples, paperclips, magazines, and various other “odds and ends.”  We also had a small bookshelf with several reading books, and some “how it works” type books.  We swap out the books that are available from time to time so they have new things to look at.

Once during the year, I did a “skills assessment” where I sat with each child individually and asked them some questions and had them “play games” with me.  Our state requires portfolio assessment to prove gains in several areas, so this was my answer to that requirement.

We got together with friends usually every week or two for play dates.  Sometimes for crafts, stories, trips to parks, the zoo, museums, etc.

That’s all the stuff that *I* provided.

The real key is what they did with all of these things.

They rarely used their materials in the “intended” ways.  They would use their books for stacking up, putting down the slide, or otherwise “creating.”  They would sword-fight with Pipeworks.  They were always thinking of something creative and unusual to do with what they had.  (I literally never hear “I’m bored.”)

We read a lot before bed, especially with our oldest.  At the beginning of the year, we simply read the story.  Now, we read together and she says the words she knows as we go.  We show her new words as we go, especially words that are interesting to her.  “Princess,” “Christmas,” and “Belle” have been favorites and easily remembered. 🙂

They would ask questions.  A lot of questions, which we would try to answer:

This is just a sample of the kinds of questions they ask.  These are recent ones we’ve heard.  I’ve read the average 4-year-old asks over 400 questions a day…I’d say they ask *at least* that many!  Probably more…

They would ask to watch videos about planets, or volcanoes, how crayons are made.  We would pull these up on Youtube for them.  We also used “How It’s Made,” “Mythbusters,” “Magic School Bus” and similar learning videos from time to time.

They would help us cook — learning to measure, mix, and so on.

We did quite a lot!

What Did They Actually Learn?

Even though it’s probably obvious that they learned a lot, from what I’ve described above, some people would want to hear in a more academic sense how much they really learned this year.

My 2-year-old has picked up on his shapes — including 3-D shapes, some colors, and basic counting, none of which he could do last fall.  He also speaks in full sentences, using correct pronouns, which, again, he couldn’t do last fall.  Oh, and he’s potty trained too. 🙂

So, they’ve learned quite a lot.  I have researched what is “typical” in a kindergarten curriculum and have tried to expose my kids to those concepts.  I don’t sit and “teach” them or force it, I just show them these things.  They pick them up quite naturally, as they are curious about their world and what’s in it.

It’s more fun to remember coin denominations if you’re trying to see if you have enough money to buy something you want, than if you “have to” know for a test.  Same thing with reading a clock…is it time to go somewhere fun? vs. knowing for a test.  The motivation is totally different, and there’s no stress, so they learn.

What Will We Change?

You might be wondering, based on our previous year, what we will change for our upcoming school year.  And there are changes we’re making.

First, we’ll have two “school age” kids — our older two will be 6 1/2 and 5 going into the fall (so in their “1st grade” and “kindergarten” years).  Plus, we’ll have two “preschoolers” (ages 3 and 18 months in the fall).  That means our needs will be a little different.  A lot of our ‘school’ activities that happened last year (more hands-on stuff) happened while the baby was napping.  Only now he’s not so much a baby and he wants to be part of things.

Second, we really want to take advantage of the excitement and wonder of learning better.  We had an insane year with our business and learning mostly fit around that.  This year things should be more settled and we’re going to step it up with the experiences we create.

In that light, we’ve chosen to team up with some other local families and start a homeschooling group.  The group’s aimed at kids who are birth – third grade (roughly) and we’ll be meeting weekly.  Half the weeks are for field trips (local farms, metro parks, the zoo, science museums, etc.) and half the weeks are for “school.”  The vision of the group is to have adults as facilitators and mentors and allow the children to lead.  They’ll choose their projects and basically do the work themselves, with our supervision and input as needed.

Of course, that won’t work for the really little ones, and in that case, we’ll be bringing them simple experiences — crafts, sensory boxes, water play, etc.  Basically open-ended activities that are age-appropriate and which they need very little help to explore.

At home, we’ve changed how our school supplies are set up, and we’ll be doing informal “conferences” with the kids.  That’s really a post in and of itself, so I’ll tell and show you in a few weeks how we have things set up and what these conferences are all about.

That’s our year in a nutshell!

How did your homeschooling or unschooling go this past year?  What topics would you like me to address in the future?