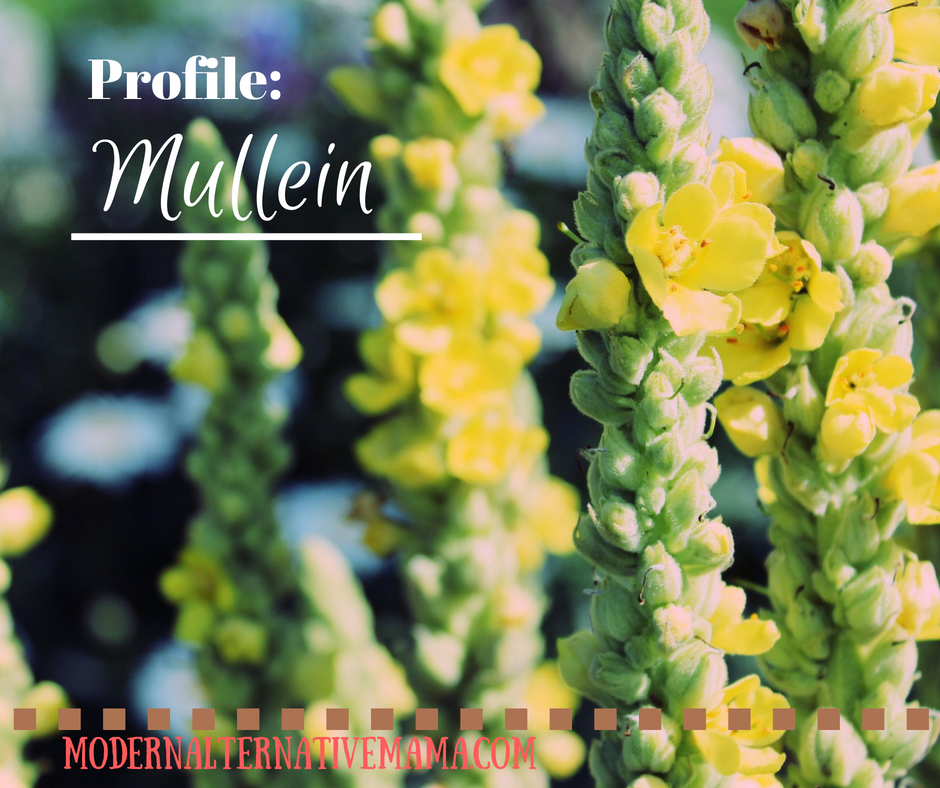 Mullein is one of those magical herbs, that cures everything from an ear infection to a cold. Don’t be without it in your herb supply this cold season.

If you ask my husband what is the best use of mullein, he will let you know that it’s nature’s toilet paper. While people have used its soft leaves for that, it also has a host of natural health uses.

How to Identify Mullein

Mullein is a biennial member of the snapdragon family, and has wide, flat petals, that are usually yellow in the United States. Its scientific name is verbascum, and it is native to North Africa, Asia, and Europe, though now can be found throughout most of the world. The petals grow on a flower spike up to 8 feet tall, while the leaves stay near the ground. The tell-tale leaves are large and fuzzy.

Mullein is an easy plant to identify and find. It likes disturbed soils, so it’s normally easy for people to find even in an urban area.

If you are wildcrafting, be sure to pick an area that is far from conventional farmer’s fields, roadways, and train routes. Pick less than one third of the plant in an immediate area, so that you don’t decimate its population (and ruin the fun for the other foragers). Some are irritated by the leaf’s fuzzy hairs, so try a test patch on your skin before using directly on the body.

In ancient times, mullein was used for lighting torches and making candle wicks. But today, it is used as a natural health remedy throughout the world.

Mullein Garlic ear drops are easy to make and use. Drop two to three drops in the ear, while massaging behind the ear gently and laying on side. Repeat on other side. Use drops two to four times per day during an infection, once or twice per day for prevention during cough or cold season.

To make the oil, you can infuse the mullein and garlic into oil two ways. The longer and older method uses the power of sunlight and time to infuse. Keep a clear, glass jar of the oil and herbs near a sunny spot for two to four weeks, with lid. For a quicker method, you can instead warm the oil on the stove, on low heat, for twenty minutes.

To either method, add one crushed garlic clove and 3-4 mullein flowers, crumbled gently, to 1/3 cup oil.

After infusing, strain, bottle in a dark, glass bottle and keep in a dark, dry place for 3 months.

Cherry bark and mullein together make an awesome team to alleviate the winter cold and cough. I swear it rids a cough faster than anything else in littles! Take twice a day, when waking and when going to bed, when a persistent cough arises.

Warm one pint of distilled water over medium low heat. Add 1/8 cup of dried cherry bark, and 1/8 cup of dried mullein leaves into the water. Allow to heat for at least 20 minutes, up to two hours (on lower heat). The longer you warm the herbs, the stronger the cough syrup. Feel free to sweeten with a teaspoon of raw, local honey. Bottle, refrigerate, and be prepared for the winter cough!

You can make a large batch and freeze it, then warm it when needed. It will keep in the refrigerator for 6-8 weeks, in the freezer 8-10 months. *Only consume cherry bark for two weeks maximum. Though there are no contraindications to mullein, its fuzzy hairs may irritate the skin or throat. Be sure to strain the leaves and stalk before using.

How have you used mullein in your home’s natural medicine cabinet?