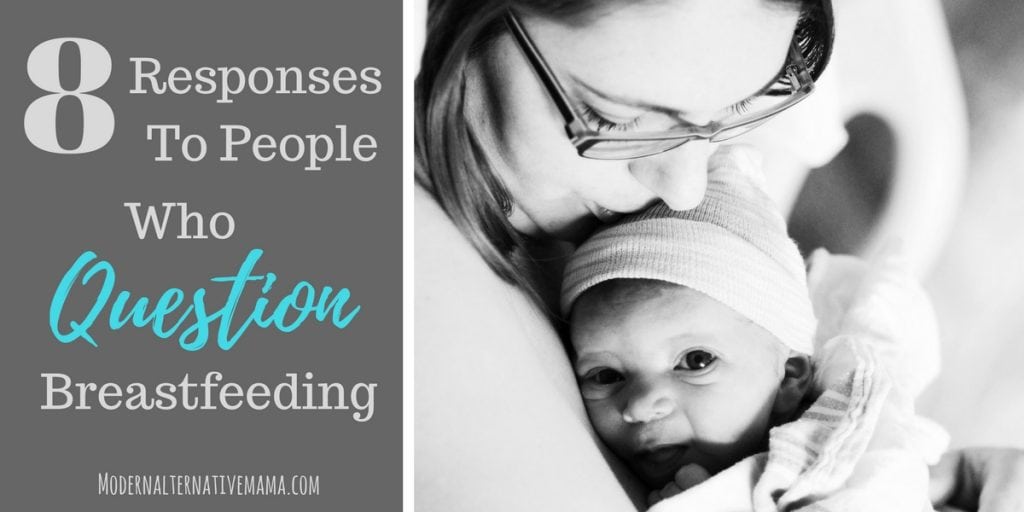 8 Responses to People Who Question Breastfeeding

If you’ve breastfed for any length of time you’ve probably had at least one person ask you how long you plan to breastfeed or if you are still breastfeeding. (Gasp!)

Sometimes the question is innocent and sometimes it’s not. Not all the people who question breastfeeding are trying to be rude. Sometimes it’s complete lack of knowledge that causes a person to say things that could be offensive.

Unless the question is absolutely absurd, I try not to take offense when someone asks me questions about breastfeeding.

In general, people are curious and just don’t know the answers.

We moms in the breastfeeding community need to be quick to give an answer that is both kind and educational without causing any offense.

Sometimes when people question breastfeeding, they generally want to know because they are not educated.

However, I have also found that if I have a response prepared, when the questions come, I’m much more able to answer graciously and without feeling offended.

Granted, there’s always that one person who makes a snide remark about breastfeeding your kids until they’re ten years old! Unfortunately, those people will never go away.

In case you find yourself in need of answering people who question breastfeeding, here are eight responses you can give inquiring minds who really want to know.

As I hinted above, people who question breastfeeding might really be asking because they don’t know the answer. If that’s the case, then giving them a bit of education might be the best response.

In fact, I’ve found that when I’ve engaged an inquisitor with an educated response, we have actually had some very interesting conversations.

In fact, I’ve actually learned a thing or two by allowing my mind to be opened up to someone else’s thinking.

Of course, if you’re going to give an educated answer, then you need to make sure that you have the information you need in order to respond correctly.

Spend a little time researching some of the most common questions you’ve been asked so you can give the appropriate answer.

I’m all for setting a healthy boundary.

It’s okay to tell someone that you’re uncomfortable talking about your breastfeeding habits, schedule, or anything in between that might make you feel uncomfortable.

Of course, this can be done very gently but in a way that lets your curious interrogator know that you are not interested in discussion breastfeeding or anything of the like.

If you choose to set a boundary, don’t feel bad about it. Make sure you stick with it!

Gently Remind Them Who the Baby Belongs To

Sometimes when a person asks you breastfeeding questions, it’s in an attempt to get you to realize they don’t agree with what you’re doing.

Such as the person at a family reunion you haven’t seen in years innocently commenting, “Isn’t your baby three years old?”

You both know there’s more sentiment and insinuation behind the question then just simple curiosity.

(Besides, breastfeeding your baby after a year is a very good thing!)

In that case, I have no problem letting the person know that the baby belongs to me and since I’m the one nursing her I don’t have to let anyone know my breastfeeding plans.

I’ve also taken that opportunity to tell the person asking the question, that since they don’t have to worry about breastfeeding my baby, they shouldn’t worry about me doing it either.

I’ve found it usually sets people in their place as long as I am gentle and courteous.

No one knows your story. They don’t know your struggles, your plans, or your problems.

Whatever You do, Don’t Argue

Definitely, don’t argue because it will get you nowhere.

If the person asking questions about breastfeeding simply wants to engage in a debate, then it’s really not worth your time to respond.

Arguing about breastfeeding because a person asked a silly question, doesn’t accomplish anything and won’t help you or your baby.

If you sense the person is being snarky and wants to pull you into an argument, simply refuse to respond and let them feel like the awkward one.

Trust me, it’s not worth your time!

Ask The Person a Question in Response

I’ve found that one of the best responses is simply to ask a question of the person asking you the question in response to their question. (Follow me? 🙂 )

It allows the person asking to contemplate their question and might make them realize the way that question makes you feel.

Besides, you might actually find you learn something new in the process!

Be Completely Confident in Your Decision

Never ever apologize for your decision to breastfeed no matter what.

Your choice to breastfeed is entirely your choice and no one else’s.

Don’t let a friend or family member make you think that you aren’t doing the right thing because you aren’t conforming to what they think you should be doing.

You’re the mom and you get to make the decision.

Be confident in that!

A funny comeback doesn’t necessarily have to be snarky.

A quick search online and you’ll find that many people have come up with responses that are downright rude.

I don’t ever think it’s appropriate to make a person feel silly for asking a question as long as the question they’re asking isn’t inappropriate (or rude).

Assuming the person who’s asking you is sincere, then sometimes a funny comeback isn’t inappropriate.

But I always follow-up a funny answer with a serious and sincere response so that the person who’s asking doesn’t feel terrible for having ventured out to ask me something so personal.

Sometimes the best response is no response.

I’ve often found myself referring to this option in a time of need.

For some reason when people are bold enough to ask me the question how long I plan to breastfeed, it makes me feel something inside that I’m not always excited about!

I feel that it’s a personal question and it isn’t really anyone’s business.

Saying nothing at all sort of puts the person in their place without being rude. I kind of just nod my head and overlook the question, possibly changing the subject.

Hopefully, you’ll find one of these 8 responses to breastfeeding questions to be a suitable response for anyone asking you about breastfeeding.

Of course, it’s a good idea to always assess the situation, determining for yourself whether or not the person means any harm in their question.

Once you’ve decided the answer, choose one of the responses appropriately and don’t worry about the response of the person asking.

If you want to breastfeed your baby, then do so happily, because it’s one of the most amazing things you’ll ever do as a mom!

What do you say to people who question breastfeeding? Do you have any good responses?

Amber
Amber is the proud mama to seven great kids ranging in age from 16 years old all the way down to 6 months. She is married to Ben who also happens to be her pastor. Amber has a passion for helping people and enjoys finding new recipes to accommodate the various food allergies of several of her kids as well as her husband. She homeschools all her kids and has a love for things all natural. Finding ways to eat clean and natural is a high priority. No preservatives for this girl!
AD