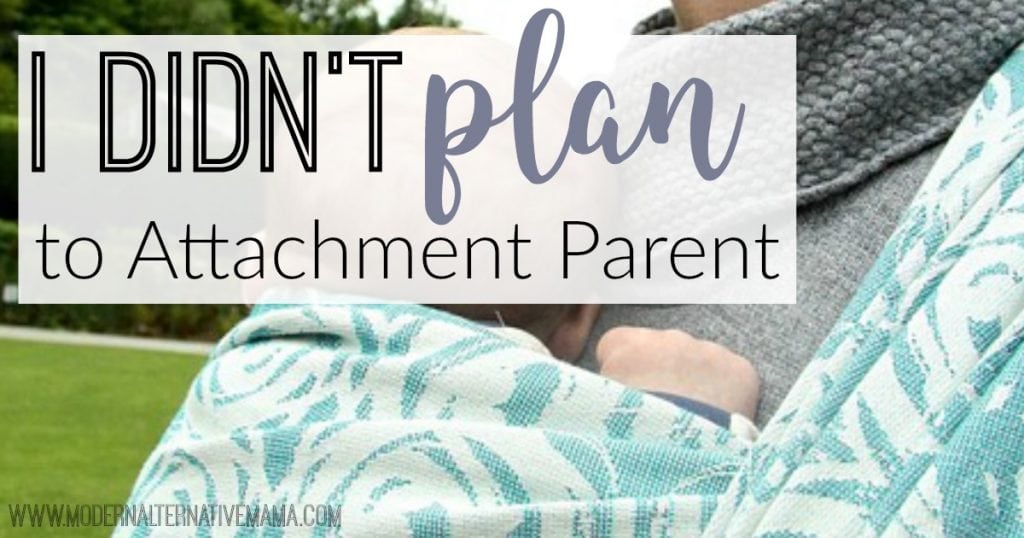 I Didn’t Plan to Attachment Parent

I didn’t plan to attachment parent, but it was what worked best for my son and for our family. Contributing writer Caroline will share her experience about how learning to be a “good” parent isn’t as easy as it seems.

When I had my oldest son, I just thought I’d carry him around all the time. After all, I saw other moms doing that all the time. That’s just what moms do, I thought.

Then I had my son. My 9 pound 9 ounce chunk. My big baby who was c-sectioned instead of the natural birth I’d planned and dreamed of. I was recovering from major surgery and was struggling to take care of myself, let alone a newborn for the first time.

I didn’t plan on learning how to use a Moby wrap for the first time, and then never putting my son down again. And I never planned on having him in our bed until he started climbing out of our bed and into his own bed. I never planned on never leaving him until he was almost two.

Truthfully, I never planned on attachment parenting. I’d never even heard of it! But that’s exactly what happened. And it worked for us.

I Didn’t Plan to Attachment Parent

From the moment that we announce that we’re pregnant, we’re surrounded and sometimes bombarded with the “right” way or the “best” way to birth a baby and be a parent. Parenthood and birth are not something that is a cookie cutter. Something that works for you might not work for me. It took me a long time to realize that, but it was then that I realized that it was ok to be different.

All you have to do really is what works for you and what works for your baby. I say that now, looking back at everything almost six years ago. At the time, it was not easy. I was already dealing with a lot of ridicule for having a c-section instead of my intended natural birth. And now I was facing ridicule for holding my baby. For having him with me. For never wanting to be away from him.

It was like I was a bad mom no matter what I chose to do. It felt at the time like the “best” way to be a mom, according to everyone else, was to leave my child with someone else or to let him be on his own. Once I had my son, it felt so wrong to be away from him.

I wanted so badly to have a night to myself and to be able to hang out with people who didn’t have children yet. But the second that I walked away from my son, I felt naked. I felt like there was a part of me missing.

I had every intention of being able to pick my life back up once my son was born. To be able to continue to socialize with people without children. To be able to go out with friends and enjoy staying out late.

Needless to say, these are the same people who were telling me that I was “spoiling my son.” I’m sorry… you think holding my baby was me spoiling him? That felt so wrong to me. Since when is giving physical affection spoiling someone?

I didn’t plan on bed sharing either. When I was pregnant, I yearned for the days  when I would be able to stretch out in my own bed and have my own space to end my day.

I kept our sleeping arrangements secret for fear of the ridicule that I would get from family and friends about the way that we chose to parent. Once again heard that I was spoiling my son. I heard that I was getting him too used to being around me. That I was going to wind up with him sleeping in our bed until he was a teenager.

It took us a long time to feel comfortable making your own decisions. It wasn’t until I met a close friend who had a son and was doing parenting the same way that we were. I was so pleased to hear somebody validate that I was doing the right thing.

It was right then that I realized that everyone parents differently. There isn’t one right or wrong way to be a parent. There’s no cookie cutter way to do the right thing for our children. And it’s okay!

Before my son was born, I did have plans…

to breastfeed for at least a year

But I didn’t plan…

to have a baby in my bed for 18 months

on nursing for 18 months

Personally, I would have gone back and started planning on attachment parenting before I had my son. I would have plans on having him in our room and in our bed instead of having to go out and buy an expensive and bulky crib that didn’t fit well in our apartment at the time. I’d also go back and tell myself not to listen to the negativity. For whatever reason, attachment parenting draws a lot of negative comments and a lot of hate. I’ll never fully understand it, but I know that it works well for us.

What does being an attachment parent look like to you?