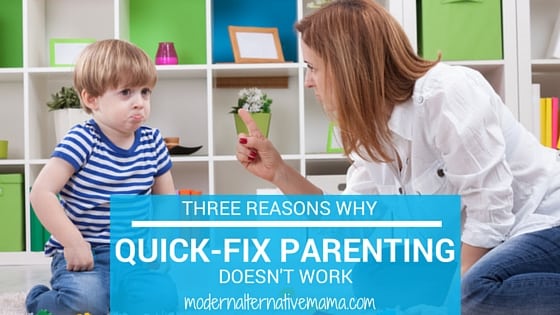 We’ve all done it: yelled at our child as a knee-jerk reaction, sent them to their room to diffuse the situation, doled out a punishment in the heat of the moment before considering all of our options. It’s called quick-fix parenting and it really doesn’t fix anything. Below, I’ll tell you why quick-fix parenting doesn’t work. (Read: Gentle Parenting Raises Good Kids, Too.)

After working to heal my son from a number of behavioral disorders, I’m still trying to find my footing in the area of discipline. For so long, I had to decipher which behaviors were my son acting out, and which were out of his control, as he struggled with symptoms of ODD and Asperger’s.

Now that he’s come so far and experienced so much healing, I’ve been able to really get to the heart of discipline: what really works, and what doesn’t. I find that heat-of-the-moment discipline, aka quick-fix parenting, doesn’t really solve anything in the long run.

Doesn’t Get to The Heart of Your Child

When we react in anger and discipline too quickly, without thinking our options through, we may be stopping a child’s undesirable behavior, but what are we really accomplishing? Not much.

These quick-fix parenting impulses are really just a band-aid. They don’t help us figure out why our child is acting out so that we can really get to the heart of the problem, and, ultimately, reach our child’s heart.

Undoubtedly, reaching our child’s heart takes a lot more time and effort than quick-fix solutions, but it is so worth it in the long run. With four boys underfoot, I’m guilty of quick-fix parenting more often than I’d like. In fact, I would venture to say it’s my default. Getting to the root of the problems with my children’s behavior takes time, and some days I’m already stretched so thin, that I don’t take the time needed to really resolve the underlying problems behind my kids’ behaviors.

It’s pretty obvious once I stop and consider why my child is acting out, that there’s a reason, and often, one of them just wants my attention.

It also seems like I’m constantly breaking up fights between my four rough-and-tumble boys. My quick-fix parenting solution would be to just take the toy away, or send them to separate rooms, but if I want to really reach my kids on a heart level, I will take the time to discuss with them the importance of sharing, treating each other the way they want to be treated, and extending forgiveness to one another for hurt feelings.

I know it’s easier said than done to stop and take the time needed to deal with these situations, but for the sake of improving your child’s behavior thanks to a real heart-change rather than just temporarily stopping a behavior with a temporary disciplinary action, it is worth it.

Read 5 Ways to Avoid Power Struggles with Your Kids to learn more about getting to the heart of your child.

When discipline doesn’t reach our kids’ hearts, we also don’t have much hope of receiving any long-term behavioral improvements from them. Instead, quick-fix parenting stops a behavior in the moment but doesn’t do much to improve future behavior.

A child might think “yeah, I got punished last time I did this, but it wasn’t that bad, so I’m going to do it again,” when they receive a temporary, quick-fix punishment. When we don’t stop and explain to our kids why their behavior is unacceptable, or how it affects other people, they don’t have much motivation not to repeat the behavior.

However, I notice when I stop what I’m doing and really get on my kids’ level, look them in the eye, and explain the effects of their behavior to them, then apply a logical, reasonable consequence when necessary, they have a real heart change about the matter. The next time they are tempted to engage in the same selfish or hurtful behavior, they are more likely to exercise self-control and refrain from that behavior if I’ve taught them a lasting lesson that has made an impression on them versus yelling or sending them to their room.

Strains Your Relationship with Your Child

Most importantly, quick-fix parenting is not healthy for your relationship with your child. Yelling at your child belittles them and stresses you out. When I yell at my kids, it hurts their feelings and leaves me feeling tense and physically ill.

Sometimes discipline does hurt my kids’ feelings, don’t get me wrong, but when I take the time to talk it through with them, they understand that the consequences are the results of their own actions, instead of feeling resentful towards me for serving up a punishment that makes me feel better in the moment. Quick-fix parenting leaves kids feeling like their opinions and feelings don’t matter. It doesn’t open up a dialogue between you and your child, which stunts understanding on both your parts.

It’s becoming increasingly hard to protect our kids from the ugliness of the world, but the better of a relationship you develop with your child, the better shot you have. (Read: The one thing we can do to make the world a better place.)

If I’ve said it once, I’ve said it a thousand times. Being a mama is the toughest job I’ve ever -or will ever- have. I have bad days. Days when I yell; I lose my cool; I mess up.

This gentle parenting thing is new for a lot of us, and though I desire to raise my kids in a gentle way, it’s not exactly how I was raised. It doesn’t come naturally to me.

I’m guessing I’m not alone in that. I know old habits are hard to break, and it’s easy to fall back on what we’re used to doing: quick-fix parenting. Get results now, and worry about the consequences later.

There’s a saying: “It’s easier to build strong children than to repair broken men.” I want to get to the heart of my children’s behaviors in a loving way now so that later, I don’t have to wonder about what I should’ve done differently.

Do you rely on quick-fix parenting? How have you found to avoid it?