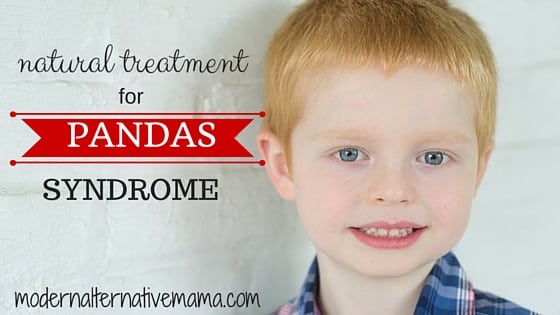 PANDAS syndrome is not exactly a mainstream condition. Not many pediatricians seem to be familiar with it and most parents don’t know to ask about it. But with the increase in children’s mental and behavioral disorders, taking a deeper look may be needed.

If you aren’t familiar with PANDAS syndrome, here’s how to spot the symptoms, get a diagnosis, and treat it… naturally.

First, PANDAS syndrome does not refer to a big, fluffy, white and black bear. A child with PANDAS may behave like a bear… but that’s not what we’re discussing here. PANDAS stands for Pediatric Autoimmune Neuropsychiatric Disorders Associated with Streptococcus.

PANDAS is a mental disorder caused by strep bacteria.

(one of the most common symptoms)

Children suffer from all kinds of behavioral and mental disorders. How in the world are you supposed to narrow down whether or not it may be PANDAS? There are a couple of tell-tell signs:

Your child’s disorder began following a confirmed strep throat infection. If your child develops new behaviors, personality changes, or tics following a confirmed strep throat infection, run, don’t walk, to find a practitioner knowledgeable about PANDAS. (You can call around to pediatricians, naturopaths, and even chiropractors to see who might be able to help you).

The new behaviors started following any illness. This is kind of tricky. My own son’s symptoms of PANDAS began following a respiratory illness with no obvious symptoms of strep. We later found out he did, indeed, have a persistent strep infection. Read his story of healing: PANDAS Syndrome: Camden’s Story of Healing.

The symptoms started following a sibling’s strep infection or during a strep outbreak. Sometimes a malfunctioning immune system allows a pathogen to take root without any outward symptoms of illness. So if you count yourself lucky that your child did not get strep during an outbreak, but he’s developed strange behaviors, he may have an underlying strep infection that needs addressed.

How to Diagnose PANDAS Syndrome

Because PANDAS is not mainstream, it’s not likely that all pediatricians are going to be able to correctly diagnose it. As I suggested, try to track down a knowledgeable practitioner. Once you do, there are some helpful tests to have run, including having your child’s strep titers checked.

Titers show if your child has been exposed to an illness, and if he has had an immune response. The blood tests to run to check your child’s strep titers are the Antistrepolysin O (ASO) and Antistreptococcal DNAase B (AntiDNAse-B).

Another less mainstream way of testing is via stool. This was the case for my son, who was found to have a strep infection in his gut. A mainstream pediatrician in less likely to be familiar with this type of testing, but may consider ordering the blood tests for you if you request them. If you suspect PANDAS, it may be worth asking. If you have a child with PANDAS, you know it can be a tough road to walk. You can probably pinpoint when the changes took place and may feel helpless to improve your child’s condition. I’ve been there. My son’s PANDAS symptoms have included tics, aggression, rigidity, and other behaviors of oppositional defiant disorder.

The symptoms of PANDAS turn your life and family upside down. But there is hope for things to get better!

More main-stream doctors will prescribe long-term antibiotic usage. This was not the route I wanted to take, and if you’re reading this, you are probably looking for other options as well, since antibiotic usage (especially long-term) can destroy good gut flora.

As I detail in Camden’s story of healing, we utilized herbal treatments and other natural methods for healing my son’s PANDAS symptoms.

We stuck with a very strict diet, first removing harmful food additives and ingredients (read: Heal Behavioral Disorders: Remove These Ingredients from Your Child’s Diet NOW). From there, we ate a paleo diet, and, finally, moved on to the GAPS diet, which ultimately helped to heal his gut due to its focus on nourishing foods like broth, organ meats, and fermented foods, and removal of gut irritants like sugar, grains, and starches.

Another important step to take for gut health is to choose a good probiotic. For a child with PANDAS syndrome, you cannot choose just any probiotic, as some commercial probiotics contain strains of strep bacteria! We use a gentle but highly effective formula that is free from strep and other potentially harmful strains of bacteria.

Once we got gut inflammation under control, we then addressed the underlying infection. What will work is going to be individual for each child. There are many, many herbal alternatives to antibiotics. Get Healing with God’s Earthly Gifts to learn more about natural herbal remedies.

For my son, oregano leaf extract was a game-changer. Oregano leaf is a very strong anti-bacterial, anti-viral, anti-parasitic herb. I have used it to heal strep throat, and, recently, scarlet fever in one of my younger children. It has been very effective at diminishing the symptoms of PANDAS syndrome for my son.

Other good anti-bacterial herbs include:

I also gave my son some natural treatments for parasites, just for good measure.

I actually started his protocol with diatomaceous earth (DE), a natural silica powder made from the fossilized remains of tiny, aquatic organisms called diatoms. This powder kills parasites by cutting them up; it doesn’t hurt your insides, but effectively destroys the parasites on a microscopic level.

Once he had been on both the DE and oregano for a couple of weeks, I added in another herbal tincture designed for intestinal health, called intestinal tract defense, which contains strong anti-parasitic herbs, including black walnut green hull and wormwood.

Hope For the Future

This is the protocol that has been working for us and reversing my son’s symptoms of PANDAS syndrome. We will likely have to persist with these treatments for some time before he is totally in the clear, but it’s working! You can have hope too!

My son went from being angry, aggressive and mean towards his brothers, and disrespectful to his dad and I, to being kind and helpful. His tics went away, but returned after his brother’s recent scarlet fever illness. We’re getting them back under control with our herbal protocol.

If your child is suffering from OCD, ODD, tics, anxiety, or other symptoms of PANDAS syndrome, explore whether or not PANDAS Syndrome may be the cause. Natural treatment may be the answer you are looking for.

To receive a free printable booklet all about PANDAS Syndrome, click here!