Why I Didn’t Buy an Infant Seat |
AD 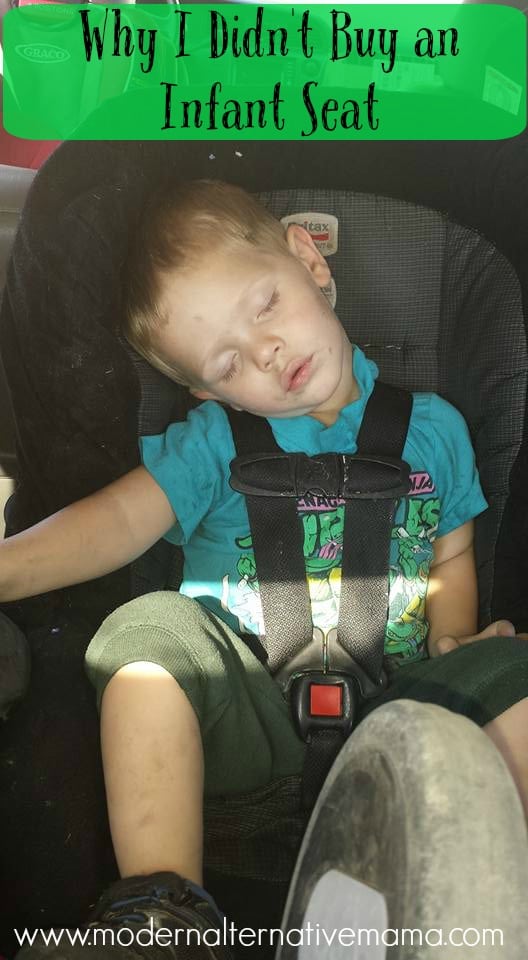 Why I Didn’t Buy an Infant Seat

When I was pregnant with my oldest, I knew nothing about car seats.

I didn’t know what the laws were, what was available, or anything at all about safety.  I picked up a used seat at a garage sale, with its stroller, for about $40.  That was what we used for the first few months.

I learned that that really wasn’t the safest or best idea, so we upgraded her to a brand-new convertible car seat at 4 months of age.  We got an even better convertible seat when she turned 1, and kept her rear-facing for almost 3 years.  (My, how things changed!)

When our first three boys were born, we had an infant seat, which I bought brand-new for the oldest boy.  We knew it would expire before we had another baby, so there was a new choice to make before our fifth was born.

Why I Didn’t Buy an Infant Seat

First I have to state, because this is the internet and people like to read into things way too much…I’m not criticizing people who choose and like infant seats.  Plenty of my friends use them and are glad to have them.  I’m glad that works for them.

It doesn’t work for everyone, though, and since most people do buy infant seats, I’m sharing my perspective on why I didn’t.  No need to get upset or yell at me if you love yours (but perfectly fine to respectfully tell me why you do).

The majority of the infant seats on the market go up to about 20 lbs., although there are a few that now go up to 30 lbs. or so.  Many babies outgrow infant seats in weight by the time they are 6 months…some, not until 12 – 15 months.  Of course, a 20 – 30 lb. infant plus the seat is quite heavy, so a lot of parents quit carrying them around once baby reaches a certain weight — often at the point where baby can sit up.  I definitely did.

That means that the major ‘feature’ of an infant seat — being able to carry it from car to house or stroller (or wherever) without moving baby, is good for possibly 6 to 9 months.  Most seats cost around $100, which is kind of a lot for short-term use.  Plus, if you think you will have another baby, you have to then store the infant seat until the next one arrives, assuming it isn’t expired by then.  (Most seats last 5 – 6 years.)

I personally prefer to wear my babies when they are small, rather than carry them around in car seats or other types of baby-holders.  (I use a Moby wrap for the first few months, then a Beco.  Caleb is 4 months now and in the Beco most of the time.)  I can count on one hand the number of times I actually took my boys anywhere in their car seats.  So, that feature just wasn’t that important to me in the first place.  Being able to carry the car seat possibly 5 times was not a reason to spend $100 on a car seat I didn’t really need.

All my older kids moved to a convertible car seat between 4 and 12 months, so this time I figured I’d just start with one.  I did a lot of research into what was out there.  I’ve been pretty loyal to Britax for convertible seats.  (Although at this point, only 2 of my 5 are in Britax seats!)  But, I wanted one that was specifically good for newborns, and would last for years.

Ultimately I found Graco Headwise 70.  All the car seat reviews I found said it honestly fit a 4 – 5 lb. newborn well, and yet also fit a 60-lb. kindergartener.  Okay.

I put my 5-year-old in it when he weighed about 37 lbs.  He fit easily and was comfortable.  Then the baby arrived, and I put him in it.  He was just over 8 lbs. at birth and it did fit him well.  It’s been super easy to adjust, too, because it’s a no-rethread harness.  I just slide it up when he grows!

As it happens, he isn’t a big fan of the car or car seat.  He will sit if he isn’t at all wet or hungry and the car is moving and be okay.  Almost as soon as the car stops, he starts crying and wants to get out.  Two hours a day in the car is about his limit, and he just cries after that.  I don’t think I would have ever been able to carry him around in the car seat even if I’d bought an infant seat!

And, he can use this seat until he weighs 70 lbs., or is too tall for it.  He’ll go directly from this to a booster when he’s around 6 years old (which is about the life of the car seat anyway).  It also rear-faces until 40 lbs. so I will be able to keep him rear-facing for 3 – 4 years.

All in all…it would not have been worth it to me, to spend $100 for a seat I would have used for less than a year, and then shell out another $200 for a quality convertible seat for another few years.  This was way better.

And no.  Graco has no idea I’m writing about this.  Nobody paid me.  I just thought I’d share what really works for our family.  I’ve been really pleased with the seat, and with our choice.

I’d be remiss if I ended this without saying something about car seat safety.

As I mentioned at the beginning, I didn’t used to know a whole lot about it.  Now I’ve learned quite a bit.  Pretty please, listen, because this can be life or death for your child!

Choose a car seat that fits your child and your car well.  That means it needs to be installed snugly, with no more than 1″ of back-and-forth motion at the base.  Check with a local CSPT (Child Safety Passenger Technician) to help you install it if you are unsure how.  They will do it for free.  Many fire stations offer this service, or you can connect with one on Facebook.  You can’t be an expert on everything (no one is), so no one cares if you need help with your car seat — they are glad to do it.

Make sure you strap your baby in correctly, every time.  The buckle should be against their body (there are usually multiple positions for it, closer for small babies and further for bigger ones).  The straps should be flat, untwisted.  The straps should also be tight — you should be able to slip one finger under them and no more.  (They should be tight enough not to see any obvious slack.  But of course they shouldn’t be uncomfortable.)  And, the clip?  That goes on the child’s chest, and not on their belly.  In an accident, that clip, if it’s across the bony chest, will pop open and help keep them in place.  If it’s on their soft belly, it could dig into their bodies, causing internal bleeding or bruising and other damage to internal organs.

Finally, rear-facing.  Rear-face as long as possible.  It is truly so much safer!  The size of the child doesn’t matter, as long as they have not outgrown the limits of the seat; it is skeletal maturity that matters.  There’s a huge difference between a 30-lb. 18-month-old and a 30-lb. 5-year-old.  Just like their cognitive development is vastly different, so is their skeleton.  Little kids can more easily have “internal decapitation,” where the head is thrown forward so roughly in an accident that the skull separates from the top of the spine — this is almost always fatal.

I am a huge stickler for car seat safety. 🙂  If there’s anything you’re unsure of, please ask!

Did you buy an infant seat?  Why or why not?