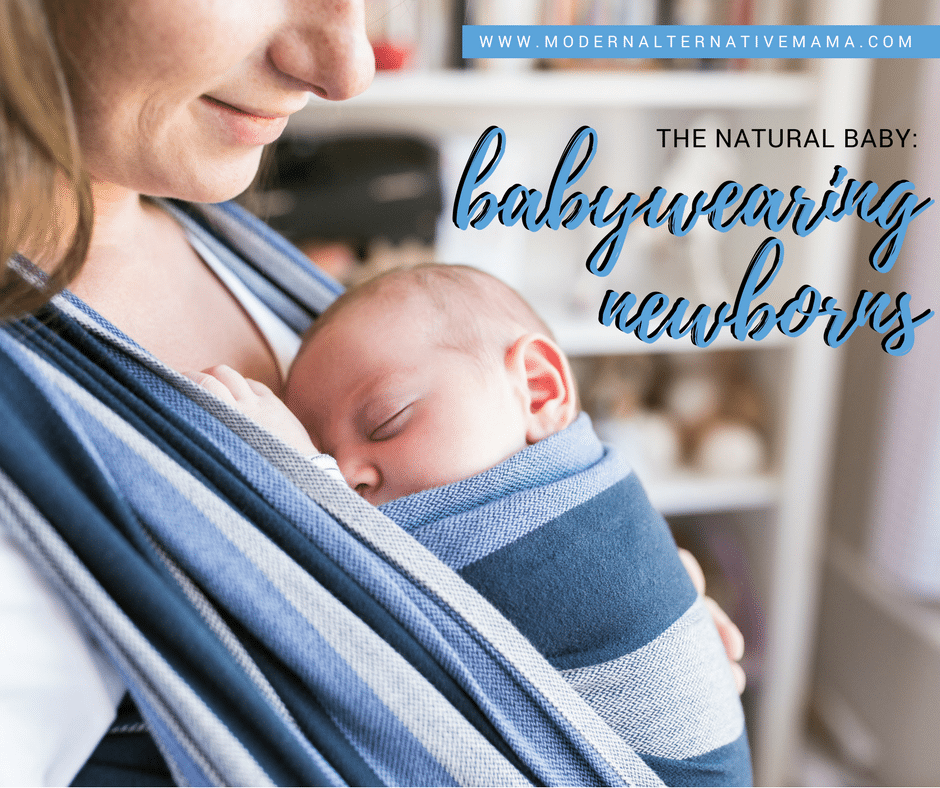 Welcome to the brand-new The Natural Baby series!

My fifth baby was born a month ago.  I shared his birth story two weeks ago — you can read it right here.  It was my fourth home birth.  We’re now in the midst of the early days of babywearing, co-sleeping, breastfeeding, and more!

As an experienced mama, I know there’s a pretty steep learning curve the first time around.  Maybe even the second time around, if you’re learning a new way.  (I did everything pretty mainstream the first time, and learned about all the ‘alternative’ ways with my second.)  That’s why I’m taking you on a journey through my baby’s first year of life — so I can show you some of the major decisions, milestones, and more that you’ll face, and how I handle it (plus what some of the other ‘natural’ options are).

If you’re looking for a real-life example of natural mothering, then you’ll want to follow along. 🙂

The truth?  That first month is often a haze.  That’s true whether it’s your first, your fifth, or your tenth.  It’s easier once you’ve done it a few times because you know it will be that way and you don’t expect otherwise.

And please, mama…if this is your first time, rest.  All those pictures of moms that are dressed nicely, wearing makeup, and out running around mere days after giving birth?  So not realistic for most mamas, and not something you should be striving for.  Those women who brag about how “fast” they were up and about after birth?  Good for them, but please don’t think that’s healthy or “better” because it’s not.  You need time to lie down, snuggle your baby, recover.  Pregnancy and birth are huge on your body.  Instead of celebrating how quickly moms look/act “normal” again we should be celebrating the moms who rest and recover well, and helping them do so!

Give yourself at least a couple weeks with no expectations.  It does not matter if you get nothing done in a day besides feeding yourself and caring for your baby.  That’s all you need to do.  Plus, your new little one is only little so long…it does not last.  Enjoy it while you can!

All newborns are — to some degree — unsettled when they are first born.  They are trying to figure out what to make of life outside the womb.  It’s drastically different for them — they have to eat now instead of being fed continuously.  They can get too hot or cold.  Things can poke them or hurt them (like overly enthusiastic siblings…).  They get wet.  It’s rough, being a baby!

These very first few days, they are trying to figure out if the world is a good or bad place.  They need your help learning that.  The best thing you can do is hold them constantly, snuggle them, and nurse them on demand.  My fourth baby was extremely uncertain his second day of life and wanted to nurse every ten minutes for twelve hours straight.  So we did — and the following day he was much calmer.  My fifth baby seemed similarly unsure in his first and second days, and then he relaxed and decided the world was good.

How is he this big already?!  One month old.

A lot of babies sleep at random and this makes for very tired mommies.  We’ve found it helps to co-sleep (bed-share) from day 1, and to have them snuggled in warmly in a dark, quiet room at night.  During the day, they nap anywhere and everywhere and we don’t turn down the noise or make the room dark at all.  They pick up on the difference in a handful of days.

Caleb slept randomly his first few days, sometimes wanting to be awake around 10 or 11 when I wanted to head to bed!  We discouraged late night waking by getting up in the morning around 7 or 8, going downstairs and talking to people.  If I slept in without him for a couple hours (which I did sometimes in that first week or so), I made sure that he was brought back as soon as he showed signs of hunger.  With previous babies, people had used pacifiers to hold them off from eating for a little while so I could rest.  Unfortunately, they got into the habit of sleeping a longer stretch in the morning, from around 7 – 10 or 11 AM.  Then their wakeful period was late evening, from perhaps 8 or 9 until 11 or 12.

We avoided that this time.  Caleb is usually wakeful in the morning, and in the late afternoon.  He is ready for sleep by 8 or 9 PM most nights, and typically nurses again around 11 when I am going to bed, then sleeps sometimes until 4 AM (and sometimes nurses a little bit between 11 and 4, but he doesn’t usually wake for a “big” feeding until 4 or 5).  This works out pretty well with our family’s schedule.

It is possible to gently encourage babies to adopt good sleeping habits from day 1!  With the understanding that they can and will change it up on you as they grow, have growth spurts, teethe, and so on.

I’ll discuss breastfeeding in more detail in the next post (which publishes Aug. 1), but both of these are pretty critical to the early days.

First, keeping baby close to you facilitates breastfeeding.  That’s where babywearing comes in.  I usually use a Moby wrap, especially when I am away from home.  At home, I like a simpler option, which is why I use the NuRoo babywearing shirt.  I had one I used with Nathan, and I have another I use now with Caleb.  (The shirt looks gray because of the lighting, but it’s really black.)

For those who don’t love the Moby because it is so much fabric (I have to admit that’s annoying at times, it’s summer and it’s hot!), the NuRoo shirt is much cooler and easier to wear.  It’s really easy, too.  Put the shirt on, slip baby into the pocket, close it (with hook and loop) and tighten the belt below baby.  That’s it.

When I’m just hanging around the house, the only clothing I wear, often, is a nursing tank and this shirt.  (Or just the tank if I’m not up and about!)  NuRoo also makes a really soft, cute scarf that doubles as a nursing cover when out, and an equally adorable swaddle wrap.

Those nursing tanks I mentioned.  I didn’t discover them until I was pregnant with Nathan (baby #4), but I seriously live in them while exclusively breastfeeding.  They make things soooo much easier.

At home, I can wear just the tank top, so it’s simple to unhook to nurse as needed.  When out, I throw a shirt on over them and then when I’m breastfeeding in public (gasp! yes, I do that a lot) I have the tank covering most of my body and my shirt covering the rest, so even without a cover or blanket it’s pretty much impossible to see anything.  That makes me feel more confident.

I’ve tried a bunch of different nursing tanks…but my favorite are the tanks from GlamourMom.  A lot of other ones don’t fit that well since I am rather large-chested.  If they “fit” in most ways, there isn’t really enough room in the bra area.  And if there is enough room in the bra, they’re baggy.  The GlamourMom ones actually fit me.  They aren’t cheap, but they really last forever.  And they’re super soft, have an adjustable bra clasp inside, and are all-around awesome.

I honestly thought clothing dedicated to breastfeeding was stupid when I had my first baby.  Man was I wrong and I maintained that attitude for far too long.  I mean, I’ve now been breastfeeding for 7.5 years straight.  That’s not a short time!  And my babies exclusively breastfeed, or nearly so, for 6 to 12 months, so…yeah.  I no longer think it is stupid.  I think a few key pieces, like quality nursing tanks, are really necessary.  I also plan to explore the idea of a breastfeeding hoodie once the weather turns cooler….

Anyway. GlamourMom is actually giving away a $100 gift card today, so one lucky winner will get a chance to buy their own tanks.

A note on NuRoo and GlamourMom.  I approached them because I found their products and liked what I saw.  They did both send me these products for free, but they aren’t paying me otherwise to talk about them.

What Do You Really Need For Baby?

I’m a minimalist when it comes to baby stuff.  It would be hard to guess that we have a baby in the house right now — tiny diapers and clothes, a bouncer, and a pack’n’play (that we don’t even use right now) are the only signs.  I don’t go for fancy cribs, baby swings, big high chairs, and all of the baby items that are so cleverly marketed to us.  I did, with my first, but you just don’t need all that stuff.

However.  I do choose a few high-quality items that I know I’ll use often.  A large stash of my favorite cloth diapers was a must.  Nursing tanks were a must.  (I also bought some.)  A good, safe car seat was a must.  A good carrier/babywearing option (one for out, one for in the house) was a must.  That’s about it.

If you’re a natural mama like me, then you’re probably looking for similar things.  Choose carefully.  You’ll use these things a lot, and you want to know they will last, especially if you plan to have more babies.

I’ll be posting in this series approximately every two weeks.  Next up, we’ll talk about breastfeeding a newborn.  By that time, my fifth baby will be 6 weeks old, and we’re past the newborn “humps” that many mamas face.  I promise I’ll share what I’ve learned, including an interesting new breastfeeding technique that makes most struggles go away, fast.

What’s your best tip for getting through those early weeks with a newborn?