Is Water Birth Toxic, and Should You Avoid It? |
AD 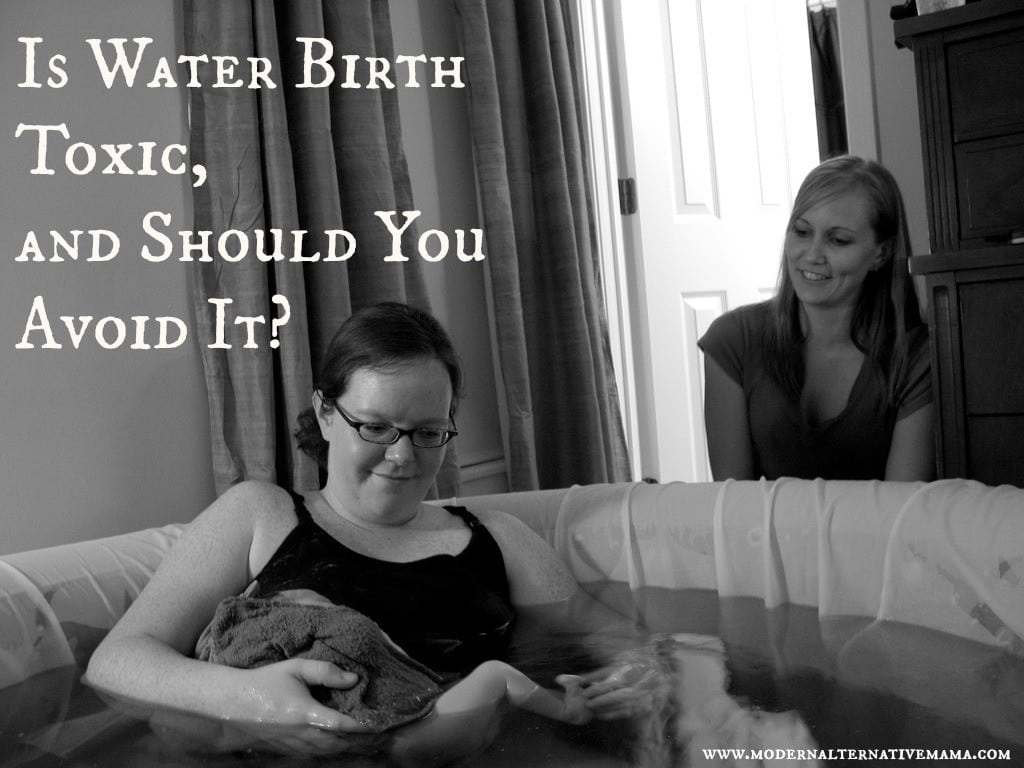 Is Water Birth Toxic, and Should You Avoid It?

Recently, I read a post over at The Healthy Home Economist: The Toxic Effects of Water Birth on Mom and Baby.  While I appreciate many of Sarah’s posts, this was not one of them.  The post was unfortunately poorly researched, and looked at one very limited aspect of a very complex issue.  I feel that moms really deserve to read the whole story, so I’m hoping to provide some context and better research today.

The claims in this article are effectively these:

Let’s take a look at each of these, one by one.

Is Chlorine in Tap Water Dangerous?

Yes.  Chlorine is a dangerous chemical.  It would be ideal not to ingest it ever, or to breathe it in.  According to a 2012 study, chlorine and chemicals containing it can significantly impact gut flora, which can lead to an increased risk of several illnesses, including auto-immune disorders.  That’s concerning.

In a perfect world, we’d avoid chlorinated water in the birth pool.  Some chlorine will evaporate out of tap water, if exposed to UV light and left for several hours — overnight.  This is unlikely to impact the water in a birth pool, though, which is normally indoors, not left to sit for more than a few hours, and covered.

However, the related claim that filtered water is equally dangerous just doesn’t hold up.

She cites a story out of Texas of a baby dying of legionella.  This was, first of all, the only case of a baby dying from legionella after a water birth in the U.S. — hardly compelling, with thousands of babies water-born each year.  Second, although the birthing tub and water source were tested after the baby’s infection was discovered, they were not found to contain the bacteria.  Which means it was never proven that this baby’s death was due to water birth at all.

Additionally, this water that was suspected to contain legionella (but was not found to) was well water — not filtered tap water.  There is no reason to believe that filtered tap water would harbor bacteria or would allow for easy bacterial growth, especially since water birth tubs are rarely used for more than a few hours.  The most likely bacteria in the water would be the mother’s own bacteria, not something pathogenic.  This concern, being unfounded, seems more like nit-picking than fact.

The next important claim is that water birth, even if not contaminated somehow, will impact baby’s gut flora.  This is supposed to happen through two methods: washing the flora out of the mother’s vagina, and washing the vernix off the baby.

But are these really valid concerns?

One study shows that, in general, water does not enter the vagina.  Thus, as the baby is making its way through the birth canal, it is able to have access to normal flora whether on land or in water — the water does not wash this away.  (It can and does wash away flora in the vulva, or the outside of the mother’s genitals, but most of baby’s access to flora will occur before this point.)

Honestly, a longer pushing phase (in or out of water) is going to lead to a much greater exposure to vaginal flora than a shorter pushing phase.  Some women push for an hour or two; some push for a minute or two!  Yet, we’re not harping on pushing duration as an issue in colonizing gut flora, even though it likely has more impact.

What about the vernix?

Vernix is an oil-based substance.  Therefore, water does not wash it away.  Remember, baby is bathed in amniotic fluid — which is water-based — in the womb and is covered in vernix.  So no, being born in water is not going to wash this important substance off your baby!

Vernix is important and you do want it to stay on your baby.  Rubbing your baby with a towel after birth can remove vernix.  So can a bath with soap.  Both of these should be avoided.  Baby can be patted dry with a receiving blanket or towel very gently, and baths should be delayed for at least a week, preferably longer.  (We wash only the diaper area as needed with soap — like if there’s a massive blow out — but otherwise we stick to water until baby’s mobile.)

Is Birth That Critical to Baby’s Gut Flora?

So here’s an important question.  Sarah says that if you have a water birth, that you’re basically negating all of the work you did to build up your gut flora during pregnancy.  But is that accurate?  Is the moment of birth that critical, that your baby’s flora is messed up forever?  (We already know it’s not highly impacted by the water, but supposing it were.)

It’s an incredible amount of stress for a mother to think that if her baby’s birth isn’t perfect that she’s messed him/her up for life.  But the truth is that many things impact baby’s gut flora, with birth itself being only one part.

Last year, researchers discovered that the baby is actually first colonized in the womb.  The amniotic fluid and the placenta are both rich sources of bacteria, and the baby swallows these and they can be found in the meconium.  Some of the studies showed that most of baby’s gut flora is not similar to the mother’s vaginal flora, meaning that they develop it from many sources.

Vaginal delivery does have an edge over c-section for the development of healthy gut flora, though, for a variety of reasons.  Researchers suspect that some of the biological processes that take place with a natural-onset delivery are absent with c-sections, plus many c-sections lead to delayed breastfeeding.

But, it’s also worth noting that another study found that bacterial colonization in a newborn (as measured in their bowel movements, which were frequent) varied from hour to hour in the first week or so after birth, and that this flora was similar to stool flora from whoever touched the baby most — typically, their mother and their nurse.  This shows that despite the method of birth, early establishment of breastfeeding and limited contact with people outside the family in the first week or two of life is wise.

It’s known that diet is the most critical part of the development of baby’s gut flora.  In the early months, this means that breastfeeding is ideal.  The differences in gut flora between a breastfed and formula-fed baby do disappear between 1 and 2 years of age, but the importance of breastmilk in protecting the immature gut has not been thoroughly studied.  It is assumed to be very important, though, and several studies point to long-term reductions in obesity, diabetes, and more among breastfed infants.

When a mother takes probiotic supplements during pregnancy and breastfeeding, her infant is less likely to suffer from eczema (study).  This implies that yes, it does matter how we take care of our gut flora during pregnancy and beyond!  (And this was true regardless of birth method or location.)

The point?  There are many things we can do to impact a newborn’s gut health.  Birth is not a make-or-break moment.  Taking probiotic supplements during pregnancy and breastfeeding, and otherwise caring for gut health, is important.  Early establishment of breastfeeding (preferably within the first hour after birth) and frequent skin-to-skin time with mom in the early weeks is also important to developing healthy gut flora.  Birth, while important, is not that critical (not so critical that it’s worth freaking out about, or avoiding water birth — which we showed earlier does not have a significant impact on flora transfer).

What’s the Deal on Water Birth?

We don’t have enough evidence, study-wise, to say that water birth is specifically beneficial.  But we also know it isn’t dangerous, as there has not been one proven case of neonatal death in the U.S. from water birth.  And we do know that water provides significant pain relief to many women, and reduces the need for epidurals and other birth interventions.  These interventions potentially have a far greater effect on baby’s health than water ever could.

If you’re interested in water birth, explore the option.  If not, no big deal.  It’s something that women who wish to do, should be encouraged to do.  It certainly is not “toxic” to either mother or baby.

If you do opt for a water birth, attempt to filter the water if possible.  We’ve been looking at a Berkey filter for our shower/tub for a while now (we already have one for drinking water).  If you’re unable, don’t worry too much — remember that there are many other things that more significantly affect your baby’s gut than the tub water!  (Especially if you regularly bathe in the water and will bathe baby in it — those exposures will matter much more, long-term, than a single, brief exposure at birth.)

Also remember not to rub baby roughly with a towel, don’t bathe baby with soap, and establish breastfeeding as soon as possible for optimal gut health.  There’s a lot more to be said on that topic, but we’ll leave it for now since the goal was mostly to explore the effects of water birth on gut flora. 🙂

Do you think water birth is toxic for babies?  Why or why not?