A Birth Story: When God’s Plan is Different from Your Plan |
AD 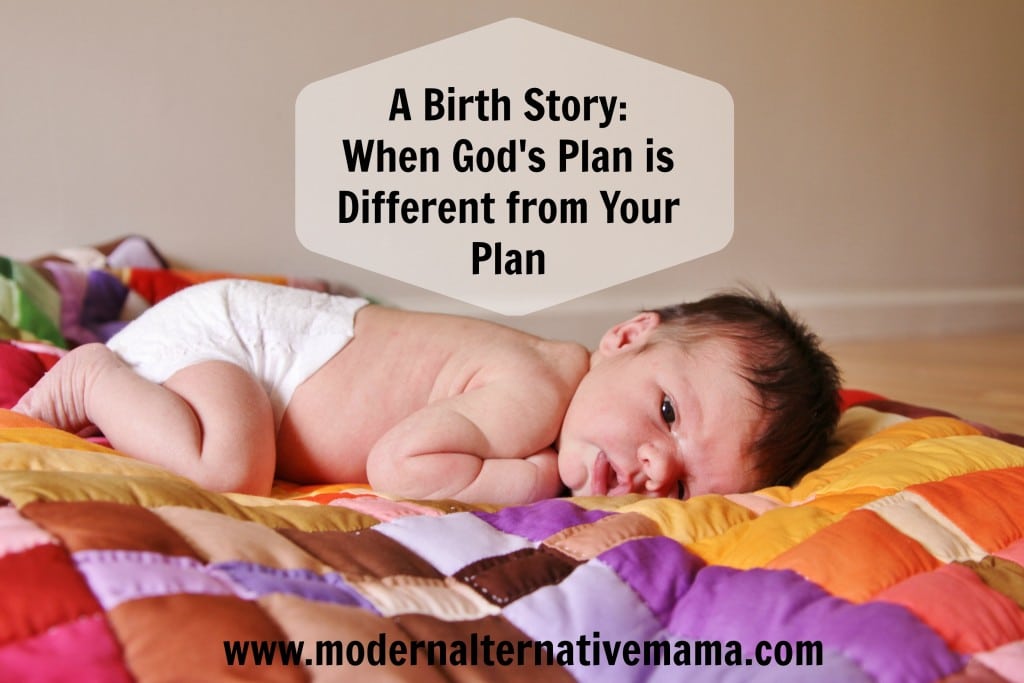 A Birth Story: When God’s Plan is Different from Your Plan

If you want to hear more about what I experienced in my first pregnancy, you can read about my first trimester. I never got around to writing about my third trimester, even though I had plenty of time. Here’s why.

I had been planning a natural birth at a local birth center from the moment I knew I was pregnant. We had a cross-country move in the middle of my pregnancy, but we had anticipated this all along and planned accordingly. I had a really healthy pregnancy with very few ailments, which I attribute to being active (water aerobics and walking) as well as a healthy real food diet.

At my 38-week prenatal appointment, I was told by the coordinating physician at the birth center that I would not be able to deliver there because my baby was “too big to safely deliver.” Imagine my devastation, not to mention disbelief…I had never even heard of a midwife risking someone out because of the size of the baby (isn’t that one of the reasons midwives are so awesome?).

It was a very scary and uncertain time, knowing that my baby would be arriving very soon, and not only were our plans completely changed, but we had to find a new obstetrician immediately. We were, however, blessed by an amazing, God-loving physician who is a strong supporter of natural birth. Seriously, we loved him and felt far more comfortable with him than we had with the previous midwife. It was easy to see God’s hand in our story, and I had two wonderful prenatal visits with the OB before labor started at 40w6d.

And So It Begins

On Wednesday, August 21, I woke up after only sleeping about 2-3 hours. For the life of me, I can not remember why our sleep was sooo bad that evening, but all day I kept saying “please don’t let it be today, we are way too tired.” I had a few contractions in the afternoon but assumed they were Braxton-Hicks.

At 8:00 p.m. my contractions started for real. They started slow, about 20 minutes apart and were very regular with increasing intensity. I was able to breathe through them but definitely unable to sleep. I eventually kicked my husband out to the guest room so he could sleep while I sat on the exercise ball and got in and out of the tub.

Around 6:00 a.m., I called my sister who lives two hours away and told her “Today is the day!” At this point, my contractions were around 8 minutes apart and my husband was having to help me through each contraction, pressing on my back, swaying with me, etc.

My sister arrived around 8:30 a.m., and we called the doctor. We talked about what hospital we would go to and when we would call him. We were so excited to meet our baby girl! But, right about that time, my contractions got weird. They didn’t decrease in intensity, but the frequency went all over the place.

Contractions would be 15 minutes apart, then 4 minutes apart, then 6 minutes, then 12 minutes. This went on. All. Day. Long. I did lose my mucous plug about mid-morning (so that was encouraging!) but I spent the day walking up and down our stairs, bouncing on the exercise ball, and trying to relax in the tub. I was so, so tired, as I had only slept about 4 hours in the last 48 hours, and I knew we still had a long way to go.

Heading to the Hospital

Around 6:00 p.m. we called the OB to discuss things. I knew that mentally I was on the verge of a breakdown due to exhaustion, and while I knew some progress was being made, I also knew that we were still quite a long ways from delivering a baby.

About 8:00 p.m., we decided to head to the hospital to get checked – I was insistent that I needed to know how far along I was. The triage nurse was pretty miffed that I had gone 41 weeks and had never been checked to see how far along I was. (Ha!) The nurse said I was 4 cm and about 80% effaced.

I talked to the OB again and we decided that we would walk for 2 hours, get checked again and re-evaluate. So we did. And during this time the intensity of my contractions increased, but the frequency was still all over the place. I had a total emotional breakdown, and when we went back to get checked (by the same nurse) she told me I was closer to 3 cm now!! Gahhhh! I knew I couldn’t go home, as we were approaching night number three with no sleep, and after much discussion and prayer, we decided to be admitted to the hospital and get the epidural so I could rest.

I received the epidural around midnight and I was so, so scared, but it was really a piece of cake and I hardly felt it. The anesthesiologist and my nurse were amazing, and my husband was so supportive. I did throw up pretty much immediately after receiving the epidural, which I had anticipated, and that was way worse than the epidural itself! They also put in a catheter and internal fetal monitor to measure the contractions. And then, I slept. I slept for about 2 hours and when I woke up I was ready to have this baby!

The nurse came in and said the doctor was on the phone. My contractions still were not increasing (seriously???? I had now been in labor for 30 hours). We discussed our options and finally decided to try a low dose of Pitocin to see if my body would react to it. This was really hard for me, as Pitocin was one of the things that was on my “really don’t want” list. But for some reason, my body wasn’t pushing this baby out like I thought it should, so we agreed to the Pitocin, and 3 hours later I was fully dilated and ready to push! (My OB said at the rate my contractions were coming I could have been in labor for 2-3 more days. My husband decided that we had gone past the point of pain and were now into the land of suffering which is why we decided to administer the Pitocin.)

I pushed for a little over 2 hours. It was SO. HARD. I had assumed after the epidural that the baby would just slide right out. Not the case! I vomited (violently) twice while pushing. My husband was right beside me the whole time, encouraging me and praying with me. My sister was also there (she was actually at the foot of the bed).

After pushing for about 2 hours I was getting very discouraged, even though the doctor was telling me what great progress I was making. It was hard to for me to tell, and quite frankly I thought everyone was lying to me! Towards the end of pushing, my sister would say “oh! oh! I see her hair!” when I was pushing, and that was so encouraging!

Right before the final push I started crying telling my husband,“I can’t do this!” and he and my sister and my doctor all yelled “yes you can!! You are already doing it!” On the next push, I pushed as hard as I possibly could and I heard my sister get so excited “oh!! oooooh! ooooooh!” while I delivered her head, then I took a deep breath and pushed the rest of our baby girl out! The doctor caught her and put her immediately to my chest and it was the most awesome feeling ever. Ever ever ever!!!

This was not the birth I had planned. But it was ok. I know that if I had been laboring at the birth center, they would have transferred me for “failure to progress/exhaustion” and I may not have been so fortunate to have an amazing, supportive OB. I think the last minute transfer would have been much more difficult for me to deal with emotionally than knowing in advance of where we would be delivering our baby. It was obvious to us that God’s plan was better than our plan, and we are so thankful for how He provides for us and always knows what we need better than we do! I still hope to have a natural birth with future babies, if God blesses us with them and if it is HIS will.

Have you had a birth story that didn’t go according to “your” plan?