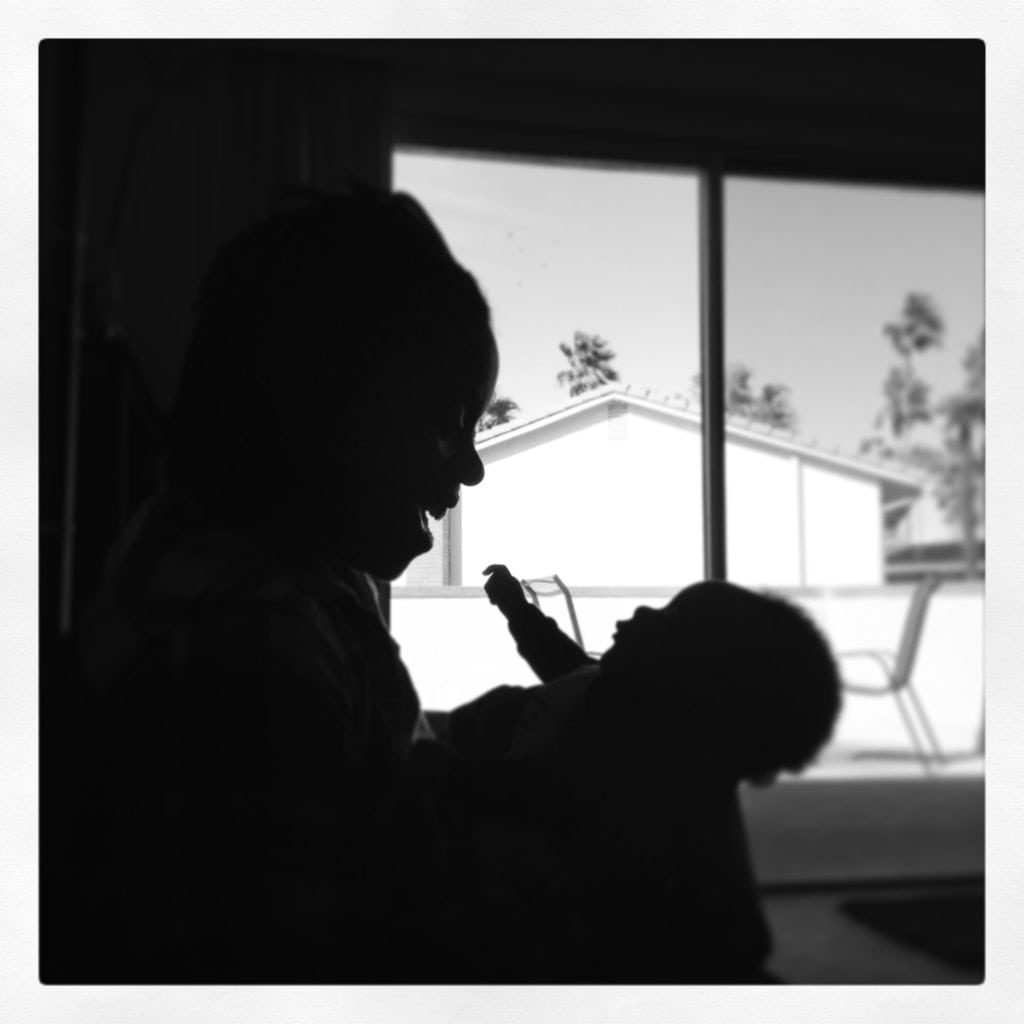 This birth story is from Chi Chi of This Hungry Hippo

My name is Chi Chi and I have been married to my husband for twelve years. We have three very vibrant and smart children; our first son is 8, our daughter is 6 and our newest little one is 3 months. Just before our eleven year anniversary I started asking (begging) my husband to PLEASE have another baby, just one more. It took some convincing but by the end of April 2012 I had a positive dollar store pregnancy test in one hand, while I fist pumped the other. Yeah baby!

I have to tell you, this pregnancy was completely different than the last two. This time around I devoured health and pregnancy blogs, and I talked to midwives and a very kind doula. I ditched the commercial prenatal pills, opting for fermented cod liver oil and a whole foods diet instead. I ate fermented foods, took probiotics, mixed my own herbs for pregnancy tea, avoided sweets, and was even adjusted by a chiropractor.

I was determined to actively participate in the wellbeing of our son as early as possible. I read tons of research on vaccines, antibiotics, and alternative methods. I was confident, I was prepared, and then—the hard part came.

I was at my 36-week appointment with my OB/GYN. I knew that since I was receiving prenatal care and would be delivering our son at this hospital (home birth was not an option with the insurance we carry), there would be challenges to having an all-natural and somewhat alternative delivery. This was the day I would be tested for GBS (Group Beta Streptococcus); this was the day I was NOT looking forward to.

I had tested positive with my previous two children and due to lack of knowledge, took the antibiotics because I believed I HAD to take the antibiotics. But through research, talking with my husband, and prayer, I decided to decline treatment but take the test and treat with natural remedies instead.

Immediately after informing my doctor I would decline antibiotics if I tested positive, he turned beet red and became very uncomfortable. He asked, “If your son contracts GBS and dies, are you going to be okay with that?” I was shocked and hurt; all I wanted in these last few weeks was calm.

Did he know how long it had taken my husband and I to come to this decision? The conversation escalated into a huge disagreement. He completed my 36-week checkup, swabbed me for GBS and urged me to, “…just have an open mind,” and then walked out and left me on the examination table in tears. I mean, downright ugly tears. “I was a horrible mom, how could I even think of not treating for GBS? I was a horrible mom, how could I wipe out our entire gut flora with antibiotics and not trust in God that everything would be fine?” These thoughts flip-flopped in my mind for the next few weeks as I prepared for the birth of our third child.

At 2:20 in the morning on December 26th, I felt a small but firm tug on my uterus, and at 2:22 I felt another. I woke my husband, took a quick shower, got dressed, woke the kids, piled in the car and headed off to the hospital convinced he’d be here in no time. In spite of all the excitement, I was still not at ease with the decision I knew I would soon have to make. Once admitted into labor and delivery, I sat down with one of the midwives to go over logistics and get paperwork out of the way.

After a long talk about the pros and cons of treating for GBS and with my doctor’s words still looming over me, I decided I would get the antibiotics after all. Believe me when I say it was a very difficult decision to make. Either way, I knew there would be some worry involved, but at this point, nearly 3 hours into labor, I just didn’t want to think about it any longer.

Fast forward to 12:30pm, much tossing and turning, walking and rocking later and baby Ezra still had not come. I was lying down at this point, completely exhausted, when my nurse came in and announced she was changing my antibiotic, as the new antibiotic was better at treating the “type” of GBS I had. My husband and I were puzzled, but sleep depravity and the death grip I had on my husband’s arm as I writhed in pain, trumped our need to know more at the time.

Baby Ezra was born at 12:59pm, just a half-hour later. He weighed 8.2 lbs. and was 20.25” long. Outside of the antibiotics, Ezra’s birth was completely unmedicated. I did not tear at all, and besides being physically spent, all was well—or so we thought. At approximately 9:30 that evening, the pediatrician on call came into our room to inform us that Ezra’s blood culture had come back, “Not completely abnormal, but not normal.” He went on to inform us that Ezra had been exposed to GBS because the original antibiotic I was given, was not at all effective in treating GBS, and the correct antibiotic had not been in my system long enough to have any effect on the GBS. Somehow the admitting midwife had not completely read my chart and missed the lab’s instructions as to the appropriate antibiotic to give. Our son’s blood culture would need to be watched for the next 24 hours for any signs of growth, which would indicate infection.

Since there was no growth at 24 hours, we were allowed to go home. The lab continued to watch the culture for any signs of growth for the next five days. Those five days were the toughest. They were days full of tears, anger, and regret. On day six, we finally got a call from our pediatrician’s office, indicating no growth after five days. We were ecstatic and completely relieved.

In the weeks following our experience and after taking time to physically heal, I found the words and the will to write a sincere letter of complaint. First and foremost, I asked for an apology. I also wanted assurance that the admitting midwife, who made the error, would be spoken to. This was difficult for me because outside of the hospital’s mishap, this was by far the BEST birthing experience I have had. I had a seasoned midwife who helped guide me through the last hours of labor, who said just the right thing at the right time to help me push through the pain of contractions. The nurse who stood by my side, opposite my husband, and held my leg up to push when I was too exhausted to do so on my own, was amazing.

However, I could not allow them to get by with such a huge mistake. In addition, and especially important to note, is that after all the pressure and guilt my OB/GYN laid on me to take the antibiotics, I didn’t need them. Ezra did just fine, but because of his exposure to the antibiotics, we are working diligently to build up his immune system. I am disappointed with myself for second guessing God’s answer to my prayer, and was swiftly reminded that I, we, our beautiful baby boy, are all covered by God’s Grace.

There is a silver lining, though. Just last night I received a call from the head of maternity where I delivered. He assured me the midwife had been spoken to, and that she was also very sorry for her mistake. Furthermore, and this is the best part, because I used my voice, because I wrote my letter, this experience is not only implementing change within the hospital that I delivered, but it will (prayerfully) incite change throughout all of this provider’s northern California hospitals. Amen! We now have a thriving, healthy and quite chunky three-month-old, whose name means “help,” in Hebrew. If he only knew just how much he has helped his mama and maybe other little babies!

“If your son contracts GBS and dies, are you going to be okay with that?”

Those words are forever etched in my heart and I replay them over and over again. What conventional doctors and caregivers need to understand is that we (alternative mamas and papas) are not being alternative just for the sake of being different—that we make the choices we make for the sake of our families and not to discredit, demean, or anger them. That our decisions, whether big or small, are well thought out and well researched. That we as parents do in fact sometimes make mistakes, but we would never, NEVER, intentionally harm our children.

If you are pregnant and facing a situation similar to mine, I encourage you to trust your heart. Do your research, ask questions, and do not be afraid to speak up for yourself! I did not have the financial means to have a home birth, if you do, that is wonderful. For those of us who (for whatever reason) plan to birth in a hospital, my number one piece of advice is to use your voice.

Chi Chi is the mother of 3 beautiful children and the voice behind This Hungry Hippo, a blog she’s using to make up for all those lost years of scrap booking.