How to Clean Cloth Diapers |
AD 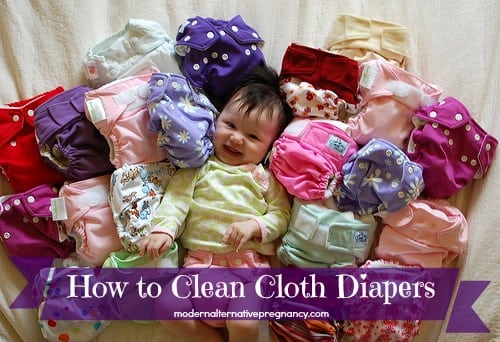 How to Clean Cloth Diapers

Five years ago, my husband and I were on a mission to get out of debt, always on the hustle for how to make 10000 fast for next few months of bills. We had two children, both in diapers and were expecting a third. After doing the math, we knew that there was no way we’d be able to attack our debt, pay our bills and buy disposable diapers x3.

I spent a lot of time reading about cloth diapers (yes, I spent waaaaaay too much time on Diaper Swappers) and finally settled on a kind that I liked (which only took me two years).

After all of that type spent researching the perfect kind of cloth diaper, I found myself at the machine wondering what the protocol was for getting these poop-catchers to come clean.

If the cloth diaper-wearer went number #2, you know that you need to remove the poo before you throw it in your cloth diaper pail. When we started cloth diapering, we lived in a house that we owned, so my husband installed a diaper sprayer (not the fancy kind, but a diy kind a friend told us about). While it has the potential for some major ick-factor (think stuff being sprayed on you that you do not want sprayed on you), I loved it.

Since selling our house and moving into a couple of rentals, we’ve gone without the sprayer (mostly because our other one wouldn’t fit the new toilets and we were too cheap to re-invest in a sprayer).

The alternative? Dunking. As in, empty the poo in the toilet and pray that all of it just rolls out. When it doesn’t, you grab an unsoiled part (pray that there’s one of those, too) and dunk it in the toilet to get as much poo off as possible, drop the diaper in the pail and vigorously wash your hands.

I remember one time hearing about a scraper thingy, but that just grossed me out, so we never used it.

Rinse Cycle with Bac-Out or Vinegar

When the time comes to actually clean those babies, er, diapers (which may be every day or every few days, depending on how many diapers you have in your stash and how many bums are sporting cloth diapers), just empty the contents of the pail into your washing machine and turn on the rinse cycle. Many advocate rinsing in hot water, which I did about half the time (I’m frugal and typically use cold water for washing everything).

To this rinse, add a big squirt of Bac-Out, the concentrated natural enzyme cleaner finally put an end to my stinky cloth diapers. If you don’t have that, you can add some vinegar to help things out.

After the rinse cycle is done, it’s time to wash.

When we were cloth diapering full-time (meaning nobody was learning to use the potty and/or there were multiple kiddos in diapers), I would do a cloth diaper load every few days. When we were always washing diapers, I just used cold water.

However, when it got down to a once or twice per week thing (thank you, potty!), I wash them on hot because I’m not so worried about it making using up too much energy on heating water for poop-catchers. My mom told me once that washing with hot water gets things cleaner by killing bacteria or something.

Anywho, now you’ll add your detergent and start the wash with whatever water temperature you like. For a long time, I used Rockin’ Green, which was specifically designed for cloth diapers. However, in an effort to further lower our budget, I started making our own laundry detergent. It does the trick just fine.

When I wash diapers, I make sure there’s plenty of water in their to circulate things nicely. I made the mistake of not using enough water once. Let’s just say, they don’t come as clean as you’d like.

(Now, if you’re reading this and you’re switching to cloth and/or you don’t want to do separate loads for your diapers, just know this: My fourth child uses the potty half the time. And for two months last year, he used it 100% of the time, so in a celebratory gesture, I got rid of the diaper pail bucket. Then he learned how to talk and went back to soiling his pants. When he soils the diaper, I just throw it in the washer (after dunking if it’s poopy) to await other clothes – I do run a small rinse load if there’s poo. Washing your cloth diapers with other clothes won’t hurt anything.)

I use essential oils like they’re going out of style, so to my wash load I also add a few drops of both tea tree and lemon essential oils. These oils are great for killing bacteria and getting things nice and clean.

Like other laundry, the best thing for your cloth diapers (and the environment) is to hang dry them. However, if you notice the PUL of your covers starting to leak, use the dryer to reseal them.

If that’s not an option or you think that maybe you might be the kind of mom who sort of forgets to do the laundry and then does it in a mad rush while hoping the baby doesn’t soak through the t-shirt you wrapped him up in, then yeah, drying is fine.

If you use a cloth diaper service, forget everything I just said and give thanks that someone else is handling this for you.

What tips do you have to add about washing cloth diapers?