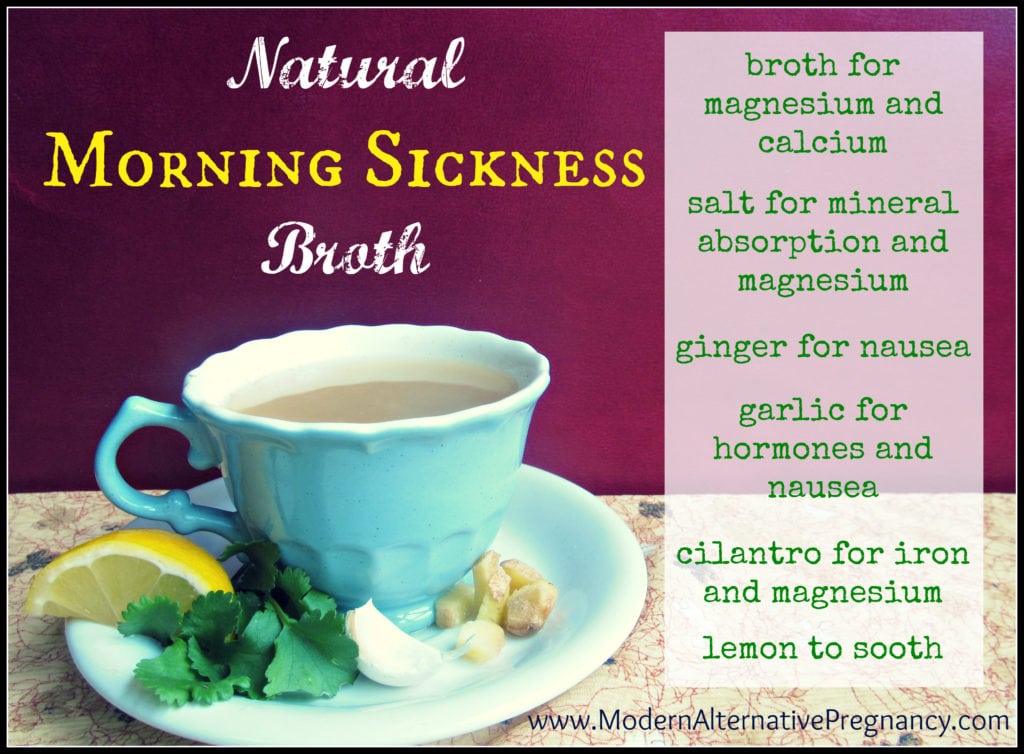 If you have been around real food/natural pregnancy type blogs you have probably heard that broth can help with morning sickness. Unfortunately that remedy seems a little easier said than used. A lot of people, myself included, have trouble drinking straight bone broth. Even when I add salt, which is important to get the most out of it, it is a little wearying drinking enough to help.

After 22 weeks of morning sickness I knew it was time to try that time-honored remedy – but to beef it up a bit on flavor, making it easier to drink, and use flavors that made the broth THAT MUCH MORE effective.

At 21 weeks I started taking liquid calcium magnesium which helped, but not completely. I used this broth to help get rid of any lingering problems. I came up with it one day when I had hardly been able to eat- despite supplementing. This instantly settled my stomach. I just wish I had come up with it earlier!

This broth helps by both attacking causes of morning sickness-  magnesium deficiency, protein deficiency, imbalanced hormones, etc. as well as being soothing right away through the use of lemon and ginger.

I think next time I will get a good thermos so I can can keep larger amounts of this hot and ready to drink. This is the thermos we got to send bone broth with Mark to his work as he only has access to microwaves for heating up food. I want to get one too now even if I have a stove available. In general I plan on drinking more broth because we are on GAPS and also because I do have a magnesium deficiency, this is a tasty way to do that even without morning sickness.

The Ingredients, and Why They Help

Broth-  There are many reasons broth helps with morning sickness- it helps you stay hydrated, it is a easy to digest form of protein (protein deficiency can cause morning sickness), it is easy on the stomach, and is a source of magnesium, calcium, and other important nutrients.

Salt- In order to get the most out of broth it needs to be taken with unrefined salt, such as Real Salt or a good quality Celtic Sea Salt. Unrefined salt aids in the digestion of vitamins and minerals and is in of itself a source of magnesium and other trace minerals. If it is super refined (like table salt) it mostly just adds taste and raises your blood sugar, but unrefined salt does not really pose that risk as it has the other minerals in it to help digest it properly.

Ginger- Ginger is an old remedy for settling stomachs, and it works! This way is great for those who do not want to have the extra sugar of eating candied ginger, or do not like the spiciness of ginger tea. I like ginger tea all right, but this helps so much more and I tend to prefer savory foods. Also, it adds an amazing FLAVOR to the broth making drinking it all the more relaxing and enjoyable.

Lemon- This is both for flavor and for the stomach settling and soothing effects.

Garlic- I added this mostly for flavor, but garlic is an all around good guy that helps with many problems. It is not as effective as ginger usually- but it does help with nausea. Another great benefit is it helps with imbalanced hormones.

Cilantro- Did you know that cilantro is a great source of magnesium, iron (and since iron supplements can cause nausea, that is good!) and helps detoxify your body- a potential cause for morning sickness?  Me either. I added it for flavor, but decided to look it up and sure enough those are the three main health benefits of it. So, bring it on. I have been craving cilantro like crazy this pregnancy, maybe that is why?

Honey- There is not really enough honey in this for it’s soothing effects, so it is mostly for flavor. It is not to make the broth sweet, just to cut the acidity, sharpness, and slight bitterness of the other ingredients.

This is steeped like a tea, so bring your bone broth to a boil. Add the rest of your ingredients, except the honey and lemon, to a bowl, jar, or pot. There is barely any honey, but you might as well get the benefits of it being raw.

Pour the hot broth over the ingredients and let steep, covered for 10 minutes.

Strain away the solids and stir in the honey and lemon; slowly sip and enjoy.

Note: you could probably substitute the garlic, cilantro, and ginger for high quality dried versions (use less, about 1/3) as when you are feeling sick can make chopping even a small amount of garlic and ginger hard. It will not be as nutrious but should help.

Have you ever had trouble with morning sickness? What helped you?