You Want to Stick that in my Baby Where!? Informed Consent in Newborn Procedures |
AD 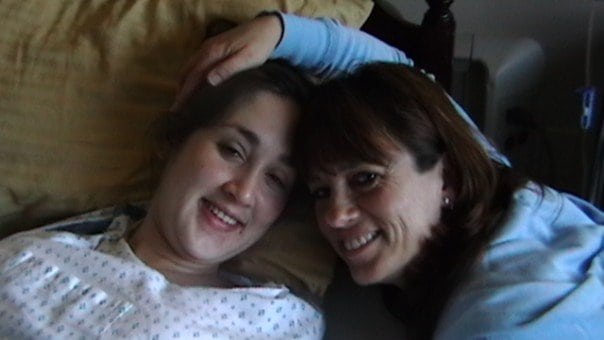 You Want to Stick that in my Baby Where!? Informed Consent in Newborn Procedures

With my first son, I didn’t explore my options, I didn’t research, and I trusted that if I want to have a natural, unmedicated birth all I would have to do is tell the medical staff and they would all smile and be proud of me. It was going to be a beautiful, bright-hospital-lights-on-my-crotch-in-my-open-in-the-back-hospital-gown-knees-in-my-throat-bland-walls kind of moment during which I was going to look like a GODDESS!

Pausing for the appropriate amount of laughter… yeah… so maybe not so much a ‘goddess’

Hi, my name is Jaime, and I am guilty of being a poorly informed patient.

I’ll save that story for another post, though. Because, what’s worse is that although I knew I wanted this natural and unmedicated birth experience, it never even occurred to me that I should care what would happen to the baby afterwards.

Certainly you’ve seen the shows – Crazy delivery room scene, baby whisked away to a warmer, wrapped up like a little sausage and kept in the nursery so mom can ‘get some rest’. They paint a scary scene where if they don’t do ‘stuff’ to baby, nothing will be ok. And even worse, giving birth is going to be so hard that it’s better you just don’t have baby at all. In fact, they’ll schedule your feedings for you. For your convenience. There are so many factors that will determine what procedures are standard – the state in which you live, the location you choose to give birth, the type of care provider you choose. But, ultimately, no matter what, the care you and your baby receive should be a choice. Here’s a list of procedures that are pretty common in newborn care, and what you should know about them.

So, obviously at some point the baby is going to become detached from the placenta. But, did you know that it doesn’t have to be the immediately after birth?

When you cut a baby’s umbilical cord in the moments just after birth, you are cutting of up to ONE THIRD of its blood supply.

Of course baby will begin to eventually produce more blood to make it up, but in those first moments of life, after immediate loss of its lifeline, baby is likely to appear distressed and not well, which could lead a whole other string of interventions. Penny Simkin has a great visual representation of this.

Some also choose a Lotus Birth in which the cord is kept intact until it naturally separates from the placenta over the course of many days.

The eye ointment is to help prevent eye infections and conjunctivitis that can cause blindness after birth. Thing is, the bacteria that causes the blinding infections are from chlamydia and gonorrhea. As for other, less serious forms of conjunctivitis, you know is a really great treatment? Breast milk. Additionally, the bacteria that causes these infections are also transmitted through the vaginal canal, so use after a csection is highly debatable. If you are in a high risk group for STDs, or if you are unsure if you have an STD, it’s always safest to get tested.

Babies at the greatest risk for Hepatitis B are those with mothers who have the disease.  Although the CDC considers the HepB Vaccine to be relatively safe, in recent years, a lot of criticism has surfaced about adverse reactions to the vaccine.

According the CDC Fact Sheet, the risk group for Hepatitis B is those who often come in contact with bodily fluids, including those working in the medical community, those with immuno-deficiency disorders, people who do not practice safe sex, and those who are intravenous drug users. In other words, unless you, the parent falls into one of these categories, your baby is not likely to be considered at risk.

Vitamin K is a naturally occuring vitamin in humans that helps the blood to clot. Most newborns are born with insufficient levels of Vitamin K, but only a small percentage are born with levels so low that they are considered to have Hemorrhagic Disease of the Newborn(HDN). This affects approximately .25-1.7% of newborns and there are specific factors to babies who are at high risk of being in trouble.

Without these specific risk factors present, it is debatable whether or not babies should be given the injection. For babies with normally low levels of Vitamin K, breastfeeding mothers can make sure that they are eating a healthy diet full of leafy greens and feeding on demand to ensure baby gets all the Vitamin K it needs.

Ultimately, if you are concerned about your baby’s Vitamin K levels, but are wary of giving your fresh new baby a shot, there is an oral alternative that is also highly effective.

Note from Kate: There is also some research to show that babies whose cords are not cut and clamped until after they have stopped pulsing are not actually deficient in vitamin K.  The original “babies are deficient” research was done in the 1950s, when moms were put under twilight sleep, had their babies forcibly dragged out, and the cords cut immediately.  Due to the highly interventive nature of this birth, and the trauma and drugs given, the babies were at much higher risk of hemorrhage.  However, most new research shows that babies who are born under typical circumstances — even those with minor trauma, such as lengthy pushing or use of forceps — will do fine if the cord is left intact.

The shot itself also has been linked to childhood leukemia and other issues, because it contains such a massive dose and other additives.  There are oral vit K preparations available if it is decided that baby really needs something.  However, mom using alfalfa tea or supplements or eating lots of leafy greens in the final weeks of pregnancy usually ensures that baby will be fine. Immediately following birth and five minutes after birth, babies are given an APGAR test, as well as several observational tests to ensure baby’s joints are ok, and there are no abnormalities of major organs. These are not interventative, and can be done in a gentle manner, and mom can request to have these tests done by her side, or with baby on her chest or at the breast. Caregivers will perform several other observational tests to ensure the baby is measuring in a certain and healthy range. Additionally, they will make sure that the baby doesn’t have any dislocated joints or abnormalities of any major organs.

Again, there is no reason that any of these things cannot be done while the baby is immediately around the mother. Also, if there are any observations that cause alarm for the doctors, it is your right to know and understand those concerns before treatment is administered.

The March of Dimes recommends babies be tested for about 29 metabolic and genetic disorders. The heel stick test is a slight puncture in your baby’s heel to draw blood for analysis of these diseases.

Research these diseases and know if you are at risk for some of these through family history. Here is a great, in depth resource for the disorders. If you feel like it is in your best interest to have the heel stick done, baby can always be at the breast to ensure better soothing than if he were on a warmer. After all, mama is a baby’s best warming pad!

Note from Kate: This test is usually known as the PKU test.  If PKU is not caught early it can lead to mental retardation and death.  If it is, a special diet can be chosen and the baby can thrive.  It is very, very rare.  This test is best performed when baby is 3 – 4 days old in a pediatrician’s office because it is more accurate once baby has begun receiving breastmilk instead of just colostrum.  This is why hospitals will not do it until the baby is a full 24 hours old.  If you opt for a home birth, a visiting nurse may come to your home when baby is a few days old to perform the test.

Perhaps one of the most highly divisive of all the newborn procedures, circumcision has vehement advocates on both sides of the issue, but trends are showing it is on the decline.

Note from Kate: Recently, the AAP came out to actually recommend neonatal circumcision.  This is not a position that Modern Alternative Pregnancy shares.  We do not feel that the evidence is sufficient to recommend circumcision for medical reasons, and do not believe that it should be considered by all parents.  Please do your own extensive research into this procedure before agreeing to it, and consider waiting until the baby is 8 days old, at which time newborns better handle the procedure.  However, know that complications from circumcision kill about 100 babies per year, and that many more end up with infections, regrowth of the foreskin, and other complications.  This is a cosmetic procedure that needs to be very carefully weighed.  There is also the issue, for many parents, of “his body, his choice” — the idea that the infant ought to have some say in whether his body is unnecessarily surgically altered.  There are various religious reasons for this decision too.  It is not one to take lightly.

I know – it’s overwhelming and there are a lot of decisions to be made about the care you and your baby receive! If you don’t feel like you can navigate the choices and options on your own, hiring a doula can be the best tool to help you make informed decisions about your care.

Did you face resistance when it came to your newborn’s care? Did you feel equipped with the tools to make informed decisions?