Normal Maternity Tests: Do You Have To? |
AD 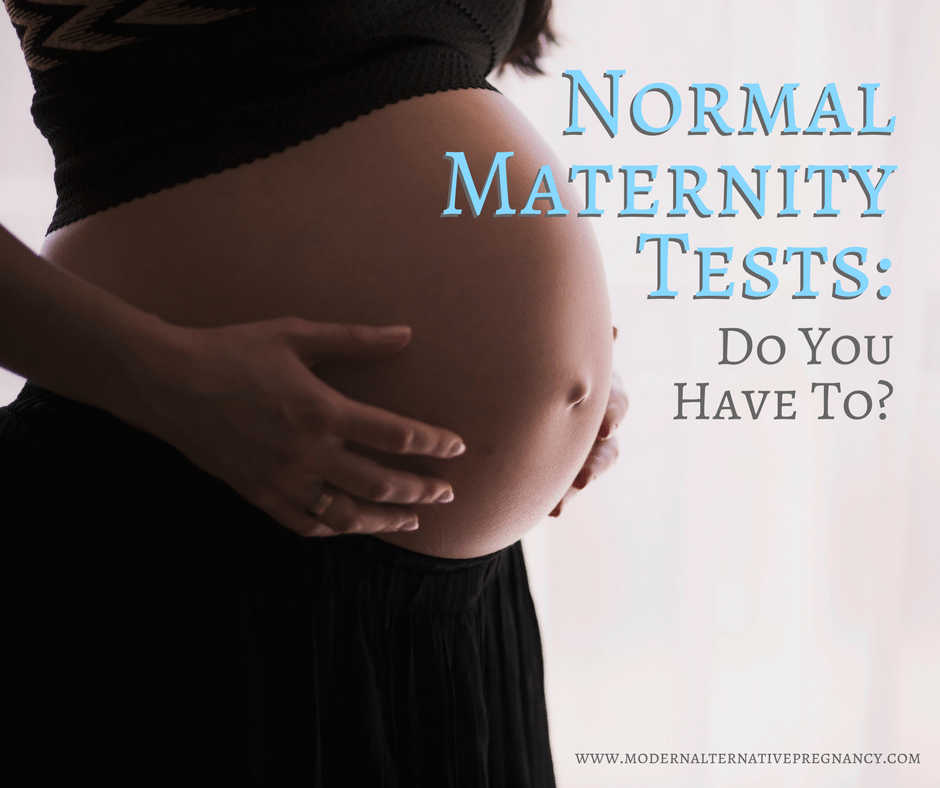 Normal Maternity Tests: Do You Have To?

Do You Have To Take Maternity Tests?

When you’re pregnant, there are many different tests that are fairly standard for most OBs and some midwives.  Do you have to take these maternity tests?  What are they for?  Who should seriously consider them?  And what happens if you want to refuse?

Women are subject to many tests during pregnancy.  These include the following (and possibly more; not all women will have all of these).

Most women are given blood tests at their initial visit and their 28-week visit.  The first is to check for STDs, anemia, immunity to rubella, and a general blood panel (sugar, creatinine, etc.).  The second is specifically to check for anemia.

Many women are given these at each visit.  These are to check for the presence of protein or sugar in the urine, which could be indicators of pre-eclampsia or gestational diabetes.

A woman’s blood pressure is checked at each visit to make sure it is in the safe range.  Consistently high readings raise the risk for pre-eclampsia.

Some swelling in the legs can be normal in pregnancy (but is usually caused by dehydration, lack of exercise, etc. and easily remedies).  Excessive swelling can be a sign of pre-eclampsia.

Both mom’s and baby’s are checked, to make sure they are within the normal range and strong.  If either is too fast or slow it can be an indication for further testing.

This is to check the fundal height of the uterus in cm (which should roughly correspond to the number of weeks pregnant a woman is after 20 weeks), as well as the position of the baby and the placenta.  It can be an indication if a baby is posterior or breech or otherwise in a bad position for delivery.  It can also be an indication that the placenta is poorly placed and could hinder a safe vaginal delivery (which may require follow-up testing).

Most women are offered internal exams at their first visit and their last few visits.  The initial visit is sometimes for a pap smear and also to check to see if the uterus “feels” pregnant.  The final visits are to check for dilation and/or effacement, to see if the body is “preparing” for labor.

This is a third blood test, taken around 16 weeks, to check for potential genetic abnormalities.  It can’t give an accurate result, only the statistical chances that something is wrong based on the results.  If the chances are high, then follow-up is indicated (usually amniocentesis).

This is an ultrasound that is done around 11 – 12 weeks that checks for thickening of the neck folds, or the “nuchal fold,” which may indicate the presence of Trisomy 21 (Down Syndrome).

Ultrasounds are usually offered at around 8 weeks and 20 weeks, and women who are high risk may have one nearly every visit.  These are to check on baby’s growth and development, position, position of the placenta, and a number of other possible abnormalities (for example, if there is a heart defect or the lungs aren’t developing properly).  The most common use is the 20-week ultrasound to measure fetal growth and do a check for major abnormalities.  It may also be used to confirm a multiple pregnancy.

This is a genetic test where amniotic fluid is drawn out of the uterus, and fetal cells are checked for any abnormalities.  It can usually diagnose any genetic defects before the 16th week of pregnancy.

This is a common test at 28 weeks, where women drink a 50-mL sugar solution and then have their blood sugar checked one hour later.  Should they fail this, they go on to a 3-hour fasting glucose test where they drink a 100-mL sugar solution and have their blood sugar checked each hour for three hours to watch how it drops.  Women who fail this are diagnosed with gestational diabetes.

Group B strep is a bacteria that naturally colonizes the vagina and anus of some women and it can come and go.  A swab is used around 36 – 38 weeks to check for the presence of this bacteria.  Women who test positive are usually given IV antibiotics during labor to prevent their newborns from becoming infected.

This is usually offered to women late in pregnancy if their babies are not moving well or if they are past their due date.  It checks to make sure the baby’s heartbeat is strong and that s/he is moving well, indicating that baby is healthy.  “Failing” a non-stress test usually results in another one a day or so later, and another fail usually results in an induction or c-section.

This is not an exhaustive list of tests that women may face during pregnancy.  These are common tests for women with low-risk or moderate-risk pregnancies.  If you are high-risk, you may be subject to all kinds of tests that are not listed here.

Are These Maternity Tests Necessary?

The tests that I would personally consider necessary, or at least safe enough not to worry about including:

These tests are non-invasive and pose no risk to the baby or to the mom.  They can indicate a need for further testing by forming a picture of a potential problem.  The anemia blood test is slightly invasive (finger prick), but anemia in late pregnancy can seriously increase your risk of hemorrhage during birth.

Some women with uncomplicated histories may choose to forego some or all of these tests (for example, women who are choosing unassisted birth), but there is no risk involved in choosing them.

The Doppler is an interesting issue.  A Doppler is ultrasound.  It is potentially dangerous to the baby and not something to be used indiscriminately (which now happens, thanks to at-home Doppler devices used frequently by eager new parents).  That is irresponsible.  Using a Doppler very briefly around the 12th week of pregnancy for mother’s peace of mind may outweigh the risks, but using one frequently or at every visit is not a good idea.  Past the 20th week of pregnancy, a fetoscope can be used to safely hear the baby’s heartbeat.

Maternity Tests that I would consider mostly “non-invasive” but potentially problematic would be:

These tests are typically harmless to the baby but may cause problems for the mother either directly or because of care decisions that are made based on results.

The basic blood test could lead to recommendations for an MMR shot (harmful in pregnancy), or to iron supplementation (ferrous sulfate, which is poorly absorbed and often makes women very sick), etc.

Late in pregnancy, internal exams may be used to make decisions about whether an induction is necessary, or whether a woman will ‘probably’ go into labor sooner rather than later.  However, effacement and dilation can cause a woman to feel needlessly excited or depressed, depending on the result, and the state of things internally is not related to how soon labor will begin.  It is possible for women to have cervixes that are high, closed and babies who are not engaged and deliver mere hours later.  It is possible for women who are dilated to 6 and mostly effaced with babies engaged to walk around for a month without going into labor.  Women often feel that progress or lack thereof is indicative of labor; it’s not.

Internal exams also allow foreign bacteria to be introduced, increasing the risk of infection.  They also allow doctors to do questionable procedures, like “stripping the membranes,” which can increase the risk of infection as well as potentially prematurely breaking the water.  Sometimes doctors will do these things without a woman’s consent.  The easiest way to prevent it is not to consent to an internal exam in the first place.

The gestational diabetes test usually leads to heavy monitoring late in pregnancy, special (not so healthy) diets, and early induction due to a suspected “big” baby.  If you do not eat sugar or refined grains anyway, there is no need for this test in most cases, especially if you have no history of diabetes in your family and are at a normal weight.  This is even according to ACOG guidelines.

The Group B strep test is controversial.  There is evidence to show that babies born to GBS-positive mothers have a very tiny risk of infection and that the risk of yeast/thrush and gut damage from the IV antibiotics is actually greater.  Mothers who test positive are usually pushed into antibiotics regardless of how rapid their labors are when their water breaks.  (Long labors where the water breaks early significantly increase the chances of infection.)  This is one to be careful of.

Non-stress tests may be rough depending on how they are performed.  Some women are simply asked to drink a sweet liquid to get the baby moving (sometimes orange juice).  Others have their bellies physically manipulated.  Know how your care provider will perform the test ahead of time. The following tests I consider unnecessary for women with normal, low-risk pregnancies (not high-risk women):

These tests are mainly to check for genetic abnormalities in your baby.  If you know you are high risk (because of familial history, not just because you’re an “older mom”) you may choose to take the tests.  They can, unfortunately, cause false positives — especially the bottom two, that are just ‘screening’ tests — and a lot of extra worry and stress.  Plus, for many families, the results of these tests won’t change their decision to carry the pregnancy, so they feel there is no point.

Others feel they’d like to know if there is an issue so they can be prepared, if needed, for the special care required at birth.  Some would choose a different delivery location, specialists on hand, etc.  A few very rare issues can be fixed via surgery even before birth, and this is another consideration for some families.

Ultrasound absolutely does come with risks, though, including potential brain damage to the baby, miscarriage, and intrauterine growth restriction.  The chances of a defect that may be found and remedied during pregnancy are very, very, very rare; much more rare than the possibility of harm from a routine ultrasound.  In my opinion, routine ultrasounds are not necessary.  This is a great source showing lots of peer-reviewed, published studies on the harm from ultrasounds.  Here are more studies.

An ultrasound should only be considered in high-risk situations in which another method of assessment is impossible.  Manual palpitations are often preferable, especially from a skilled provider, and come with no associated risk.

This is very brief look at common maternity tests, and we’ll cover many of these more in-depth at a later time!

If you do not want to take any of these tests, you do not have to consent.  You should be aware that some doctors or midwives will kick you out of the practice for refusing.  It is a good idea to find a practitioner who generally agrees with your philosophy on pregnancy and birth anyway so that if something does go wrong you are on the same page and you can trust his/her advice.

Simply say “I do not consent to that.”  Later this month we’ll talk about some other responses to pressure to consent!  Always remember that it is your body and your baby, so you make the final decision!