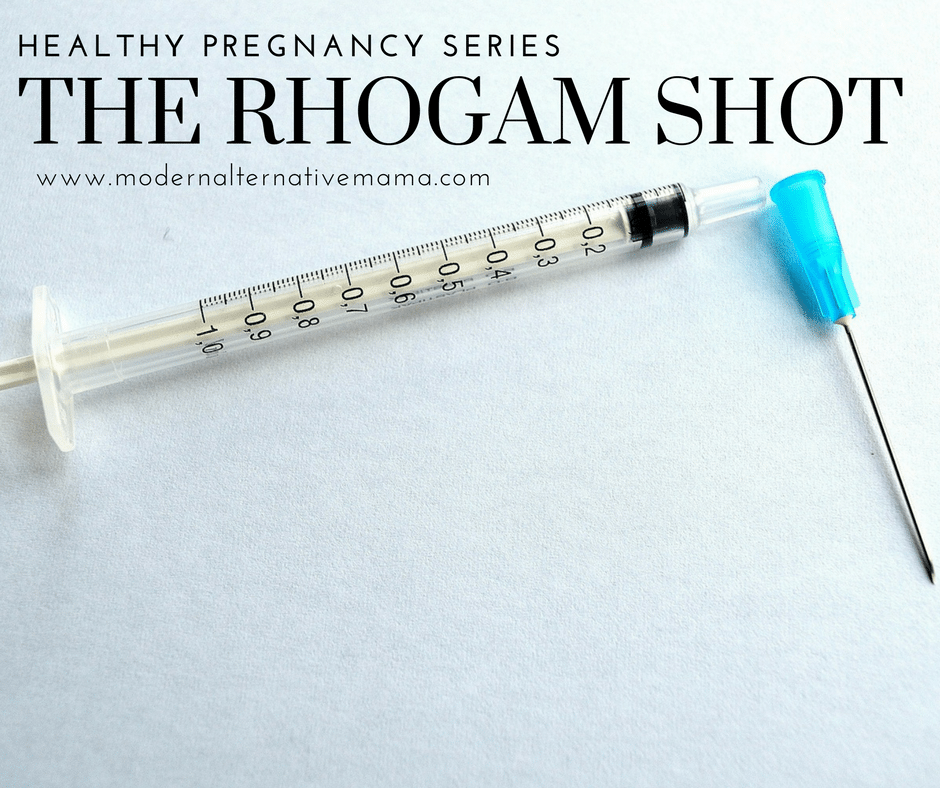 Psst…head over to Keeper of the Home to read an interview I did about Real Food Basics!

This is a topic I was asked to discuss when I did my reader survey recently.    And it’s an important one.  Some women will be told that they need to have a Rhogam shot during their pregnancies.  Women need to understand what it’s for, the risks and benefits, and other issues associated with this shot.

First of all, the Rhogam shot is for women who have RH negative blood.  That is, for example, you have “O negative” blood type.  Being RH negative simply means that you don’t have this factor in your blood, while those who are RH positive do.

Getting RH positive blood mixed in a person who is RH negative can cause serious repercussions in pregnancy.  Blood mixing can potentially occur during pregnancy if a woman is carrying an RH positive baby and some type of trauma occurs.  The Rhogam shot was created to protect against this mixing and the subsequent illness that would occur.

But is it necessary?  Is it safe?

First of all, there is one situation in which a provider may recommend a Rhogam shot to you, but in which you should always say no.  If you are Rh negative, and your partner is also Rh negative — you do not need a Rhogam shot!!  There is absolutely zero chance of your baby being positive if both parents are negative because it’s a recessive trait.  Your doctor may still tell you to take the shot (just in case, you know, you’re lying about who the father is; or maybe they don’t understand how this works), but just say no.  There is absolutely no risk to you in this situation.

But what about in other situations, such as when the mother is Rh negative, and the father is Rh positive?

Doctors would have you believe that you must get a Rhogam shot in this case, because otherwise you are in danger.  This isn’t quite true.  Up until a few years ago, Rhogam wasn’t always given to women pregnant with their first babies (unless trauma occurred) because if blood mixing occurred, it typically happened at birth.  The woman then produced antibodies against Rh postive blood, but since the baby was already born, it was safe.  A Rhogam shot was then recommended in subsequent pregnancies, so that the woman’s body wouldn’t reject the baby if it had Rh positive blood.

In a normal pregnancy, though, mother’s and baby’s blood does not mix.  The only danger is if this happens, and under normal circumstances, it will not.  Pregnancy is designed so that blood just doesn’t mix.  However, if the mother sustains abdominal trauma or birth trauma then it can happen.

Situations that may cause mom’s and baby’s blood to mix:

You may find that a birth center or homebirth are better options for you.  This is especially interesting because issues with blood type incompatibility were extremely rare before the 1900s, when we didn’t intervene with birth very often.  Suddenly, when we “medicalized” the birth procedure, this became a problem.

In one study, only about 14% of women who were not given a Rhogam shot ended up “needing it” later (there are no details given on why they needed it).  86% did not require it at all.  It is possible to do a titer check to see a woman has become sensitized to assess if she needs Rhogam.

The truth and bottom line?  Most women do not need Rhogam.  First-time mothers do not need it.  A dose at 28 weeks is unnecessary unless a test shows sensitization has already occurred.  And if birth is trauma-free and/or if baby is type Rh negative (even the manufacturers of Rhogam agree none is needed if baby is typed Rh negative!), none is needed.  If, however, trauma does occur, sensitization is known to have occurred, and/or baby is typed Rh positive, it would be wise to consider this.  Please ask your doctor to share all known side effects and risks (which, by the way, are greater if given during pregnancy than immediately after) before making a choice.

What do you think about Rhogam?  Are you at risk?  Did you/would you receive it?