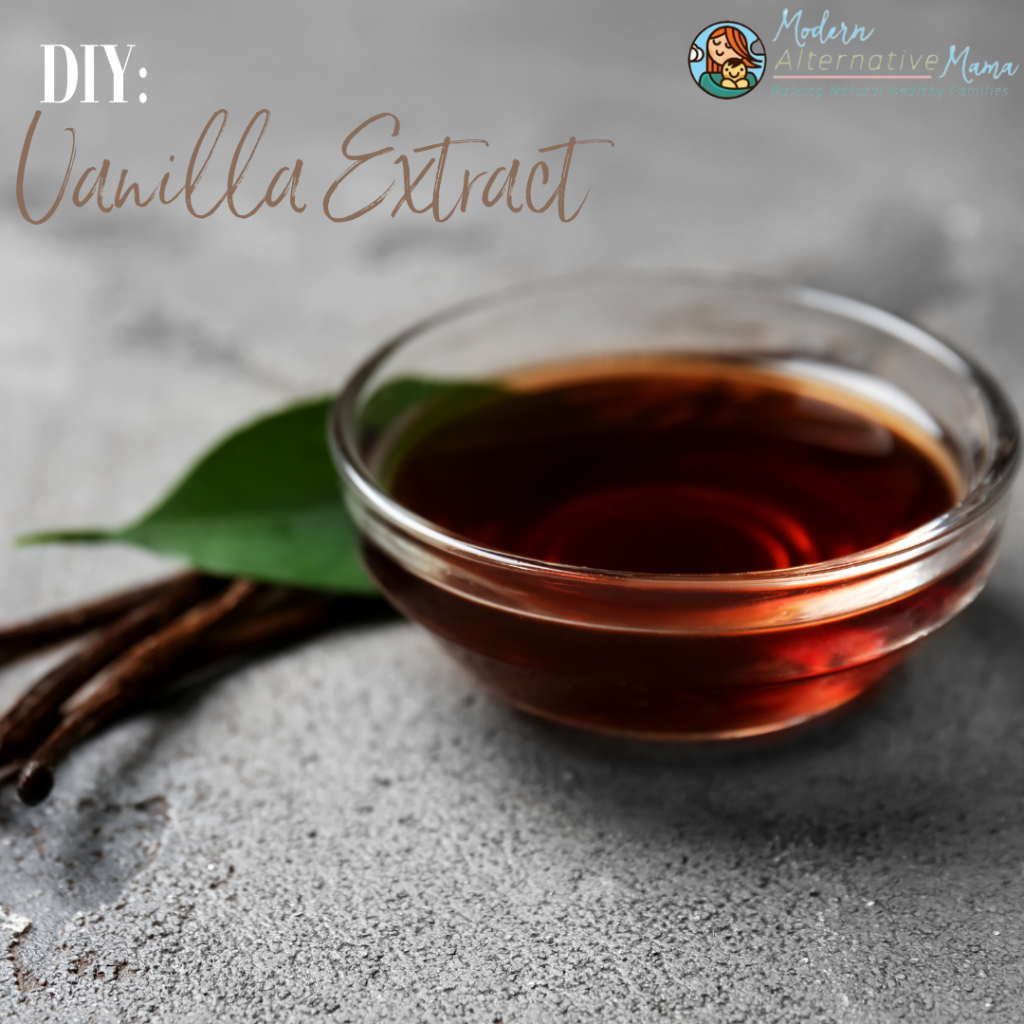 Do you use vanilla extract in baking?  I know I use mine a lot for baking, homemade ice cream, and other things.  There are a lot of reasons why I choose to make my own extract for these purposes, which I will share with you.  And then I’ll get to the good part: how to do it!

So why do I make my own?

Yes, really!  Even “pure” extracts can sometimes have corn syrup and other additives.  The good, organic vanilla doesn’t, but….

That organic vanilla is expensive!  To avoid corn syrup you have to spend a lot more money.  Who wants to do that, especially if you don’t have to?

I was able to buy an 8-oz. package of good vanilla beans (I chose bourbon vanilla, though next time I’ll probably try Tahitian) for only about $25.  This ended up being around 50 beans, so it was a great price!  If you buy at a health food store, expect to pay $2 – $4 per bean.  Since they’re not grown locally anyway it doesn’t matter that much where you buy from.  I got mine from Amazon (yes, that’s an affiliate link above).

You also need some type of alcohol.  It needs to be 80 – 84 proof.  Vodka is the “usual” choice, bourbon is also common, and you could choose rum or other types as well.  A reader on Facebook told me that he used rum because it’s sweeter.  I decided to give it a try in my latest batch.

Legally, an “extract” must be made with .8 oz. of vanilla beans per cup.  This works out to about 8 beans, or one bean per ounce of alcohol.  I choose to use slightly more; I usually use 5 vanilla beans for 4 oz. of alcohol.  If you use less, it will still taste nice, but it will officially be a “vanilla liquer” instead of a true extract.  Many chefs use a “double extract,” which is twice as many beans!

Brown glass is also important to protect your extract from light.  I honestly don’t remember exactly why, but you do not want to expose it to light. Cut your vanilla beans into pieces.  Mine fit best when cut in half, like this: If you look very closely, you can see the edges of the vanilla bean and the black insides.  The inside is full of tiny little black specks, called the caviar.  This is the good stuff that gives the vanilla most of its flavor, as well as what gives vanilla bean treats their speckled color!

You can choose to use your knife to scrape out the caviar and add it to the bottle separately.  Plenty will be released while the extract is brewing, too, if you don’t want to take the time.

Now, add your beans to your bottles: Once all your beans have been added, pour in your alcohol until the bottle is almost full: (This one was tricky to take by myself, but I managed, just for you!)

By the way, we don’t drink alcohol, so I’d never actually purchased it before myself (the first time I made vanilla my dad brought me some).  I also look really young, like some people think I’m 16.  So Friday afternoon I walked into a liquor store and bought this bottle of rum and a bottle of brandy.  Two big bottles of serious alcohol and nothing else.  I can only imagine what the guy who rang it up was thinking!  Curiously, he didn’t ask to see my ID.  Then again I had my wallet open with my ID visible so maybe that was good enough?

Anyway, once your bottles are filled with alcohol, screw on the caps.  You are done!

The vanilla needs to sit for at least one month, and preferably six, to be “done.”  Set the bottles into a dark place (your pantry?) and remove them and shake them at least once a week, or whenever you think about it.  Your beans will be softening and all that nice caviar will be coming out into your extract as you shake it.  This is why the bottles shouldn’t be completely full, because if they were you wouldn’t be able to shake them well.

That’s it!  In a month (or so) you’ll have yummy, homemade vanilla extract, which you can use yourself or give as gifts!

Update 3/12/12: I have made vanilla for a year and a half now.  My favorite combination is bourbon beans with rum.  I also like Tahitian beans with rum, which tastes sort of like root beer.  Dark rum is better (to me) than light.  All these vanillas are unique!  And although I’ve made it several times, I still have never tried it the “normal” way — with vodka.

Have you ever made vanilla extract before?  Do you want to?