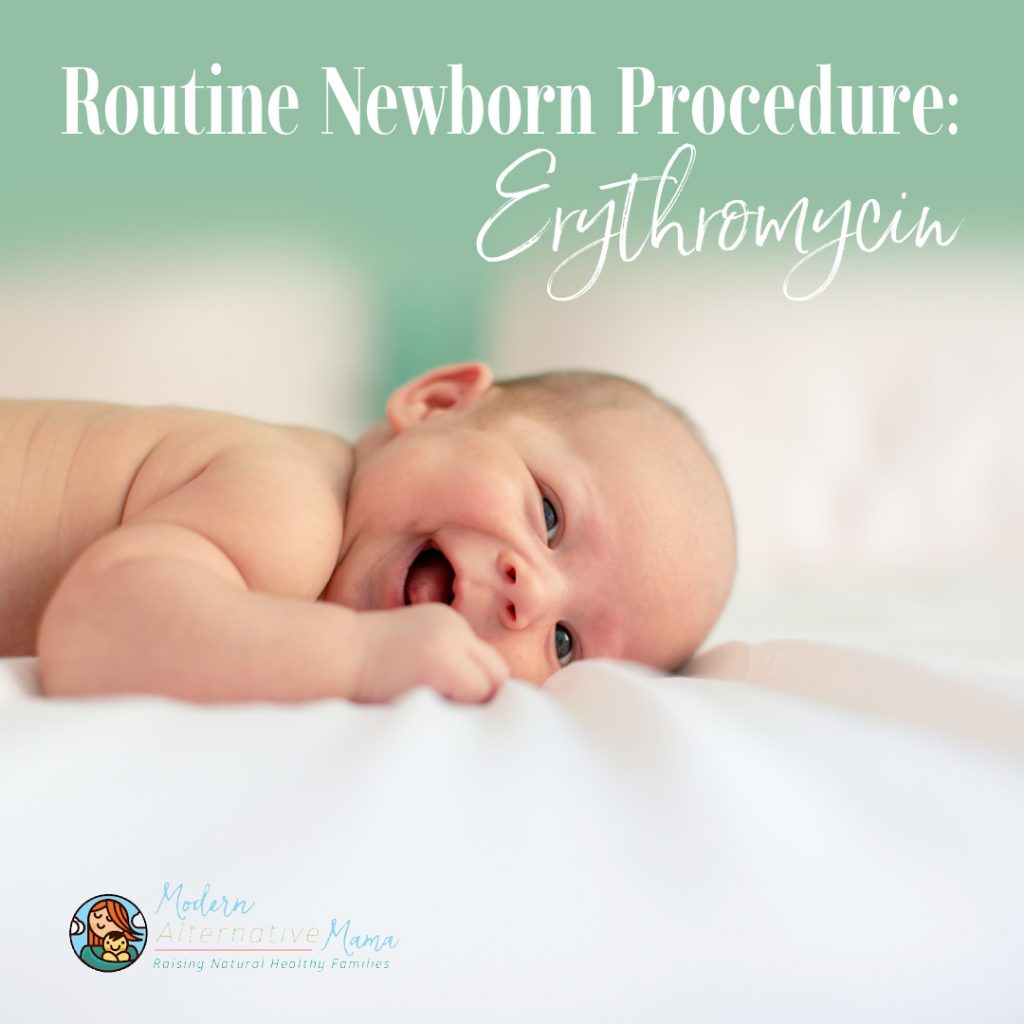 As a new mama of my baby boy Liam, I was set on having a natural hospital birth. In preparation for my birth plan and researching what I wanted precisely, I came upon the so-called “normal ” routine newborn eye ointment. This was mind-boggling to see such an old, 1800’s rooted routine still being described to mother’s as necessary or normal today.

Although many hospital births consider this “routine” erythromycin eye ointment vital, my child would not be any part of it. Considering I know that both my husband and myself have no STDs, I will decline this procedure.

FYI, you have every right and choice to say “NO.”

While I continued learning more about natural birth and practices, I questioned if this routine newborn procedure was needed. It is not okay to make it mandatory if not every mother will test positive for infections.

Maybe you’re a new mama to natural health or experienced, but are curious about this eye ointment called erythromycin and why it’s still being used today.

Let me share more of the history of this eye ointment, benefits, risks, other options you have, and making your own informed decision.

What is Erythromycin Eye Ointment?

Erythromycin eye ointment is commonly used in hospitals immediately following a baby’s birth to prevent infection of the eyes, such as neonatal conjunctivitis or called ophthalmia neonatorum.

This infection causes inflammation of the conjunctiva in the first four weeks of the infant’s life.

It was rooted in the late 1800s; 10% of babies born in European maternity hospitals then acquired this infection. But only 3% of those newborns were left permanently blinded. (1)

Doctors didn’t know how to prevent or help infants who caught this infection for some time. Then a physician named Albert Neisser came upon the discovery of a sexually transmitted disease called gonorrhea. It is passed through the birth canal from mama to baby during vaginal delivery.

A German physician named Carl Crede discovered a treatment using silver nitrate solution and required the use of this with every newborn in hospitals, even before seeing signs of infection. Down the line, this showed adverse effects causing infants severe problems. (2)

Now it’s not used in the U.S., and doctors only use the antibiotic erythromycin to prevent ophthalmia neonatorum.

But it is unnecessary for every infant, and not all mamas will have STDs! Sadly, many states by law mandate this eye ointment to be given within 24 hours after birth to every infant despite the mother’s status.

Countries such as Denmark, Sweden, and the United Kingdom, do not use an erythromycin eye ointment. Instead, they closely monitor newborns and begin antibiotics only if they contract neonatal conjunctivitis.

Wow, this is how it should be everywhere else, am I right!?

Who Benefits from Erythromycin?

Erythromycin eye ointment can be super beneficial if necessary, but if not needed, you should have the choice to say no.

Here are some reasons it may be beneficial:

Prenatal care is not always available, and in certain areas, STD testing and treatments are limited to mothers. It’s not always an option for some women where infections are high.

In this case, this eye ointment is helpful for newborns to protect them from chlamydia and gonorrhea infections.

Are you considering using this erythromycin routine eye ointment for your newborn? I want to share the risks of the possible side effects of using erythromycin within the first 24 hours of your infant’s life. Of course, you can always reconsider your decision and change your mind!

Mothers do not have to use this ointment knowing they do not have a sexually transmitted disease or have been screened and tested for STDs during pregnancy.

Also, did you know that according to a study, erythromycin doesn’t always prevent neonatal conjunctivitis? Applying the ointment does not 100% guarantee a newborn will not be infected. (4)

Trying to take this choice away from every mother is not okay! Many hospitals portray this eye ointment as “vital or necessary” for your child, but in reality, it is 100% OK for you to question the risks and side effects and say “no thanks.”

After researching how hospitals try to normalize the need for this erythromycin eye ointment, you may want to switch to a midwife and home birth completely.

There is also the option of having a doula in the hospital room if you physically can’t have a home birth and want to ensure your birth plan is adequately performed, including not getting this eye ointment.

It is crucial to constantly educate yourself on the risks and benefits, so you feel fully prepared for such procedures.

Something I did that prepared me during my research was having a birth plan written out for myself and all of my nurses and doctors to see. My doula suggested a template, which made me dig into the things I never even thought about, including this eye ointment option.

Also, if you are a woman who doesn’t know if you have a positive STD test for chlamydia or gonorrhea during your routine testing in early prenatal care and are in a monogamous relationship, you can decline the ointment if you feel comfortable doing so.

Typically this can be done by signing a waiver.

Do your research. It is vital for you and your baby. Learning all the normalized hospital procedures, possible risks, benefits, options, and decisions will give you a sense of peace, readiness, and confidence. You can then tell your provider exactly what you want and what you don’t.

You have every right to speak up about your personal medical decisions, and you and your baby’s health choices should always be the top priority.

Whatever you end up deciding, make sure it is an informed one.

Check out this Healthy Pregnancy Bundle, it includes some of my personal favorite top products for a natural healthy pregnancy!

Have you considered excluding this in your birth plan?

Mariah Leach
A holistic health enthusiast who loves all things related to natural living, natural eating, and helping others. She has two years of experience as a health and wellness copywriter. Someone who desires to help others share simple natural ways and/or products that help steward long-lasting health in others. Her dream is to start her own health blog with tips, tricks, and encouragement for those who need help starting their health journey.
AD