How Unschoolers Learn To Read |
AD 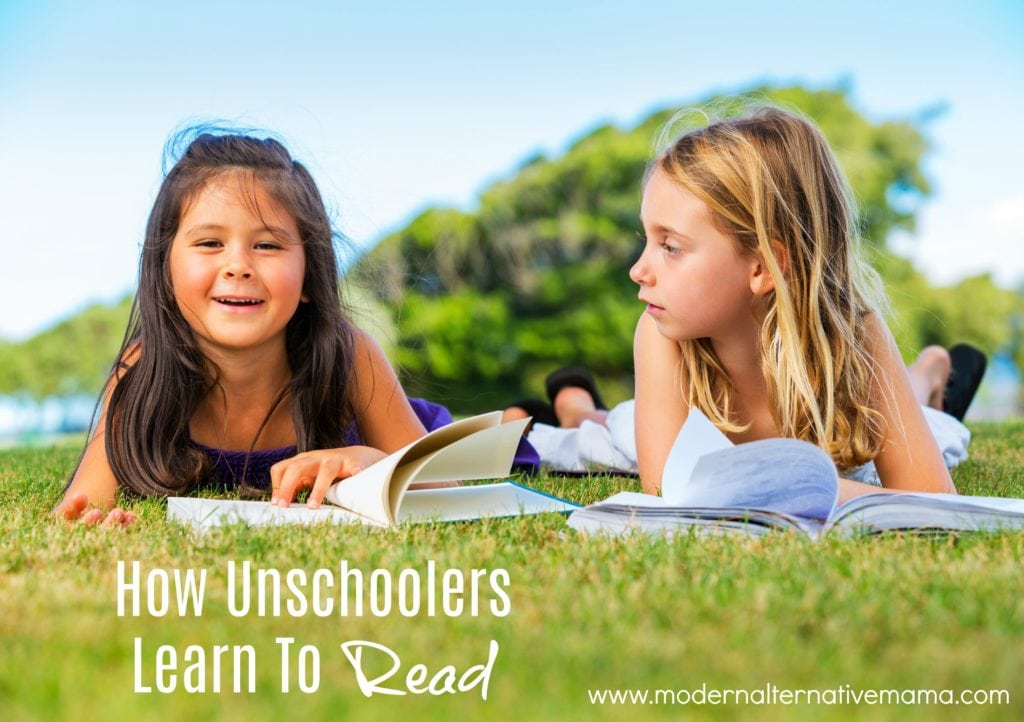 How Unschoolers Learn To Read

A few months ago, I asked my kids if they wanted to read with me.  My 9-year-old had been asking, but never seemed to remember until 10 at night — too late to start.  So, it was early evening and I invited them in.

But this time, he ended up reading most of the book on his own!

More recently, my 5-year-old brought me a book and asked me to read with him.  I still had to read about 90% of the words, but…he was definitely starting to pick up on some here and there.

…and that makes three (or so).  Three unschooled kids who “somehow” learned to read, with no formal instruction.

How Unschoolers Learn To Read

This obviously isn’t universal, because no kid is exactly the same.  What makes the most sense to one won’t work necessarily for another.  But this is what worked for us.

We tried all the “usual” things with our oldest…sight words, daily reading practice, writing skills when she was 6.  It didn’t work, because she wasn’t ready.  In fact, it frustrated us and her, and after we took a break, she basically forgot it all.  (We haven’t talked about this publicly, but we are pretty sure she is dyslexic, which is why it took so long for her.  We have done assessments both online and with our local assessor about this and have chosen things to help her when needed.)

Then, there was the summer that she was 9.

We decided to go to the library and sign up for the summer reading program.  It would be a goal for us, to try to earn all the prizes.  The kids were very motivated, and got several “early reader” books that day.

As soon as we sat down, it was obvious that both my 7 and 9-year-olds could read — at least most of the words in these easy books.  And we hadn’t “taught” them any of this!

Here’s what we did:

Select books from the I Can Read series, in levels “My First,” “Level 1,” and “Level 2.”  Parent sits with the child and the child reads, but parent assists as needed — helps to sound out words, reads difficult words for them.  Over time, they read more and more of them on their own.

We also used simple, repetitive books like these.  My 5-year-old is enjoying these right now, because he starts to pick up words.

Select slightly harder books that are around 3rd – 5th grade level and ask them to read these.  We chose Captain Underpants and Diary of a Wimpy Kid.  At first I read to them…and after a couple months, they read to me.  And then they read silently and independently.  (My now 9-year-old can read a 200-page chapter book in a day or two now.)

Write each other silly messages.  We would sit at my computer and type to each other.  “Mom, you are a poopy butt” and things of that nature.  But whatever…gets them reading and writing!  They also like to borrow my phone to text grandparents often.

That’s pretty much it.  We read easy books together, then harder books, then…they just knew how to read.  We didn’t need fancy curricula, or games, or other reading-like things.  To learn to read, we just READ.

The Phases Kids Go Through in Reading

I noticed each of my kids (so far) going through specific phases while reading.  Each has been a little different in their approach, and some have spent longer in certain phases than others.  My daughter, because of dyslexia, did spend the most time in some phases and seemed to have more small phases than the boys did.  But that is not uncommon — we have several friends with dyslexia (adults and kids) and they do the same things.

By the way, being patient with her and allowing her to move at her own pace has been key.  Pushing her doesn’t work — and frustrates us both.  She still doesn’t read for pleasure.  But she enjoys reading to cook, or reading text messages, or to learn various things.  She primarily sticks to non-fiction.  Although we did discover these new Disney princess novels, and she does read those from time to time.  Respecting her preferences and understanding that it doesn’t matter WHAT she reads has been very helpful as well.

Every kid went through basically these stages.

They had no idea how to read, and would say words completely at random just to try to participate.

They would guess words, but these words would be based on the pictures in the story.  For example, if kids were playing at a park, they might say “playground” or “jumping” based on how they interpreted what was going on in the picture.

They could remember important words that were repeated often in the story at this time — for example, if the book’s theme was “Eat pizza…” and Each sentence something like “Eat pizza hot.  Eat pizza cold.  Eat pizza in a house,” they would remember ‘eat’ and ‘pizza’ after a couple sentences.

Step 3: Guessing Based on Similar Words

At this point they were actually reading a bit.  They would attempt to sound words out, but if they couldn’t, they would guess similar-sounding words.  For example, ‘can’ instead of ‘cat.’

Important words were still easier than high-frequency words.  I found it was easy for them to ignore words like ‘the,’ ‘it,’ ‘and’ but they would remember words like ‘play,’ ‘beautiful,’ or ‘pony’ because those meant something to them and stood out.  After observing this in multiple children, I really don’t think that starting with high-frequency words is the right approach.  Kids learn things that interest them…not things that we, as adults, perceive as easy.

At this point, they were actually reading, and if they came up to a word they didn’t know (maybe 10 – 20% of the words at first), they would sound it out, and sometimes come up with the wrong sound.  Such as short ‘e’ instead of long ‘e.’  Once corrected, they would remember that word pretty easily.

“Word guessing” is supposedly problematic, and in the mainstream, they say you have to stop them from doing it and force them really read.  I have found that it’s about the kids being willing to, in the words of Dr. Ken Robinson, “have a go” at something they may not know.  Obviously, if they choose the wrong word(s), correct it by saying the right one(s).  But no need to make a big deal out of it or start an intervention to try to force them to read correctly.  They will get there.

And, personally, I think that some may become frustrated or embarrassed if pushed at a pace they aren’t ready for, and may come to believe that reading isn’t for them, or that they are dumb.  ALL my kids did/are going through all these phases, and three of them have moved past them and can read just fine now — without any special curriculum or interventions.

The only way to get better at reading is just to do it.  There are no special games, activities, worksheets, etc. that substitute for just reading.  (One exception is with learning disabilities — some kids need to read while they do certain activities, to retrain their brains a bit.)

Reading will come!  We’ve got confident and emergent readers over here, and I know you will, too. 🙂

How did your unschoolers learn to read?