Water Filtration: What You NEED to Know |
AD 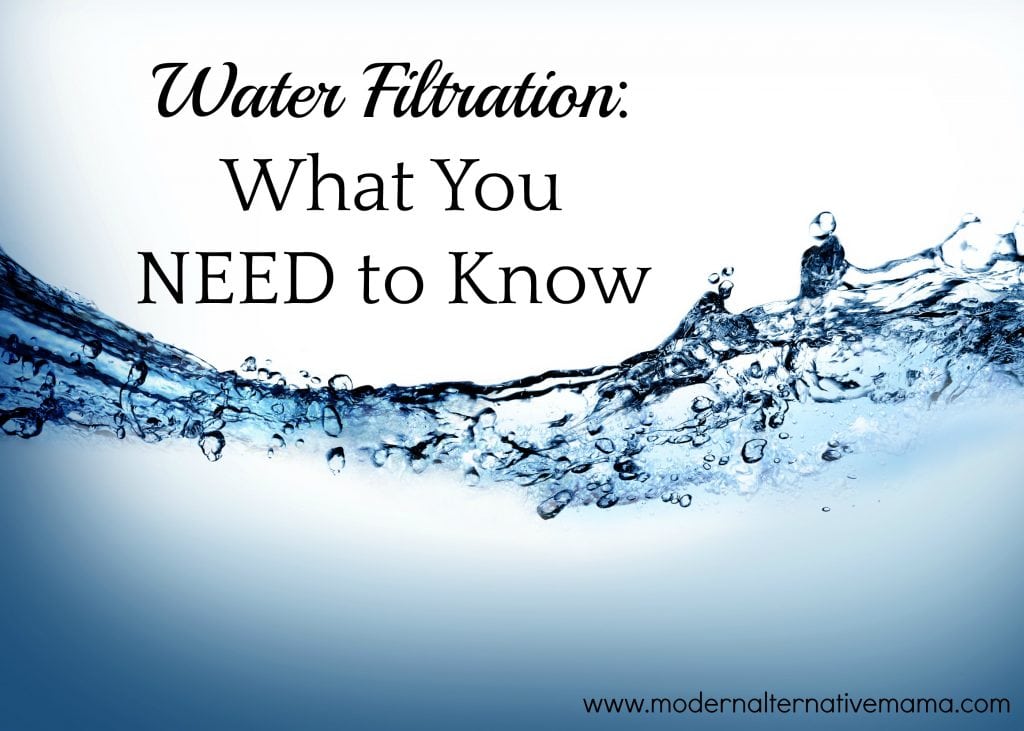 Water Filtration: What You NEED to Know

In our homestead, having a quality whole-house water filter was at the top of our list.  Clean water matters so much to overall health…and just filtering our drinking water wasn’t cutting it.

This is such a complicated topic, with so many different companies offering options, all claiming that theirs is the best.  And every system has different components to it, so there are multiple ways the water is being filtered.  What’s truly best?  And how are you supposed to know?

What’s In Our Water?

It seems like the water coming in from the tap should be safe and healthy…because why would the government do something if it weren’t safe?!  (Oh, how I wish that were true.  But it never is.)

After this process, water may still contain:

*Drugs get into the system because people either flush unused prescriptions, or when they consume them and unmetabolized drugs are excreted from their bodies.  All of these drugs aren’t completely removed from the water, and we obviously shouldn’t be exposed to these chemicals!

+Added on purpose by the water filtration plant in most cases (fluoride can be naturally occurring and about 1/3 of the areas in the US do not add it).

^From farm run off.  Phosphates and other farming chemicals may be high in certain communities.

If you check google, you can find your city’s water report, to see if they are in compliance with the EPA laws for contaminants.  But the EPA doesn’t place limits on prescription drugs and some of these other contaminants, so even if your water is “compliant,” it is still not clean.  And that’s a problem!

What Do I Want From a Water Filter?

The simple answer is, pure, safe water.  The detailed answer is a whole lot more complicated.

We obviously want to remove the contaminants that shouldn’t be there, like chlorine, pesticides, and herbicides.  And, we want to remove dangerous bacteria or viruses that could make us sick.

But there’s more to this than that.  What is biologically normal water?  What kind of water are we supposed to drink?

In nature, water is not pure.  It has quite a few trace minerals, like calcium, phosphorus, magnesium, potassium, and others.  It also has a normal pH of around 8 or so.  This seems to be the water that we were meant to drink.

So, that’s our goal: to end up with a water that has a slightly alkaline pH, that retains beneficial minerals, and that is otherwise as “pure” as possible.

Water Filtration: What You NEED to Know

So, what are we supposed to do?  What kind of water filtration should we be using?

First, I don’t recommend any of the pitchers that filter water.  These pretty much just filter out chlorine, but nothing else.  They don’t filter out enough “stuff” to be worth it, so we’re just going to ignore these.  Instead, we’re going to look at the “main” types of water filters, both counter-top and under sink, as well as whole-house systems.  (We’re looking for the whole-house version, so that’s mostly what I focused on.)

There are two main “styles” of these filtration systems — RO (reverse osmosis) and carbon-based (like Berkey).  But each of these actually uses a variety of filtration parts…and this gets complicated…so hang with me.

Most systems have a combination of these different types of filtration in order to purify water the most.  But… there is actually a risk of “over-filtering” water that is rarely talked about…and there are some serious health risks associated with it.  (And a whole lot of fancy, expensive products that try to mitigate it, without properly explaining it.)

Every system uses some version of a pre-filtration set up.  It’s essentially some kind of membrane with holes that are 1 micron in size (that’s 1/25,000 of an inch).  This catches all types of sediment and junk that shouldn’t be in the water, plus larger bacteria.

It’s a start, but it won’t make water truly safe.  A lot of the “bad” stuff is much smaller in size than this, or is dissolved in the water and can’t be physically separated.

Essentially, this is a chemical reaction between the copper and zinc and other minerals/heavy metals in the water.  It helps to remove chlorine, iron (not necessarily beneficial), and may reduce bacteria and viruses somewhat.  It isn’t adequate as a filter on its own, but its use can make carbon filters last longer, so it’s often used with it.

Activated carbon is a highly porous surface that adsorbs (yes, with a ‘d’) a lot of bacteria, viruses, pesticides, herbicides, and other contaminants, trapping them on its surface and removing them from water.  It won’t remove nitrates or fluoride, which is a big deal for many.  Well — it will remove some fluoride, but its capacity to do so expires rather quickly, long before its capacity to filter everything else expires.

To make this more complicated, carbon can be made in different “levels” and from different materials, and it can be more or less effective, depending on these factors.  It’s often paired with an RO filter, to remove the worst of the contaminants before it gets to the end.

This is very similar to activated charcoal.  Both are produced by burning a material without oxygen presence.  But while activated charcoal is some plant material (often wood or coconut shells), bone char comes from the bones of animals, usually beef bones.  This is important, because it’s high in calcium, and it chemically reacts with fluoride and essentially removes it from the water.  (Turns it to an inert substance.)  It also removes arsenic.

This is ethically questionable for some, obviously, since there’s the use of animal bones.  And, I can’t find clear data on whether or not it removes other metals, like magnesium.  No one seems to have studied that, but knowing that most other methods that remove fluoride also remove all beneficial minerals, I’m leery.

This is another method that removes fluoride and arsenic, but some believe that aluminum can then leach into the water, and that causes its own problems.  (source)  This is what the Berkey white filters are made of — aluminum oxide.  I can’t find test results on whether or not these remove beneficial minerals, although sources claim they do not.

This is a type of filter that uses special light to kill bacteria and viruses.  It’s not enough on its own, but it is often the final step in a filtration process.  There are no known “issues” with this type of filtration.

Then, we get to the RO.  This technology was originally created to desalinate sea water (remove the salt) and it’s very effective at this.  However, it does not remove all contaminants…especially chlorine, VOCs, and some bacteria and viruses.  It’s usually paired with a carbon filter for this reason.  It does strip the water of important trace minerals, like calcium, potassium, and magnesium, and it leaves the water with an acidic pH.  It’s basically just good for removing salt and fluoride.

The WHO considers water that is stripped of these beneficial minerals to be unhealthy.  In fact, in a report they issued, “The final report, published in 1980 as an internal
working document (3), concluded that “not only does completely demineralised water (distillate)
have unsatisfactory organoleptic properities, but it also has a definite adverse influence on the
animal and human organism”.”

One study shows that when RO water is used for cooking, it leaches minerals from food significantly.  This “soft” water consumption has been associated with increased risks of pregnancy complications, cancer, and death.  Another study showed an association between RO water and B-12 deficiency…which too many of us lack already!

Yet another study called the water “biologically unstable” and showed that it is a potential breeding ground for bacteria…which is kind of the opposite of what we’re going for.

The water is also tough on pipes, and can leach minerals from them…which may be minerals you don’t want in your water.  Many pipes have iron, some old ones still have lead….  At any rate, this is not ideal.

RO water also wastes a lot of water because the system requires flushing and can’t all be properly filtered.

As a side note, we’ve had RO water in bottles for awhile and I always feel so much thirstier when I drink it…it feels wrong…which is what started me researching why that might be.  It’s likely because it is leaching minerals from the body…creating a deficiency of electrolytes and vitamins…and harming health over time.

What About Remineralizing the Water?

I looked into this option, although to be fair, I was already against it.  I had tried two of the top clean, pure organic minerals supplements in the past, and had both had given me bad headaches.  But I wanted to understand why.

One brand, ConcenTrace, is simply concentrated water from the Great Salt Lake.  I saw no guarantees that it was free of contaminants, and as it’s exposed to the same environmental concerns as is the rest of our water…why would it be clean?  It adds back some fluoride and other things that RO strips, so this doesn’t seem beneficial to me! (Their product info)

Another brand, Dr. Berg’s, has a long list of trace minerals that are in it, including bromine, cesium, and other elements we don’t really want in our water…and the statement that the minerals in the product “include, but are not limited to…”  That doesn’t seem like a safe option, either. (Their product info)

Even if there were a truly safe, contaminant-free mineral supplement to add back to the water, it would depend what form the minerals were in, how much was in it, etc.  And, it’s yet another step to create drinkable water, and one that’s unnecessary if you don’t strip it all out in the first place (for very little benefit).

We can eliminate RO filters immediately, because the water has serious drawbacks and, in my opinion, not a lot of benefits.  It’s also more expensive.  Frankly, I consider it dangerous for many, and I would never have one in my home.

A combination of a quality carbon filter made from coconut shells, with copper-zinc mineral stone, and a UV filter seems to be optimal.  If fluoride is a huge concern for you (and it won’t be if you are on well water or one of the 1/3 of people whose cities do not fluoridate), then you could add a bone char filter too.  Although I’d like to see more research on the bone char option, personally.

I have not decided yet on which company we will go with, but now I know what I’m looking for and what questions to ask.  Once we decide on a system, I’ll get back to you all and let you know what’s out there!

Does water filtration concern you?  What system do you use?