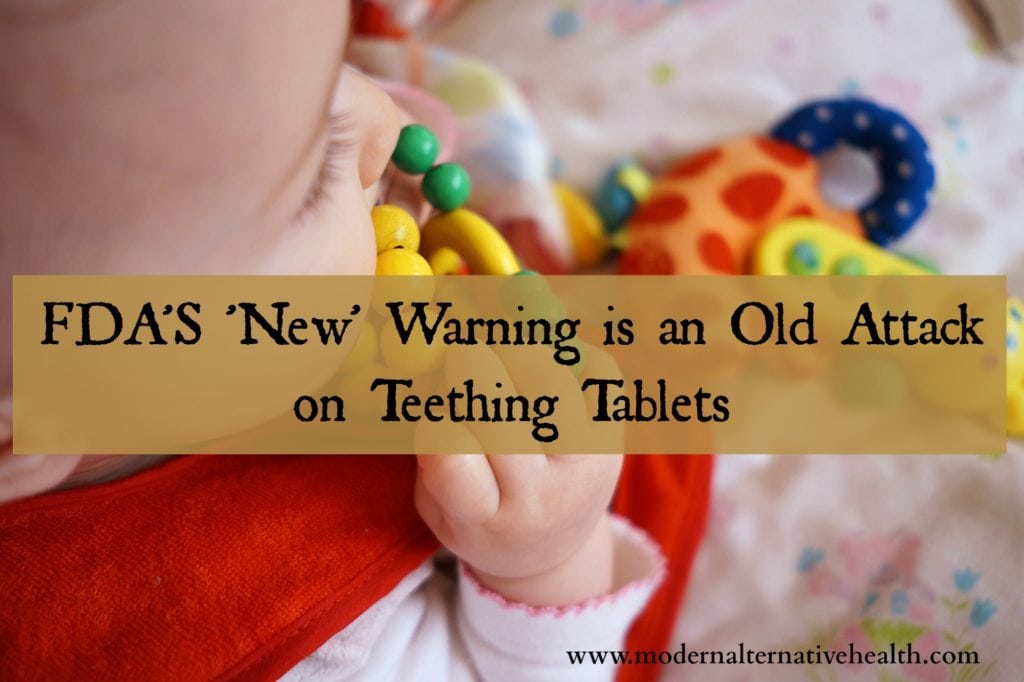 FDA’S ‘New’ Warning is an Old Attack on Teething Tablets

The FDA recently issued a  very urgent sounding press release warning parents of the supposed dangers of using popular homeopathic teething remedies. In the release, it stated, very vaguely, that homeopathic teething tablets may pose a health risk, and goes on to urge parents to immediately discontinue use and also seek immediate medical care in case of a host of symptoms following the use of teething tablets appeared. The symptoms stated in the press release ranged from seizures to difficulty breathing to constipation. It all sounds super scary. Which, if one does not understand the full picture of what homeopathy is (and isn’t!), then it could be.  Unfortunately, homeopathy, and the concerns surrounding this unfair vendetta against a well-established and well-respected homeopathy brand (as well as homeopathic remedies in general), is getting yet another unfair bad rap by way of a fear filled press release with no substance to back it up.

Hyland’s, the main brand referenced in FDA’s press release, had this to say about the ‘investigation’:

“Homeopathic medicines are regulated as drugs by FDA. We are fully cooperating with FDA’s inquiry and we’re providing them with all the data we have. We also hope to learn from FDA what facts, if any, the Agency has based its action on.”

Did you hear that? Even the company that is coming under fire doesn’t know why the FDA, the very same regulatory board that approved the products to be on the shelves in the first place, is suddenly issuing such a strong statement about the safety of their product!

To fully appreciate the full extent of why the FDA’s press release is so wrong, one needs a small crash course in what homeopathy is, and isn’t.

Homeopathy is not a catch all term for anything natural or alternative.  Homeopathy cannot be used interchangeably to describe a remedy that is herbal in nature, or an essential oil, although those things are wonderfully healing as well.  It is important to make this distinction, because homeopathy is its own system of medicine.  It is used worldwide; in fact the British Royal Family has used homeopathy as its main medicine for generations. There are whole hospitals that are homeopathic in nature.

So what is it?

Homeopathy was developed in the 18th century by a German physician named Samuel Hahnemann.  He developed homeopathy based on what is known as the Law of Similars: a substance that causes a certain set of symptoms in an otherwise healthy individual will cure an illness with those same symptoms, and will do so homeopathically when given in minute amounts.  How minute? To borrow, again, from Hyland’s press release, in the case of the teething tablets, “two trillionths of a milligram in a tablet.”

How does something so minute even offer healing benefit? The other leading principle behind what sets homeopathy apart as its own system of medicine is the way in which the medicine is prepared.  The substance used in a particular remedy is made into a tincture and then is diluted in either water or alcohol, and then mixed vigorously by a method known as succussion. This whole process is known as potenization, and the different potencies of a remedy are labeled in such a way that you are able to tell how dilute, or potent, it is by looking at the numbers and letters on the bottle.  The most commonly used homeopathic remedies (especially for home care situations) are measured in the Roman numerals ‘C’ (diluted in a ratio of 1 part substance to 99 parts water/alcohol) and ‘X’ (diluted in a ratio of 1 part substance to 9 parts water/alcohol).

The hallmark of what makes a homeopathic remedy a healing substance is the combination of the dilution, as well as the vigorous shaking.  As you can tell by the sheer amount of dilution going on, many potencies of remedies don’t even have the original substance left in the end product! However, when studied under a microscope, the structure of the water of the homeopathic remedy is actually changed in the potentization process!

One of These Things Is Not Like the Other

The homeopathic process of potentization takes something that begins as toxic in its original form and renders it as something healing, and even curative in its homeopathic form.

The FDA is not acknowledging this at all in their press release, instead referencing back to their original investigation in 2010, where they made reference to merely the presence of belladonna–a highly toxic plant–in the formulation of Hyland’s teething tablets, and a discrepancy in the amounts found in the tablets. This discrepancy launched a voluntary recall, and, while the FDA stated back in 2010 that there were reports of ‘adverse events’ following ingestion of teething tablets, they admitted there was NO conclusive link to it being from the teething tablets themselves.

The president of the company that is responsible for manufacturing Hyland’s teething tablets had this to say about the lack of uniformity in the amounts of belladonna from the 2010 recall:

“Where the situation became complex for us is that we were interpreting data in one way, and the FDA was interpreting data in a slightly different way. They [the FDA] found one tablet that had more belladonna in it than we had on the label. That really was the essence of problem. Their view was that that was an unacceptable risk. Our view was that, even with that risk, there was still a very large margin of safety with the product.”

The Homeopathic Pharmacopeia of the United States is the regulating agency that regulates the manufacture of homeopathic remedies.  Remedies that have been manufactured according to this standard will have the letters HPUS on its labeling to denote that it is in accordance with the stringent manufacturing standards set forth by this regulating agency.

And yet, Hyland’s has this to say about accidental ingestion of not one, but several BOTTLES of their teething formulation:

“A 10-pound child would have to accidentally ingest, all at the same time, more than a dozen bottles of 135 Baby Teething Tablets before experiencing even dry mouth from the product.”

And then there are studies that are now linking Tylenol use to the development of asthma. But where is the press release for this information?

Parents are often at their most vulnerable when their children are not feeling well. That’s why it is so important to arm yourself with accurate information to help you navigate through all the ups and downs of parenting without resorting to fear to make the decisions for you.

That does, and should include seeking out appropriate medical care when it is warranted.  Seizures, difficulty breathing and the like is a perfectly acceptable time to be seeking out that medical care, and for that, I agree with the FDA on that note.  I myself know firsthand how scary it is to witness a seizure, and the helplessness that accompanies it. My five month old at the time had what amounted to a febrile seizure, which I did seek medical care for, to rule out anything more serious.  Febrile seizures, as a side note, happen when a baby who is susceptible to them, spikes a fever too fast, not necessarily too high. (They are also completely benign.)  My son’s temperature was barely over 100 when he had a seizure, but he had gotten hot, fast.  It’s also important to note that fevers associated with teething are not very high, so febrile seizures could conceivably happen in the context of a teething related temperature spike.  Thankfully, my son ended up having a mild cold that resolved itself within a week or so, and is no worse for wear. Mamas, information is such a powerful tool to use and have.  I encourage those that are interested in knowing more about homeopathy to seek out additional resources.  Here are a few of my favorite ones:

What do you think about the FDA’s recent statement on teething tablets?